Prevailing Slacktivism across the World

Slacktivism is a prominent attribute of today’s generation. All over the world, ordinary people have a lot of opinions and views on the social and political issues surrounding them, which they want to express to the world. But, despite being motivated enough to shape their ideas intriguingly, the harsh reality is that they are too busy in their lives to come out of their comfort zone and fight for the cause. And, that is what has given rise to Slacktivism.

Slacktivism is the act of showing support for a political or social cause via the Internet, but with little time or involvement required, like signing an online petition or joining a campaign group on a social media website. 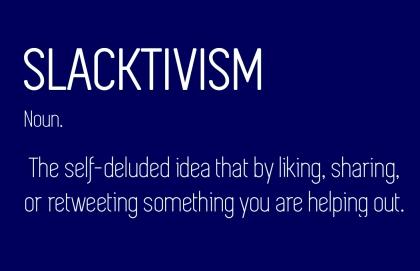 Even though it has a little practical impact in serving the real cause, slacktivists get a personal satisfaction that they have done their bit in contributing to the society. It is just a feel-good measure that requires little effort or sacrifice on part of an individual. Most of the slacktivists simply share the videos or sign online petitions in the comfort of their homes or offices, with others wearing T-shirts and bracelets embossing the name of the issues in cursive writing font. A recent cause, which has been criticized by many as Slacktivism, is the ALS Ice Bucket Challenge. It involved dumping a bucket of ice water on one's head to promote awareness of the disease Amyotrophic Lateral Sclerosis (ALS) and encourage donations for research. This went viral on all the social media platforms and everyone from celebrities to ordinary people were seen pouring water on their heads, nominating others as well as posting videos on You Tube, Facebook, Twitter, Instagram, etc.

However, it won’t be incorrect to say that Slacktivism has slowly become the ultimate democratization of the mass media. This is because every little step does help in moving towards the bigger change. Small actions such as Facebook likes, shares, status updates or re-tweets for social or political change does have a powerful emotional and psychological impact on the minds of the people. And, if enough pressure is built up on the issue, success of a social movement cannot be avoided. An example of this is the famous Anna Hazare movement for Jan Lokpal Bill, where thousands of people gathered together for the support. Mass Media played an important role in spreading awareness regarding the cause. Also, all the important meetings, discussions and decisions took place on the social media platforms.

At the first level, every member of a social network makes a decision of what is important to them, by either passing on the cause-related story or not. Even though this may not look as a productive step at the moment, but it will definitely help in spreading the mission in the long run. When seen from a broader perspective, the act of spreading information and awareness of an issue is generally the first step towards fixing a problem. It is easy as well as convenient, and hence, most slacktivists stick to the first level activities only.

At the second level, Slacktivists may purchase some items to show support for a cause. This commercialism is often denigrated, as most of the times only little or no money actually goes to the cause. This money could have been judiciously used to directly help the cause.

And finally, at the third level, only a small group of people remain, who are ‘moved’ enough to take necessary action. They help the cause by engaging in street protests, organizing rallies, putting political efforts, working with affected people, travelling to problem areas, etc.

These set of levels initially give a bird’s-eye view of the issue, with slowly moving to the real cause and matching with the traditional activism. In fact, many contemporary activist groups are also turning to Slacktivistic methods to spread awareness and increase funding. Therefore, Slacktivism is something which cannot be ignored.

That being said, not all causes can be served by Slacktivism, or even traditional activism. The changes incurred due to Slacktivism are not sufficient to devise deep social, cultural, political and economic changes. To obtain significant and quantitative changes in the society, it is necessary to come out of the houses and exceed the click of a mouse to put some real-time efforts instead of just haphazardly exclaiming a few empty sentences in cyberspace towards a societal injustice.