In a gory act on July 18, 2012, close to 100 workers at Maruti Suzuki’s Manesar plant turned violent, injuring close to 100 managers and executives, and set fire in the plant. It later emerged that the Deputy HR General Manager had been first maimed and then left to burn! This gruesome death and violence by an ‘angry’ mob of workers has brought to fore, once again, the tension prevailing between the management & the workers across the Delhi – NCR belt. 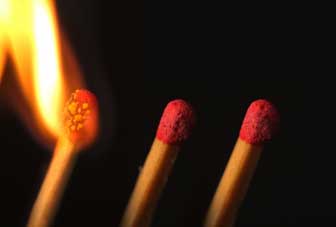 It wasn’t long back when the HR manager of Allied Nippon (Ghaziabad) was lynched to death by an agitating mob of allegedly ‘treated worse than slaves’ workers. A similar incident happened in Graziano Transmissioni in Greater Noida when its CEO and MD was killed by the workers. Apart from this, there have been several strikes in this region since 2006 across several companies including big names such as Honda Motorcycle and Scooters India Ltd.

So, what is it that’s causing such violent and inhumane reactions? Is it just the workers at fault, or is there a long routed and complex problem routed in HR practices? In this article, we analyze Maruti Suzuki’s case and try to make a head and tail out of it.

The root cause of last year’s strike was the mandatory signing of the ‘Good Conduct Bond’ which had certain provisions which were unacceptable to the workers, such as denial of a stay-in strike, among others. However, according to Maruti Suzuki India Ltd (MSIL), the good conduct bond had been made mandatory after 96 out of 437 cars had passed the quality check during a routine ‘Quality Checking’ exercise. This decision was initially rumoured to have been made mandatory as the quality issues were a result of deliberate attempts by the staff, which was later confirmed by MSIL when one of its representatives said that the “Good Conduct Bond has been mandatory for all workers as they had been deliberately stalling work and quality wasn't being maintained”.

A month later, the workers did agree to sign the Good Conduct Bond but discontentment had been high since then. A lot had also been said about the harsh work conditions such as the ‘7 minute tea & loo break’ during a full work day (which had been going on since 29 years) and the whole incident left a lot of acrimony between the workers and the management, including the Rs.2500 crore loss suffered by MSIL. And a few days back, we’ve had the condemnable incident which has caused more grave harm than ever before.

Almost everyone knows that the outer crux of the problem plaguing MSIL and other manufacturing setups is somehow connected to the long standing differences between a contract worker’s and permanent worker’s employment conditions. Every contract worker wants to be a permanent employee and almost every company wants more and more contract workers. This conflicting ‘demand’ creates problems for reasons which are pretty simple (See Table-1)

While Labor Laws of our country are not devoid of measures to protect rights of contract laborers, they are seldom implemented. Unless employers start to narrow the gap between the contract & permanent workers, the conflict shall never end, and perhaps rightly so, since even if I were to ask whether you would prefer working as a contract worker or a permanent worker, you would emphatically choose the latter.

As I write this, villagers surrounding Manesar are busy organizing a Mahapanchayat which is being attended by representatives from over 200 villages, to express solidarity with MSIL. They allege that it’s a political conspiracy than just an impromptu reaction by a mob and are pressing for a high level inquiry into the incident.  Similar thoughts are even echoed by people in some of the Unions and people from the Industry.

The management at many companies thinks of workers are mere resources and that is where the crux of the problem lies! The HR managers either don’t listen, or are not listened to, which creates worker angst against the management. The top bosses want more work, but are unwilling to solve the ‘problems’ being faced by the workers. 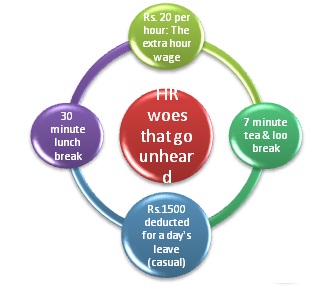 Tapan Mitra, Head of Human resources at Apollo Tyres says that most manufacturing companies exploit contract labour. “The management of any company needs to understand that workers are not commodities,” says Mitra. “Many times the HR department of the company doesn’t address the grievances of the workers. However, they want workers to work more when the company desires so. In such a situation, the workers reach out to unions to press their demands.”

From Workers to Killers: Who is at fault?

While I firmly detest any form of violent protest, are you not compelled to think about the reason/s behind workers turning into killers? In case you do, then you differ from what our investigative machinery and government think as both have a single track of mind. The party at fault is surely the worker, but they fail to reason the ‘WHY’ behind the actions, which is perhaps why such incidents are repeated!

Some, as the recently called Mahapanchayat, some trade unions, and even management insiders say, that there is a lot of politics involved in this whole issue. While that may be true, the question still lingering in my mind is that why is such politics flourishing? Surely, something is definitely wrong from the either end.

Among all the talk that we’ve done so far, it is imperative to halt and think whether the environment under which MSIL used work has changed drastically and if it was gleefully ignored by not just the HR managers, but by MSIL as a whole.

1. The Economic Environment Change: When Maruti Udyog first set up its plant in the Gurgaon-Manesar region in the 80s, the demographic and social profile of the ordinary worker was completely different from what it is today. The workers of today have seen their whole world change and the problem arises when they look into the mirror and find themselves in the same, worse or slightly better situation. Aspirations have indeed surpassed reality for them and somehow, the regressive & exploitative practices of manufacturing units have played a part in that, not to forget the rags to riches stories thanks to soring land prices.

2. Maruti Udyog to MSIL: Over the years, MSIL has been contributing more significantly to Suzuki’s global fortunes and with it has come a desire from the Japanese parent to control their Indian arm. Statements from Japanese counterparts in case of strikes and an ageing India MD have led to the     de-Indianization of MSIL.

3. Pressure on Performance: The competition in the Indian Automobile market has gone up manifold and today MSIL does not enjoy the position it used to in the past. It cannot afford to charge a large premium on its products and no one will wait for long for a Maruti when they have a Ford, Tata, Volkswagen and others waiting for them with a welcome tag! All this has put pressures to go leaner and produce more and while such practices are being followed everywhere, the management at MSIL has ignored the needs of the very people who make it MSIL! 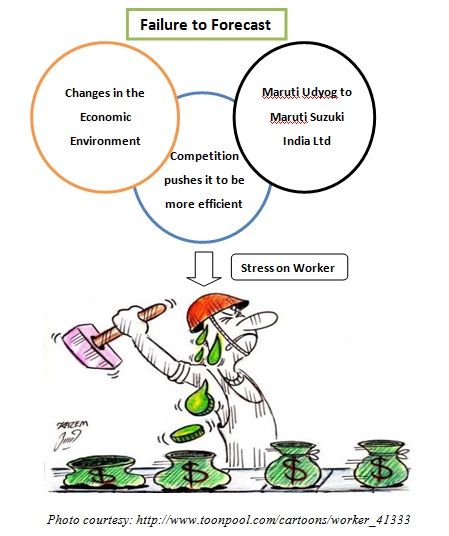 MSIL hasn’t been a stranger to strikes and that’s what perhaps made its management complacent of the problem at hand. While everyone, including the Labor Department, blames the workers (and so do I for the act committed by them is by no means worth arguing for and the guilty should be punished), they ignore the years of protests that have been going on at MSIL, the reasons of which are rooted in HR policies which assumes workers are mere resources which should be exploited in order to reduce costs.

The leadership and management team at MSIL have simply lost touch with reality and while this situation plays out to their advantage (considering their stand versus that of the unions), they shouldn’t ignore the signs today, and the same goes for other manufacturers. It’s high time that the HR managers step up to their task and listen to their people. A self realization needs to set in among the elite executives and managers that the workers are people like them only and thus, rather than treating the people that make the company as mere workers, the management as a whole, rather than just the HR team, should treat them as business partners and valuable assets.

This article has been authored by Syed Mohd Zain Inhonvi from LBSIM.