Trade Union Registration or Recognition in India: An Obligation Under Law?

Trade unionism is over a century old in India and is defined under the Trade Unions Act 1926, as any combination, whether temporary or permanent, formed primarily for the purpose of regulating the relations between workmen and employers or between workmen and workmen or between employers and employers or for imposing restrictive conditions on the conduct of any trade or business, and includes any federation or two or more trade unions. Trade unions are those unique organisations whose role has been understood differently by different groups of the society but the real role has been to protect jobs and earnings, better working conditions, maintaining fairness and equity and the social security of all its members. 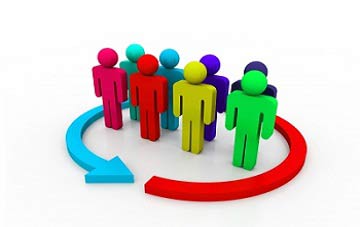 Any seven or more members by submitting their names and complying with other provisions under the act can form a trade union and shall apply for registration by making an application to the Registrar of trade union of the respective state. Every trade union applying for registration has to have at least 10% or 100, whichever is less, persons engaged or employed in the Establishment or industry with which it is connected, on the date of making of application. The trade union shall have a name which is not identical to an earlier registered trade union and also, a registered office where all communications and notices to a registered union may be addressed.

Any person who has attained the age of fifteen years may apply for the membership under a trade union but there is no rule that a person has to be a member of a trade union. Even if a person is not a member of any trade union he/she may enjoy the benefits the members may get with respect to agreements made for wage revision or other welfares. Trade unions have right to declare strikes and to do certain acts in furtherance of trade disputes and the members and office bearers of registered trade union are not liable criminally for conspiracy and also enjoy immunity from civil suit in furtherance of such acts as permitted under the Trade Union Act. Registered trade unions have certain obligation like filing annual returns to the registrar and maintaining of accounts etc. and non-compliance to these may call for cancellation of registration.

The recognition of trade unions by employers was felt to ensure that appropriate modes of collective bargaining took place and that the agreements were collectively reached and mutually observed. Collective agreements to settle disputes can be reached with or without recourse to the conciliation machinery set up by the legislation. A bi-party agreement between one trade union and management is not a binding on members of another or other union(s). However, if a settlement is arrived in the course of conciliation proceedings, then it is a binding as mentioned under section 18 of Industrial Disputes Act, not only on the actual parties making the settlement but also on all other members concerned, present or future. When parties do not reach a settlement and the matter is forwarded for arbitration or adjudication, then the award (An interim or final determination of any industrial dispute by any labour court or industrial tribunal) of the arbitrator or adjudicator is binding on all parties concerned. 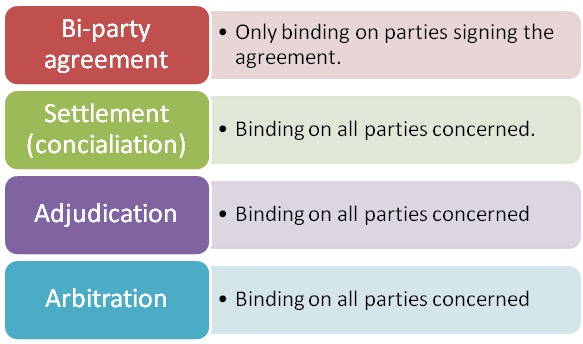 Figure:  Types of Settlements’ between Management and Union

Recognized unions enjoy not only the right to represent the members ‘ grievances but also in some cases are given special benefits by employers by way of office space and infrastructure, notice board, time off for union work as well as financial and other support for education, training and other welfare activities.

Trade unions are recognized by managements by using the following methods:

Membership Verification: An official of the labour department of the state or central government visits the establishment, obtains the manpower list from the management and asks each employee individually whether or not they wish to become members of a union and if so, which union. Based on the responses, the membership claim of all unions is verified to identify which union has the support of the majority of employees. This becomes the criteria for selecting the sole bargaining agent in an establishment. This exercise is carried out once in a few years.

Check-off: Under check-off employees are asked to state in writing whether or not they belong to a union and if they do, they to which union. Along with this, employees should also undertake in writing that they are willing to have union membership deducted from their salary. The check-off system helps management to know how many members each union has and who they are whereby enabling them to make an assessment of the relative strength of unions for the purpose of recognition and also, such information can be used to pressurize workers to stop patronizing unions which are not in the good books of the management.

Secret Ballot: A more democratic method, election by secret ballot, enables employees to exercise their option secretly, without fear or favour. The entire process takes place in the overall supervision of the Chief Labour Commissioner. There are two types of secret ballots:

In professionally managed organizations the management signs an agreement with the recognized union (decided using one of the above mentioned methods) which stipulates do’s and don’ts for management and union but all these are a not a binding on the management and the trade union.

The law in India does not make it mandatory for managements to have unions, to recognize them or to engage in any kind of collective bargaining. However, since the constitution of India guarantees freedom of association, managements cannot follow anti-union policies. Just as tax avoidance is legal, but tax evasion is illegal, union avoidance is legal, but union evasion is not.

This article has been authored by Harshpreet Singh from XIMB.