Small agricultural enterprises have been facing innumerable problems for many years. Many public policies have been suggested to try and alleviate them, but the root cause of most problems lies in the operational/managerial aspects.

According to World Bank, the primary factor which inhibits growth is the universal lack of good extension services. The inability of the farmers to access the markets leads to a chain of middlemen before the product finally reaches the customers. Hence there is a dire need to streamline the agricultural commodity supply chain. Also, Indian agriculture lacks in terms of awareness and reach of new technology leading to a reduction in the production efficiency.

The model proposed focuses on integrating the best practices of various supply chains in a coherent manner thus benefitting from the best of all elements. The model focuses on a centre in every village, say, Village Centre, which is a node connecting many different aspects of our model. It integrates the agriculture and allied industries with both internal and external trade and also with the logistics involved. The villagers would be the first set of consumers of the final produce and internal trade would be carried out amongst them. External trade, on the other hand would involve trading with different clusters, hubs and for exports as well.

Agriculture is where it all starts. The Village Centre closely works with villagers and assist them on the type of crop to be sown, farm cycles, soil compatibility, multiple yields etc. It also houses a seed bank which provides quality seeds to farmers. A large percentage of farmers today still rely on traditional methods of sowing/tilling/harvesting inspite of advanced farm equipments. Prohibitory price is a major reason for the same. Instead, Village Centre can purchase few sets of such farm equipments and provide them to the farmers on a round robin basis. These machineries complete their job on an average sized farm within few hours. They can then be used by other farmers. This would reduce the financial burden on the farmers and improve the farm efficiency at the same time.

The Village Centre can act as one stop solution for farmers. It can provide them real time price data, weather information and can act as a fertilizer house. In fact every such centre can have a small warehouse attached to it based on the feasibility. These centres can employ rural youth which would add more prosperity to the region.

Another major aspect of this model is the allied industries. Between sowing season and harvest season, the farmer can get involved in ancillary industries such as dairy farming, apiary, bio gas, poultry, wormiculture etc. Again, Village Centre would play a major role in integrating all these activities. Instead of having a separate supply chain for all, we can leverage each other’s supply chain. For companies involved in agri business, it is a boon since it does not have to work with every farmer but just with the Village Centre where every farmer is registered. It reduces a lot of overhead with respect to logistics within the village. Once harvesting is done, it acts as a distribution centre as well.

The produce can be procured by private enterprises involved in agri business or it can be forwarded to cluster centre for further processing. Now a set of villages can form a cluster and they all are connected to cluster centre, say the district headquarters. To begin with, this model can be implemented in those villages which are connected via pradhanmantri gram sadak yojana and slowly expanded to other villages as infrastructure improves. Thus the produce reaches the cluster centre where it is routed to different hubs. Now hubs can be viewed as major locations spread out across the country and strategically developed as centres of storage, processing and advancing.

As most of the district headquarters are well connected to state capitals or major cities around them, we can leverage existing rail network which can give a major boost to logistics. Every hub, then, stores the produce in its scientific warehouses, distributes as per the requirement or advances it to the hub in requirement of the produce. The produce can also be advanced to nearest port for export. A dedicated rail corridor for freight connecting ports to few major hubs can give a fillip to export of farm produce. 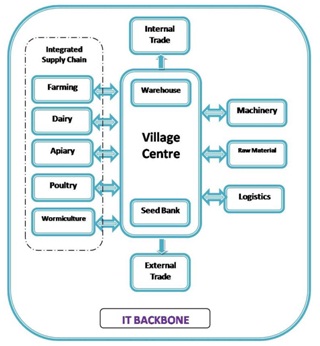 This gives a gist of the entire operating model. Now let us look into several factors which can act as pillars supporting this model:

In the present era, privatization of farming practices and operations also assumes great significance. The privatization as a joint effort of the agricultural company or specific industries such as seeds, fertilizers, biotechnology, farm equipments and agro chemical industry as well as food processing operating from Village Centre which are networked with the help of internet kiosk, will be revolutionary in the rural areas.

There will be a number of decisions which need to be taken into consideration. First, there are the operational decisions which include efficient production, inventory storage, distribution and transport.  Next are the tactical decisions, which involve deciding the acres to plant of each product, the choice of product to be planted, scheduling of pesticides, fertilizers, irrigation or choosing the mode of shipment from the farm to the market. And at last, strategic decisions. The goal of strategic planning is to reach at the most effective and efficient, highly profitable supply chain system that serves customers in a market. Businesses involved should also focus on assembling and deploying the key resources, i.e. human, technological and financial for succeeding in the rural agricultural economy.

Traditional companies need these resources to leverage on the opportunity provided by the internet. Assembling of resources from multiple sources, managing them, as a dynamic basis is the need of the hour. Given the rates of literacy, both general and the computer literacy, it is evident that internet-based information kiosk can play an effective role in future when backed by good helpline centres which can use the information critically as well as effectively.

A private agricultural operational setup will become a focal point and an active platform to promote rural marketing of various consumer products. It remains to be seen whether Indian agriculture understands the power of collaboration and put their act together.

Our agricultural supply chains will be networks that typically support four major flows:

Physical product flows, which are the physical products from input suppliers to farmers to the final customers, which reduces the chain of middlemen and allow direct access using an internet kiosk. In case the model is privatized, the produce would directly be sent to the enterprise at pre determined prices.

Financial flows, which involve the credit and lending terms, payment schedules and repayments, and insurance arrangements.

Technology flows, which include providing machines and the latest technology to the farmers allowing the farmers to generate extra income by engaging in ancillary activities.

Information flows, which coordinate the physical product and financial flows and provides the internet for networking and direct access to the markets.

This model also has some constraints attached:

There are no fool proof solutions. The need of the hour is to look out for an optimal solution and plug the loopholes.

This article has been authored by Srinidhi Rajshekhar & Amanpreet Kalra from IIFT Delhi.