E-Waste Management Into The Future

The sight of a puppy eyed, dilapidated robot, WALL-E doing its work of recycling the waste on Earth was very endearing and scary. The future of Planet Earth depending on a single robot while all the humans have evacuated the planet was a scary thought to comprehend not just by thousands of children across the world but also every adult who watched the movie, WALL-E.

WALL-E is probably the only movie which highlighted the issue of e-waste and the impact it would have on future generations. It presented a future where unbridled consumerism by humans would one day in fact end their civilization on Earth; this was an issue of waste management and electronic waste. 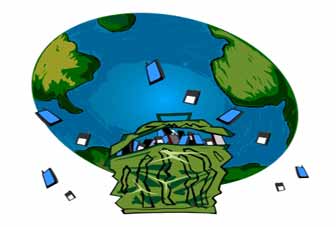 Electronic waste or e-waste refers to the electronic goods at the end of their ‘useful life’ after which they cannot be utilized in their current form. This waste is usually recycled or disposed of, it is the way in which this recycling and disposal is done is of concern. The electronic scrap from computers, televisions, mobile phones and refrigerators may contain contaminants such as lead, cadmium, beryllium and brominated flame retardants. During the disposal of such scrap there may be chances of leaching of heavy metals and contamination which may harm humans and the environment in the area around the landfills and incinerators. Developed countries like the USA and UK have several rules and regulations in place to monitor the recycling and disposal of such waste but the same initiative is lacking in developing countries.

Every year 20-50 million metric tonnes of e-waste is generated and this is expected to grow by 3-5% every year in developed countries and almost 10-15% in developing countries. Apart from their own e-waste recycling, countries like China, India have to cope with recycling of e-waste imported from developed countries. The people working in the recycling and disposal in these countries are exposed to the harmful contaminants as most of these centers are highly unregulated and many of them illegal.

In India, e-waste management is not yet a high concern policy matter though the e-waste (management and handling) Rules were formulated in May 2011. The rules were formulated by the Ministry of Environment and Forests (MoEF) under the Environment Protection Act. Widely known as the EPR or the Extended Producer Responsibility it put the onus of recycling and waste management on the producers of electronic goods. According to these rules, the producers would be required to –

The E-waste rules and the EPR while being a great policy on paper lacks implementation, some of the problems it’s facing are –

This article has been authored by Shilpa Kulkarni from T.A.Pai Management Institute.