Difference Between Personal And Interpersonal Skills

The difference between personal and interpersonal skills, both of which are of great importance in management, are discussed elaborately. A skill refers to an erudite ability to perform an activity in a given amount of time, energy or both. In short, it refers to the ability that one possesses. Personal and interpersonal skills are the two of many skills which form a predominant part in the life a human being. The human beings have evolved with unique abilities compared with other creatures in the world. They are capable of using tools, communicating, learning, analysing and synthesizing. Such abilities are termed as Personal Skills which are important for one to succeed in life. Without such skills, we, the human beings, would be as same as other creatures on this earth.

Communication and the ability to interact with others collectively form a sub-sector in personal skills and it is known as Interpersonal Skills. So, the interpersonal skill is a part of personal skill which is considered very vital in carrying out the duties in business or employment.

What are Personal Skills?

While applying for a job, the hard skills play an essential role in getting the interview whereas the soft skills help one get the job because the employers in every organization look for someone who is not only capable of performing his/her job function but also a good fit for the company in terms of personality who can make a good impression on clients. 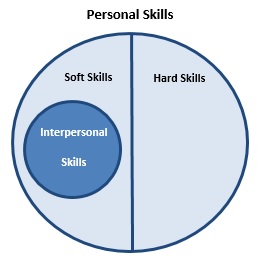 The intangible attributes of one’s personality are called soft skills. These skills are the character traits which decide how one interacts with others. They relate to a person’s Emotional Intelligence Quotient (EQ), attitude, habits, emotions, social manners, communication style and personality which aid him/her in interacting with others. Relationships are built using soft skills with friends, family, co-workers etc.

The skills which relate to a specific task or situation are called hard skills. These are easily quantifiable, more work or revenue oriented and mostly absorbed via education and experience. Subject proficiency, language proficiency, driving skills etc. are examples of hard skills. Such skills help in determining the employability and helping an employer assign tasks and responsibilities.

Both soft and hard skills work in tandem and complement each other which result in the creation of a unique personality of an individual.

Example: For a doctor, empathizing, active listening and understanding are the soft skills whereas a wide comprehension of illness, interpretation of symptoms and test results, and a deep understanding of physiology are the necessary hard skills.

What are Interpersonal Skills?

Interpersonal skills refer to the abilities of a person to communicate effectively and positively with others and hence, are considered under the soft skills category of personal skills.

This term is used widely in business context as the ability of an employee to get along with others while getting the task completed. An employee at work place with good interpersonal skills is likely to be more productive than his/her peers because of the propensity to reflect a positive attitude and look for solving the problems.

Although the interpersonal skill is considered as a significant ability to grow and survive, it alone does not make an individual complete i.e. other abilities are also required to make a person complete or whole and those are called Personal Skills.

This article has been authored by Khushboo Kansal from SIBM Pune