“Its that time of the year” said Dean, turning to his spouse.

“Expectation is a recipe for disaster” replied Sue.

“This time i am surely going to hit the nail on the head”.

Fastforward. Dean sits at his workstation looking haggard, dejection etched across his face. All confidence shattered, demotivated beyond the pit of self recognition. The seed of doubt planted, sprouting into a question against his own abilities and the option of resignation swirled in his head.

Performance appraisal right?! How many instances have we seen where this episode suffers an encore in different employees career? Measuring the performance of individuals is a crucial task for every organization, silently causing casualties in it’s wake. This method, carried out since the boom of industrial revolution is a need and a silent killer. So what is performance appraisal? Let us delve deeper into this phenomenon. 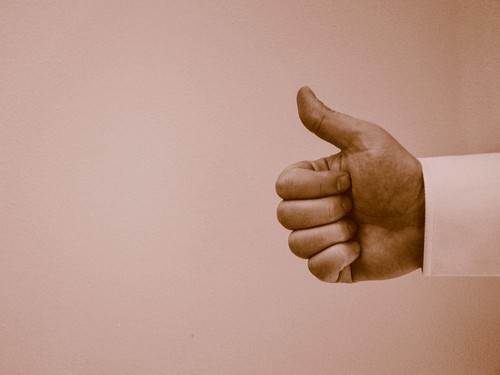 An objective assessment of an individual’s performance against well defined benchmarks to gauge the level of productivity the employee has brought to the table of organizational goal achievment. The process measures the relative performance of each individual in an organization and rewards or punishes them accordingly which is intricately entwined with job analysis, which forms the basis of this activity. To reward an employee with promotion, increase salary, identify his weaknesses and strengths and filling the competency gap are all but few of the outcomes of the performance appraisal methodology. 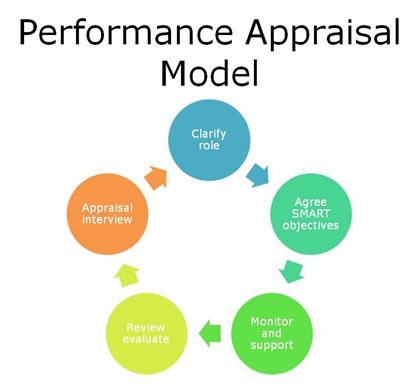 Depicting the flow of the entire process in a simple manner is illustrated in figure 1. A more comprehensive model will include zeroing in on the objectives of the appraisal process, establishing job expectations and designing the programme. The bell curve approach, or the Gaussian distribution, which has been used for some time to classify employees in categories to distinguish the low performers from the high performers is slowly losing its sheen. In recent times companies are taking the bold step to do away with the age old remnant, bringing in new methods and ways to appraise employees. The bell curve approach which is illustrated belowhas not been without its pros and cons. 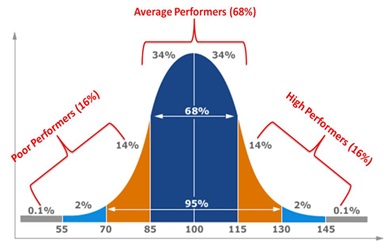 On the bright side, it helps in compartmentalization of employees in different levels of performance so that they can be appraised accordingly. Differentiating the high performers from the low performers will help identify the ones that need to be trained and developed and the ones who need to be retained, with an eye on pragmatic succession planning. The major drawback is that it is subjected to supervisor bias, as the immediate supervisor calls all the shots for the concerned employee and it is basically used just for the demarcation of salary and wages in the organization. Performance takes a step behind as it is not the criterion for excellence.

Moving forward, the bell curve is under fire. Performance appraisal cannot be done away with, at the same time it is a necessary evil if not implemented in the right direction. New methodologies are surfacing in the corporate world with global players of immense stature taking the lead to initiate change. Organizations are focusing more on employee satisfaction, competency and profitability, instead of just demarcation of performance as a formality. Let us see how deloitte reinvented the entire appraisal approach with the birth of the “performance snapshot”.

• Criteria : Neautralizing the idiosyncratic rater effect raters were encouraged to rate their own actions rather than those of the ratee. A general range of questions were prepared with a clear single concept of understanding. Pay, teamwork, poor performance and promotion criteria were used.

• The rater: Though the immediate supervisor or team leader is the one who has detailed knowledge about the ratee and by virtue of there roles must excercise subjective judgement.

• Frequency: The frequency of the snapshots will determine how accurate the information is spread across time. The higher the frequency, the more data we have to work with. Ina project structure, after each project a snapshot is carried out. Long term projects will have snapshots carried out quarterly. A delicate balance must be mantained, so that the team leaders are not overburdened with the snapshots which will defeat its very purpose.

• Transparency: To what level can transparency be mantained so that the process is not influenced by any means if the team leaders feel that the team members will see every data point, results may be sugar coated. Individual snapshot scores are aggregated into an annual composite.

With many organisations deliberating over whether to continue with performance reviews,in 2014 a survey conducted by the society for human resources(SHRM) looked at 391 US and multinational organisations and found that only 3% had completely eliminated reviews. Despite 72% of the respondents saying their firms conducted annual performance appraisals, only 2% of HR professionals believed their company deserved an A rating with regards to how well they managed performance.

“Imagine for a company of 330,000 people, changing the performance management process is huge.”- Pierre Nanterme, CEO of Accenture, told The Washington Post.

Inspite of the magnanimity of the endeavor, Accenture has moved forward in scrapping the annual performance reviews as they failed to achieve their primary purpose- to promote better staff performance. Instead the focus is on periodic reviews by the supervisor with continuous feedback. The primary reason for the move being they would like to evaluate employees based on their individual roles and performance. There is however, a flurry of different repurcussions on scrapping the review process.

A recent PwC study found that the move would culminate in:

• Reduced employee disengagement and less of a fixed mindset

• Fewer negative feelings from respondents about being judged

• Increased bias with managers creating their own rules

Do we see performance appraisal becoming more efficient in the foreseeable future? Do we see it being used in a better integrated way? Do we see more use of the archaic review system? These are some of the questions that we are faced with. Organizations are now taking matters into there own hands. Revamping or else scrapping the entire process and initiating a significant model as mentioned above with the likes of Deloitte and Accenture taking suit. The way forward should be identified for each organization before the system self destructs. To tackle the situation, the performance review process could be restructured to suit the needs of the employees and employers; a win-win.

Three tips to help employers construct a suitable process are iterated below:

• Forego annual reviews: The archaic annual reviews should be cast aside for a favourable real time review process, when the performance is fresh and can be detailed. The longer lapse in time from the event occuring to the review, the results become generic and broader. At GE, many managers and their direct reports use a performance tracking mobile app that allows employees to make text or audio notes , attach documents, upload handwritten notes. Continuous assessment is the way of the future, brining benefits to the employee and the organization leading to overall development.

• Old school rating systems should be old school: The traditional rating systems use scales that include either numerical or qualitative. Managers rating on these generic terms cannot clearly define the resultant feedback. A new multi rater system is used now to consider feedback, considering the input of managers, peers and clients. United Airlines uses a system that has decoupled compensation from performance ratings. At Deloitte, a five point rating from “strongly agree to strongly disagree” is used.

• Revamping the compensation deliverables: Set pay scales limit managers in granting bonuses and the apt compensation, hence making it difficult to nurture talent and retain it. Companies are coming up with creative compensation perks, offering things like biannual bonuses and peer to peer rewards. At costco wholesale, employees are eligible for bonus twice a year once they hit the top of their pay scale, making them the number two best company to work in Glassdoors 2014 top companies to work for compensation and benefits survey. Peer to peer bonus idea is particularly popular nowadays with the likes of Google and Zappos using it.

The way forward is shrouded in ambiguity if the performance review of old is continued. In the age of higher employee value added competitive advantage, performance reviews are of utmost importance in valuing and retaining talent. The need of the hour is to consider alternative strategies which are beneficial in the short and long run, removing the shackles of doubt that bind organizations to the archaic remains of the previous process. It is time to be ambitious, act, initiate, change, reorganise and pursue with dilligent fervor the methods of tomorrow.

This article has been authored by Joshua Mark David from XIMB