Old School Inc. had never had problems in acquiring talent. They were an old and reputed company who had enjoyed a good name in the employment market for umpteen years. Year on year, they went on offering similar facilities to employees and the candidates were happy with what was on the table. However, two years back the recruitment head got surprised when three of the five campuses they visited gave low to moderate responses to the recruitment drive. When this repeated the next year, he got discussing this with his colleagues at other places who reported of similar problems over the past few years not just from campuses but even from the market. He realized that it was a paradigm shift, a change in the concepts of Talent Acquisition from a ‘Buyer’s Market’ to a ‘Seller’s Market’. This year he goes to campuses again in a few months, but this time he wants to be prepared. 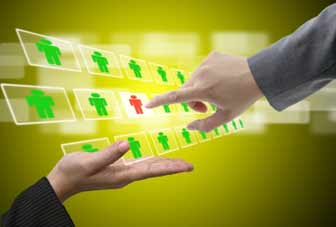 More and more firms each day are realizing that it is getting harder to source talent. Is the problem causing new trends to rise or are the new trends causing the problems for those who fail to keep up?-That is a different question for another discussion. Discussed below are a few of the talent acquisition trends visible in the market today.

The Social Media Recruitment Model at Microsoft is as follows: Pre induction engagement practices: Organizations like Godrej are growing wary of the criticality of the time period between the candidate getting an offer and the time of joining the company. This time; organizations believe can be capitalized to arrest the probability of offer declines. Companies have gone on to extend the scope of employee engagement principle to include pre-employment engagement. These attempts serve a dual purpose: they help build lasting relationships with prospective joiners and also help build the brand for prospective candidates. Godrej Properties Ltd. is a case in point. The company has been planning to get the selected candidates to be acquainted with the company culture through efforts like sending personalized hampers, containing books and music suiting the tastes of the candidates. These are complemented with lunch or dinner with senior management and the HR Forum.

Remote functioning :Cisco Retention helping in Talent Acquisition:More than a half of the population employed in the services sector are ‘information workers’ – the ones who hardly need anything more than a network connection and a phone to be well equipped for the job. The practice of remote functioning has its foundation in the philosophy that allowing top talent the luxury of working from wherever they prefer to improve retention and makes the job of talent acquisition a lot easier.

Cisco Systems has a high degree of reliance on collaboration technology to capitalize on the growing demand for remote functioning. This trend which was initially assumed to grow popular for only large organizations, finds application in organizations with varied scales of operation.

As Franklin D. Roosevelt said: “With power comes great responsibility”; the power we are exercising to change the old ways bring in new dangers. For example: with Social Media there is the possibility of forming biased judgements based on the plethora of personal information available; while trying to maintain diversity, we may abuse the process and end up segregating the workforce; and rehires may unduly enjoy or suffer from ‘Halo’ and ‘Horn’ effects respectively.

Tomorrow as it appears today

Clichéd as it may sound, but Talent acquisition has transformed from being an exercise to an experience for the candidate. The candidate maybe selected or not, but he should not go back thinking that he did not get a fair chance, that the process was based on the whims or fancies of someone-he should go back as a delighted customer. Ergo, the new trends should be about improving the candidate experience: Recruitment has transcended beyond the boundaries of a function to an experience. Job sites have given way to career networks.

This article has been authored by Ronald Browne & Sushmita Barua from SIBM Pune.