“Turned on” people figure out how to beat the competition,“Turned off” people only complain about being beaten by the competition” the phrase rightly pointed out by the famous author Ben Simonton capsulates the precise nature of the human capital of an organization. In the past decade organizations have faced a severe crunch of human capital coupled with the ever changing turbulent economy. 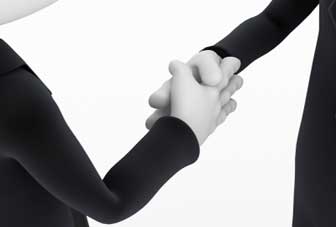 The other consequence is the decline of overall engagement level of employees illustrated below. The engagement levels of 2010 were 56% as compared to that of 2009 which was 60%. The graph embodies that apart from Latin American region every other region (North America, Asia Pacific and Europe) has seen a considerable dip in the way employees feel one with the organization. It has been further estimated that in 2010 the weakening engagement levels have been the sharpest. Clearly the employee- organization relationship has been strained due to lack of harmonious relations between employees and leaders/ managers, lack career development opportunities, challenging work environment, organization’s reputation and so on. 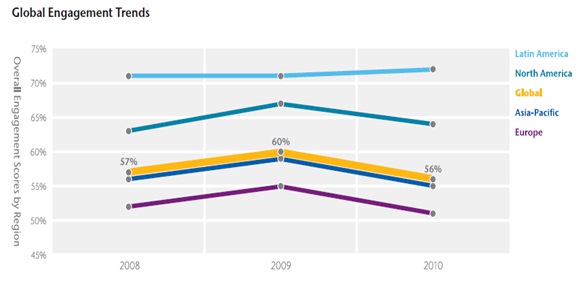 The focus of the article is to analyze the instrumentality of leadership in the employee engagement scenario. The study aims to put into perspective a typical characteristic of a successful leader that deals with the interplay of emotions and their management that is Emotional Intelligence. The article also dives into how an emotionally intelligent leader drives higher engagement of his followers and thereby organizational performance. Hence it intends to elucidate how such leaders can plan and implement better employee engagement strategies.

Leadership Makes a Difference: A Look at Statistics Worldwide 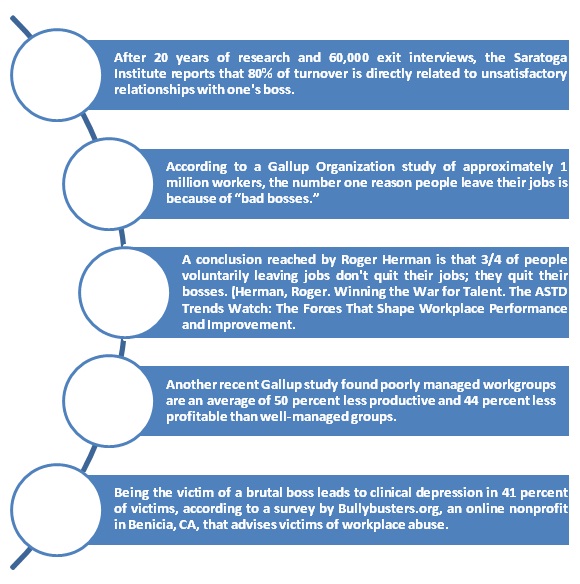 The above facts exemplify that out of different factors empathetic leadership has been a highly valued variable which determines the level of engagement. It would be worthwhile to ponder over the relationship between the two in detail.

The concept of Employee engagement has generated interest both in the academic field and the corporate. Macey.et.al (2009) argued that rarely has a term resonated as strongly with business executives as Employee engagement. Harter et al. (2002) defined employee engagement as an ‘‘individual’s involvement and satisfaction with as well as enthusiasm for work’’ (p. 269). Kahn (1992) defined engagement as ‘‘the harnessing of organization members’ selves to their work roles.’’ Hence engaged employees are defined as those who endorse their organization as an excellent place to work and by their will perform beyond the expected level; remain loyal even in adverse times. 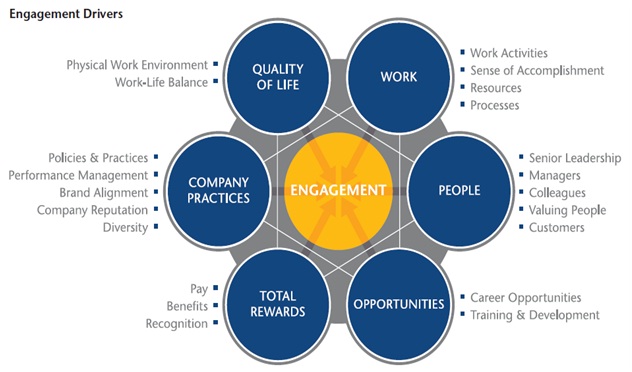 According to the employee engagement model by Aon Hewittthere are 6 drivers that lead to engaged employees in an organization namely: Quality of life, Work, People, Opportunities, Total Rewards, Company Practices. Apart from the people (Leadership, Managers, Colleagues, Valuing People, and Customers) dimension the rest are the ones resulting/ originating through the people. Hence the people factor can be stated as the most crucial element driving the rest of the elements. It is here that the need for leaders and managers to be emotionally intelligent arises.

Ever since the publication of Goleman’s (1998) book on Emotional Intelligence it has become the hottest buzzword all over the world. EQ involves being able to handle emotions smartly.Salovey and Mayer(1990) said that it is a form of social intelligence that involves the ability to monitor one’s own feelings and to discriminate among them and use this information to guide their own thinking and action. Daniel Goleman further added that IQ by itself is not a very good predictor of job performance. 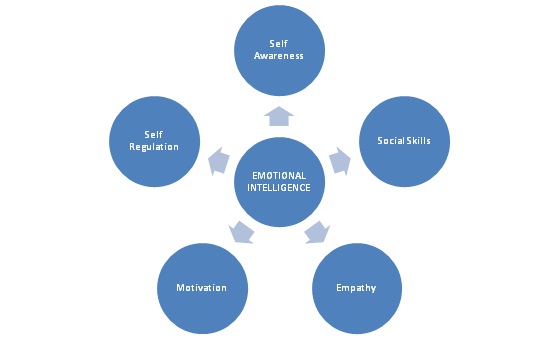 The framework above has been given by Daniel Goleman which describes Emotional Intelligence through Self- Awareness, Self-Regulation, Motivation, Empathy and Social Awareness.

Hence it is obvious that to enhance performance of the organization it is instrumental to build up a strong leadership base characterized by leaders having high Emotional Intelligence coupled with highly motivated and engaged employees. If one tries to read between the lines one would understand that second factor is a consequence of the first. On similar lines Duran et al. (2010) observed that the impact of EI within employees as a personal resource enables employee engagement amongst themselves. Sivanathan and Fekken (2002) also discovered that Emotionally Intelligent employees and leaders are a part of transformational leader member exchange. Harter et al. (2009) found out that high performing organizations whose earnings were 3.9 times per share as compared to their counterparts were majorly engaged organisations. Palmer and Gignac, (2012) argued thatEI of managers substantially correlated with direct report ratings of employee engagement. The researches point out one thing in common that the employee engagement level could be increased if the overall EI of the management/ leaders was increased.The Global Engagement report (2011) generated by Blessingwhite Inc found out that managers who struggled majorly with their leadership behaviors had their followers engaged less. Similarly the Aon Hewitt Survey of Global Employee engagement (2011) discovered that along with career opportunities, among the top five global engagement drivers for 2010 was recognition by the leader. Almost 40% of the global workforce said that their leader/ manager behaviour affects their engagement level with the organization. Hence one needs to take a look at how and what kind of behaviour characterizes a leader of the people, by the people and for the people.

Leaders with high EI are individuals who have a high level of self-awareness, empathy; effectively regulate and manage their own emotions and so they are a role model and can positively influence the feelings of others (Gignac, 2010a, b). More than being a superior they are partners who also act as a coach, mentor and guide.

Towers Perrin Global Workforce Study (2010) revealed that employers can make a huge difference in creating a more engaged workforce — if they focus on the right things. The most important factor listed on the listed of the right things was to have an effective leadership in the organization. Among the overall engagement drivers for workplace globally across generations it is overwhelming to note that from the age group of 35 onwards majority of employees value relations with senior managers above  factors like organization’s reputation, career development and so on.The following diagramillustrates the gap between the existing characteristics of leaders and the characteristics of an Engaging Leader. Here Emotional Intelligence lies at the top of the hierarchy of desired characteristics followed by Communication skills, Coaching, Ability to inspire, authenticity and humility. 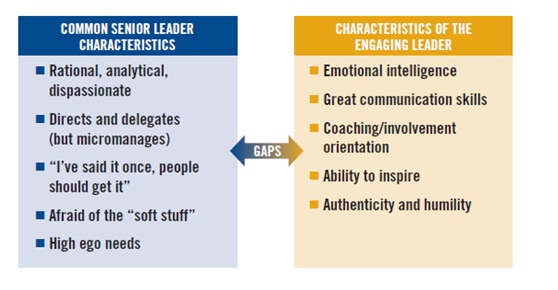 From the above stated facts the significance of a sound and effective leadership cannot be negated. There is a direct link between the level of emotional intelligence of a leader and the level to which are employees are engaged.Organizations which aim to increase the engagement level of employees should first scrutinize the leadership that exists.

The following pointers are   steps that can organization can take. First and foremost is to hire and promote those individuals to the higher levels who are not only highly skilled but also possess high EQ. Secondly managers’ EI can be augmented by exposing them to training and development. Research has proved that the emotionally intelligent workplace behavior of individuals can be enhanced to the tune of 10- 20 % approximately. Hence EI Enhancement Strategy is one of the reliable ways to improve the overall engagement levels across the organization. This training will be successful only if employees have the discipline to follow religiously what they have learnt.Some organizations endeavor to escalate engagement by buyingit. They offer increased compensation and benefits, share options, child care facilities etc. These things can proliferate engagement to some degree, but it is the relationship the employee has with their immediate manager that matters the most.Best Employers not only provide a road map, but also have shown that these strategies work in both good times and difficult times. Employers can set themselves up for continued success by focusing on the key Engagement Drivers that make a positive impact on their workforce and thus keep their employees engaged. The companies that have a highly engaged workforce have risen to the challenge. They proactively respond to the environment, competition, and changing workforce needs. They evolve, but stay true to the values that made them successful and are well positioned for continued success.

This article has been authored by Shashank Malhotra from IIFT Delhi.