Why Performance Management is so difficult?

Let’s face it. Managing people is no easy task. Ever since the early 1900s when Fredrick Taylor published The Principles of Scientific Management, a seminal monograph aimed at improving the efficiency of shop floor engineers, managers have been inventing and reinventing new management systems to get the most of out of their employees. While some of these systems do work as intended, nearly 70 percent of performance management initiatives fall flat on their face (McCunn, 1998) 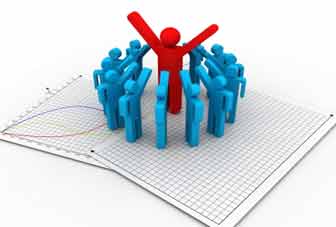 This raises some interesting questions. Why do so many performance management initiates fail? Why do organizations have to choose between the carrot and stick approach in order to goad their employees to perform? And most importantly, are there any other approaches that work better?

To answer these questions lets analyse the way HR managers go about performance management. The basic assumption underlying most systems is that people need to be externally driven in order to perform at their job. The stick provides the necessary push while the carrot is a tempting pull. However, not all tasks are accomplished though this system. Consider a Wikipedia contributor working hard behind the scenes to make sure the site is constantly updated and edited. He needs neither a carrot nor a stick in order to perform his role simply because he finds the job inherently interesting. Likewise, most of the tasks you and I perform daily outside of the office environment are inherently interesting. Gardening, listening to music, collecting stamps and so many other hobbies: they neither provide us with any monetary rewards nor is there any punishment for not performing them. Worse, research shows that, had there been an external reward for carrying on with these hobbies, we would be less inclined to take them up. (Deci, 1971) Yet we can spend hours and perhaps even days engaged in these tasks. So what makes them so inherently interesting?

Bestselling author and journalist Daniel Pink proposed a model for describing how intrinsic motivation works. According to Pink, people will find a task inherently interesting if they are given sufficient control over how to perform the task (Autonomy), if they have an opportunity to get better at the task (Mastery) and if they are able to link to task to a greater overall objective (Purpose). 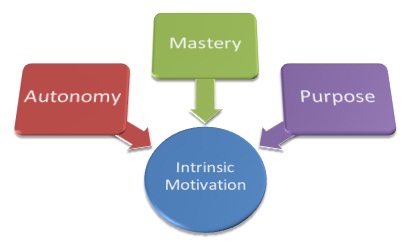 I suggest that the reason so many performance initiatives fail is not because of incorrect metrics or improper implementation, but simply because they are based on an assumption that everyone in an organization needs to be extrinsically driven in order to perform. Employees are not expected to enjoy their work. In fact it’s assumed to be boring and they have to sacrifice their time and effort in order to do their job. Is it any surprise we label the monetary rewards as “compensation” to make up for the “losses” incurred?

I propose a system of managing performance that is based on intrinsic motivation rather than extrinsic. In order for this system to work, HR managers need to do three things. Firstly, the roles in an organization need to be designed in order to accommodate sufficient autonomy at all levels. Secondly, the approach to rewards needs to be redefined. And finally, hiring efforts should be focussed on getting the right people onboard.

The crux of redesigning roles in any organization to make them intrinsically interesting is to allow sufficient autonomy at each level. This involves driving decision making down to the grassroots level. Ricardo Semler, CEO of Semco SA, famously took this idea and ran with it. He eliminated all job descriptions from the organization instead allowing every single employee to design their own job descriptions. This allowed them to take up as much or as little responsibility as they each saw fit. At Semco SA, each employee is his/her own supervisor. The traditional pyramid hierarchy has been ditched in favour of a circular hierarchy with only three levels where there is absolutely autonomy at every level as there is no one to report to. (Semlar, 1993) Does this approach work? You be the judge. In the wake of the redesigning and restructuring effort, Semco SA grew at an astounding annual rate from $4million in 1982 to $212million in 1993.

Once roles have been redefined the tricky aspect of rewards needs to be dealt with. The trick is to get money off the table. If the reward is the focus, the motivation shifts from intrinsic to extrinsic and, as mentioned earlier, can lead to demotivation. The HR manager needs to ensure there is internal and external equity in pay. This goes without saying as a fair amount of work needs to be fairly rewarded. Next, the base pay needs to be set higher than market average. This has been proven to result in reduction in costs over a longer run as companies which pay higher are able to attract better talent, reduce attrition and boost productivity (Akerlof, Yellen, 1986). Finally performance metrics which are linked to rewards should be modest and linked both to individual and organization performance. This reduces the likelihood of employees trying to ‘game’ the system. Modest rewards in addition to higher than average base pay will shift the focus from performance-linked pay back to the performance itself.

After the roles and rewards are in place, it is the duty of the HR manager to ensure that the right talent is fed into the pipeline. Not everyone can work well in an unsupervised environment. Some employees need explicit direction from above in order to perform their job well. The aim is to get those people onboard who are self motivated, able to set goals for themselves and able to work in an unstructured, autonomous environment. These are the people who do not need to have someone looking over their shoulder, managing their performance. They are able to set stretch goals for themselves and meet them time and again.

In conclusion, we as HR managers need to reassess the way we approach managing performance in our organizations. If we understand that work need not be drudgery and are able to redesign roles, redefine rewards and hire right, performance management is no longer as difficult as it once seemed.

This article has bee authored by Royston Vaz from SCMHRD.