-Lord Krishna to Arjuna in the Bhagvat Gita

The essence of Mahabharata is not in dharma or war but in time. The Hindu literature classifies Mahabharata as Itihasa, not history but account of life ‘as it was, is and always will be’. From this timeless tale one can account for everything in the world today like some of these management principles. 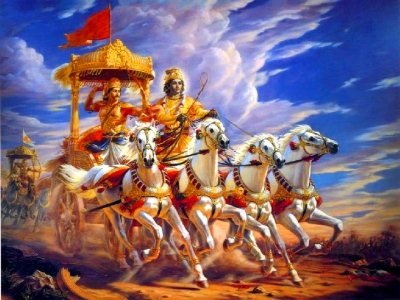 1. Work on your weakness, improve your skills and constantly learn:

During exile the Pandavas, having recently lost their kingdom and honour, utilized their time to acquire new skills. Arjuna, the most skilful archer in the world set out to acquire new weapons. Yudhisthira acquired teachings from various wise rishis and learnt the game of dice, his nemesis, and became undefeatable in the game. It was these newfound skills that gave them an edge in the final war.

In the modern times the principles of management/technology learnt today will be archaic in the future. Thus we have the need to constantly improve, especially in times when career is at ebb.

The Kauravas had a centralised leadership with one head of the army at a time who had the control of the entire 11 divisions (akshouhini). Bhisma, Drona, Karna, Shalya and Aswathamma pass the command as they fall and for a brief period the army is leaderless. Despite the commanders Duryodhana is in de facto control. This dichotomy in leadership often results in clashes.

The Pandavas on the other hand have a modern management structure to their army. Arjuna was the chief commander of the army, with Lord Krishna as his counsellor. Dhristadymna was the commander-in-chief and also commander of one of the seven divisions (akshouhini), as six others were for their.

The sharing of responsibility, thus power leads to a democracy in the management and reduced reliance on one individual, thus reducing risk.

The Kauravas had number advantage (11 divison Vs. 7 of Pandava) their generals fought their individual battles:

They were a group of brilliant individuals which made a terrible team. Often described as bees, hornets and mosquitos put in a jar with clash of egos (Bhisma-Karna, Bhisma-Shakuni, Karna-Shalya)

On the other had the Pandavas fought with one goal, setting aside personal beliefs like Yudhisthira lying to Drona or Arjuna killing Karna. Again all of them were a part of decision making process.

Teamwork succeeds where individual fails, but the team formed must have the same vision, goal and passoion.

The Panadavas used trickery of some sort of the other to overpower the Kaurava commanders: Bhisma, Drona and Karna shows that the Kauravas had highly competent people with them. It was the difference in the commitment of the people on both sides that made the difference.

On the other hand the Pandava army showed extraordinary commitment:

When selecting a team it is always better to have people who are passionate and committed rather than people who excel individually. The best man for the job is not the one with the best skills but with the greatest commitment.

In the beginning of the war Yudhistira went to ask for the blessings of the elders, who invariably revealed the secret of their defeat. This was a master plan executed finely for levelled up the moral or the dharma cause which bound together his army.

He took the calculated risk and offered all the people to change sides if they wanted to. In reality he was exploiting the lack of cohesiveness of the enemy but it may have backfired. The competence of the warriors and the strength of the divisions were skewed towards the Kauravas which could have precipitated defection from his side. Though it played in his favour when Yuyutsu crossed over to the Panadav side.

Any venture in the real world comes with associated risk with it and all the decisions require us to take decisions after evaluation of these risks. Pandavas and Kauravas both took risks but while Duryodhana’s decisions were whimsical and egoist, the Pandavas took calculated risks which mostly paid off. But again the various decision making of the two armies teach us one thing: there are no perfect plans.

Mahabharata, and by extenuation Hinduism, is probably the oldest and the only to recognize the importance of women in all realms of the societal working. Some suggest that woman is indicative of the world we surround and man of the people in it and that when Draupadi is dishornoured it suggests the exploitation of the world by its inhabitants.

In the epic the Kauravas had a total patriarchal structure, with commanders like Bhisma, a celibate who could not consider a woman’s perspective.

Pandavas relied on the involvement of women and their thoughts. Kunti, their mother was the supreme authority, and her word was dharma for Yudhistira. Draupadi was a companion to the Pandavas, and had it not been for her motivation the Pandavas would have reclined to the forest forever.

In any decision making structure women always bring in a holistic view of the situation. The aggressive and dominative masculine traits are balanced by harmonic and sustainable traits of a woman. It is only in a team that is able to have this balance that is able to sustain in the long term.

7. Lord Krishna: the best crisis manager of the world

A discussion of any aspect of Mahabharata is incomplete without the mention of Lord Krishna. His divinity scintillates throughout the tale and Panadavas would have had a hard time winning but for him. For a moment let us set aside his divinity and view him in the scope of a manager.

Stages: Extending the discussion the avatars of Vishu, (who is a householder worldly God) defines the stages of a manger in an industry:

The managing principle of Lord Krishna are complex, especially since at times they seem to be full of trickery, deceit and in conflict of Dharma. He used all methods of negotiations to avoid a conflict but on battlefield it is winning that matters. On pondering you discover that no one but Lord Krishna knows his exact purpose on the battlefield. Duryodhana is fighting for the letter of the law and Pandavas on the spirit of the law. Krnsa is there to uphold principles.

His actions teaches us something very important, recognize the larger purpose. Is it to surpass the rival? No, he says. Take into account the larger view to mirror your actions. Do not be myopic to the future needs for present wants. He is the first preceptor of sustainability.

Then again is his coolness in the midst of battle, probably because he is not involved in conflict. A question arises in my mind that He being God could have stepped in and stopped the massacre to punish the wrongdoers. Is he justified in his decision of not taking up arms? And it turns out that he is. Not engaged in battle himself he is able have a different view of the situation and can offer ingenious alternates. The leader who monitors thus comes up with solutions that escape the team on real time work.

Each of his actions when views from different views yields a new perspective. Everytime I read the epic his genius as a manager dawns upon me whose understanding and implementation is a life long journey.

The timelessness of Mahabharata and the management derived is a subject of immense research. Timeless and holistic, thus complex as the text is, it truly offers a direction towards solution of all problems.

A very subtle teaching of the epic is sustainability. The Goddess earth (Draupadi), comes as a cow to Vishnu to complain of her over exploitation, and God as a cowherd wipes out a generation of these people, (the princes dishonouring Draupadi). He promises to return again to establish order, unless we become sustainable.