What shall be the Future of Industrial Relations in India?

This is the dilemma being faced by nearly everybody in the industry today. To understand the importance of above topic, we would like to begin by talking about the 50 day long worker’s agitation at the Bajaj Chakan plant, 2013. 950 workers of Bajaj Chakan plan went on strike, on 25-06-2013, in response to management’s refusal to accept their demands. Though the management did not yield in to the demands of the workers, but the most striking feature of the strike was the ‘Charter of Demands’ raised by the union. The Union had bargained for 500 shares for Re.1 for each worker , in its COD .The reasoning given by Mr. Dilip Pawar was that if the company could give 450% dividend to its shareholders, why can it not pay the same amount of rewards to its own workers? This demand would have been considered unimaginable in the past Industrial Relations Scenario but has become a reality now. Mr. Pawar suggests, “It’s always the investors who benefits from our hard work, so we decided that we also want to be investors” .The above scenario typifies our ‘new worker’, who has high aspirations and is also a lot more educated than his forerunners. 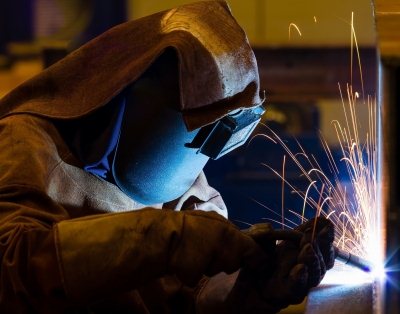 As can be seen in the figure 1, the numbers of strikes and lockouts have drastically reduced in India. There has been a progressive reduction in the cases of Industrial disputes, number of man-days lost (on account of strikes and lockouts) in India especially in the past two decades. Gone are the days of ‘Institutional Industrial Relations’ where violence (Ravindranath) due to political as well as the ideological rivalries dominated the industrial scene . The late 80’s and early 90’s industrial scenario was dictated by militant trade Unionism, with Datta Samant as its figurehead. Over the years, we have seen a greater democratization of work place in the form of increased prominence of ‘Collective Bargaining' which is also now loosing it’s sheen in the current scenario as discussed in the subsequent sections. 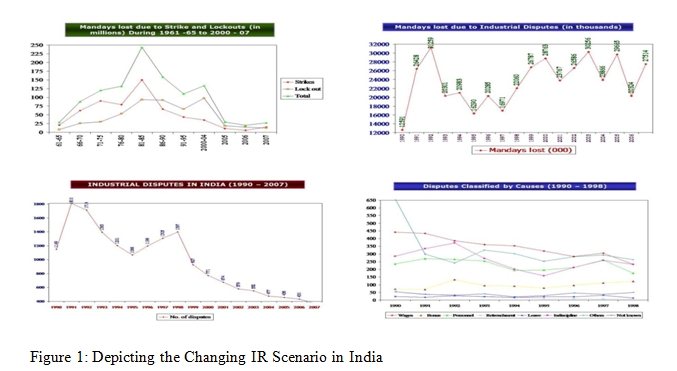 2. Changing Demographics of Workforce in India

ITC’s Ranjargaon factory plant manager suggests that the average age of the workers working in their facility in Pune is 26 years. The oldest worker in the factory is 30 years. This has been the trend in most of the newly set up plants in the country. This has also been amply demonstrated by the studies in the past which clearly indicates that over a period of next 10-15 years we would have a relatively young population (18-35 years) as part of our workforce (Chandrashekhar, Ghosh and Roychowdhury, 2006). The employees in this workforce are referred to as the Gen-Y employees.

Following are the basic characteristic which typifies a Gen-Y person, and have been a major factor in changing the workplace dynamics.

“Two decades ago the retirement goal of a worker in India used to be, to become a supervisor. Today he wants to become a manager before he retires” which’s an 80% jump in pay if nothing else says Sunil Ranjhan, VP HR, Hyundai Motors. Thus, they are very ambitious and have keen interest in being well aware of their surroundings.

“Gen-Y’ers are more self-confident than their previous generations- also called as latch-key generation” (Martin, 2005). Though, Gen-Y may be considered to be individualistic, but they also demonstrate a desire for being collaborative. Gen-Y demands clear instructions and directions from management but they also want flexibility and freedom to do their tasks.

Moreover, Gen-Y workers are more technology savvy, enjoy being given responsibility and as a result are more productive at their work. They also have the ability to effectively communicate (Chesworth, 2013) and articulate their ideas and thoughts.

All the above factors of changing demographics and change in the age composition in the work-force is leading to diminishing segregation of workers such as white collar and blue collar.

Another example to substantiate the above conclusion- The workers at the industrial establishments of Tata Motors’s Jaguar-Land Rover assembly unit in Pune, wear jeans and t-shirts on Fridays, following the dress code of business casuals mandated for the white-collar employees . This was allowed very recently, only after the workers demanded equality of rights from the management.

“With the advent and proliferation of social media, the disconnect between the dressing, way of life and the language of the managers and workers is becoming immaterial”- Bino Paul , Chaiperson CHRMLR, TISS . Interactions with the member of Trade Union, ITC Ranjgaon plant, revealed that nearly all young workmen now have access to smart phones, majority of them are also on Facebook. He also suggested that there are some training activities organized by union for its workers to learn about the global practices and policies at work. As a result, he recalls a senior worker (who connects with his Japanese and European counterparts over facebook) in the plant complaining “if we can use global machinery, adopt their production methodologies, why can’t we get the same level of facilities and recognition in our factories”. Social media has thus been a major contributing factor to this awareness among workers.

Decline in the tenets of Collective Labor Power:One of the key issues of the strike at the Maruti Manesar plant was of recognition of new union there . The workers felt that they needed an independent body to represent their demands. “Independent unions (like the Manesar one) however mean that collective labor power is definitely on the decline” suggests Bino Paul, TISS . Dilip Pawar says that workers today even question the Union leaders. “Twenty years ago, if the leaders said do this, it got done, no questions asked. “It’s not the same case today, they expect a logical explanation”.

The decline in collective labor power can also be observed from the sharp reduction in Average Trade union membership from 2008 onwards (Figure 2).

As a result of all the above factors, there has been a dramatic change in the supervisor-worker dynamics, since the young workers demand an explanation for doing any work which is outside the purview of the employment norms. The supervisor’s still being driven by the old school of thought (IR) react by showing their authority. There might also be another source of conflict between the worker and the supervisor. The supervisor-subordinate relationships are greatly affected by the age composition of the workplace and the relational age difference between the two (Perry, Kulik and Zhou, 1999).

In the earlier scenarios, people generally had bosses/supervisors of much older age, and the workers used to have a sense of veneration for the superior which could be attributed to the patriarchal nature of our Indian society (Zandi, Mirle and Jarvis, 1990). This situation is increasingly changing at workplace now. We have many situations, where worker and supervisor are of similar ages and that veneration disappears once you’re of the same age as your boss. The boss has to demonstrate now that he knows more. From an approach of veneration it has now transformed to an approach which says, prove me why should I listen to you?

Workers are prepared to deal with managers for their daily demands rather than routing it through the union. They are also ready to reach out to the very top management to get their demands fulfilled. HR manager of a reputed auto manufacturing firm states “factory workers approached the associate vice-president asking for access to the pantry, which was reserved for managers”. This sounds like the end of the traditional labor union, because the capability of the workers to adequately communicate problems and confront the management without the involvement of trade unions goes against the ethos of ‘Collective Bargaining’.

These changes have also been appreciated by the management as is echoed in the views of Rajiv Bajaj as- “The more educated a [worker’s] mind, the easier is to reason on a logical basis”.

As a result we are seeing a huge paradigm shift, in the industrial workplace situations in day to day life. Thus, we also need to brace up for the change and move towards an approach which helps to maintain the workplace harmony and sanctity of the worker-management relationship. Therefore, we are seeing an increasing shift towards the approach of ‘Employee Relations’.