In what ways can the organisational reality described by Farjoun (2001) be informed by an understanding of open systems thinking described by Katz and Kahn (1978)? Also how the ten characteristics articulated by Karz and Kahn (1978) could be understood by management in the quest for long term performance.

What is an organisation? What are its constituents? In its most basic form an organisation consists of a group of people working together towards some common objectives. These objectives define company goals. Primary question that arises is “What is the need of an organisation”? Why do they exist? Reasons are simple enough. An individual’s capability is limited in nature. An organisation is that kind of a platform which provides individuals to club in their capabilities and tries to achieve something which is beyond the capabilities of a single individual but as a team possible.

Now there have been various theories that tried to explain the behaviour of the organisations by trying to model the various characteristics that describe an organization. The dominant school of thought among all is the open system theory (Karz and Kahn, 1978). Before this theory came into existence, all the theories regarding organisational behaviour considered organisations as closed entity, cut off from the world. In reality many environmental factors do play a significant role in shaping the way organisations work and hence came in the open systems theory.

The overall general atmosphere surrounding any organisation consists of four basic factors. The first view is cultural. Cultural view gives the vision about the good and bad and the important and trivial. In a country like United States, views are heavily based on the principles of individualism, freedom and individual rights. Whereas in country like say Japan, the views are more towards community rights and working in groups.

The second category of factors coming under Open Systems Theory is Economic Conditions. Here the condition of the economy like Recession, Boom, Globalization etc do play an important part. These factors also do play a significant role in an organisation. So for example in growing economy, an organisation may not only grow but also may become more specialized.

Third factor coming in picture is Political Environment of the country, which functions to effectively distribute power within the society and enforce laws. The long term security and stability of an organisation is heavily dependent on the political stability and favourable economic policies supported by the governments.

Educational qualification is the fourth aspect that is critical for any organisation. Essential man power, skilled workforce is central to survival of any organisation. For example, organisations that are in geographies where there is abundance of skilled manpower will certainly have a better chance to survival.

“Open systems” theory is based on the notion that all organisations are unique in themselves and hence should be structured uniquely to suit their particular needs. Research conducted in 1960’s showed that those organisations generally fail which follow traditional way of functioning. Also critical aspect is regional cultural influences in motivating employees.

Environmental factors can be classified under two heads i.e. Specific and General. Network of suppliers, distributors, agencies both government and otherwise and of course competitors comprise what is all specific to a particular organisation. An organisation is just one of the entities of the whole system, to survive and succeed in the system (Farjoun, 2002) it has to interact with other elements of the organisation.

a) passionate and energetic inputs to the organisation

b) the process of transforming these inputs within the organisation

c) outputs in tune with the energy levels of the inputs; and

Dynamic inputs include employees of the organisation; raw materials utilized by the organisation and of course capital. Over and top of it are intangible factors such as position, importance, satisfaction (Thompson, 2001) and other personal recognition in terms of rewards etc. The quality of inputs involved is very vital, as the quality of the output generated have a direct linkage with the kind of input supplied. Intangible assets like brand names etc also go a long way in the ultimate success of the organisation.

The input energies are used in the transformation phase in what results in products or services. The transformation phase is where the real working of the organisation comes into the picture. How effectively organisations transform the inputs into outputs will eventually define the quality of outputs produced. Outputs can be both service and product. That is what we meant here by the term outputs. As was the case with inputs, the outputs should also be energetic enough. No buyer is there for some product/service which is not of the highest quality at that price.  Reforming or recycling refers to the fact that output is recycled back to the organisation either directly or indirectly. Consider the case for example of paper industry; in this case paper is the finished product. 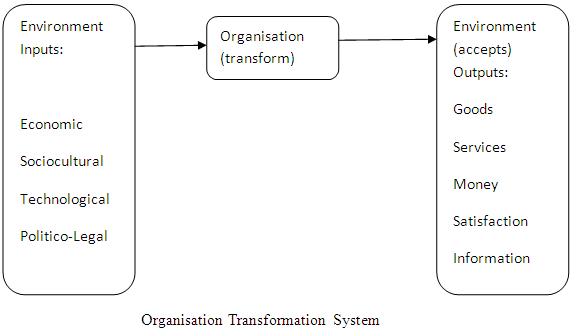 Over and above these said four factors Katz and Kahn (Katz, 1978) identified several other organisational properties that are in line with open systems theory. These factors have their own implications on the design of an effective organisation. Just an example can be that they identified law of entropy applies to even an organisation also, the repercussions of which implies that all organisations move towards a state of disorganisation and eventually death. Having said that, an open system can constantly gain energy from its input environment it thrives in. To give a practical application of this theory is the case where a falling organisation appoints a new CEO and the company survives the death phase and rebounds.

Understanding of the linkages between organisational performance and open systems thinking

Organisations of today have to fiercely compete with the competitors for virtually everything including manpower, resources and even innovation. Organisations do develop characteristics that help them cope up better with their threats and constraints. But between input and outputs associated with an organisation, there are through puts. The goal of this throughput is to align people to achieve common goals. A student of open systems approach will thus be interested in examining an organisation from the following heads:

•  the subsystems as well as the overall structure of the organisation.

•  the match of each subsystem with the others.

•  aligning the diverse subsystems together under one goal

What it may end up in:

Conflict resolution and more roads to communication is where the “Engineering” side of the systems theory comes in contact with the human aspect. After all, it’s ultimately the human resource of the company that has to live with the changes induced by the theory.

5. Use of Open System Concept to achieve Quality

•  How to achieve the preferred state of existence? What all factors contribute towards it?

Open Systems theory is basically modelling the key variables, both internal and external to the organisation. We believe one of the most breakthrough approaches in organisational behaviour is Open Systems Theory. Now a pile of sand is not a system. A pile of sand will still be called the same even if e removes some of the sand particles from it. Organisations are not like that, they work in close sync with the subsystems that they are constituted of. On the flip side of the Open Systems, there is a criticism that there exists a tendency to think by analogy. Now this can create errors of misconceptions and understanding of the situation. Sometimes it also becomes too abstract, just trying to put in new vocabulary.

Having said that, no doubt open systems theory will help in quickly understanding of the variables involved in the organisation. By regularly reviewing the initial efforts put into the model, and also constant revision of it as and when required will certainly help in organisations becoming better and successful.