We all fondly hum the song “We don’t need no education” by Pink Floyd, In reality the time has come to acknowledge the power of young. The new generation of children has evolved from being the pester power to key decision support system of the families. It is very difficult for market players to ignore a segment that constitutes 31.1% of the population in India. This segment of ‘Children’ is now emerging as a major demand driver for many market players.

With an increase in the number of nuclear families & double-income children families, there is a growing willingness & an increasing ability to pay to fulfil the demands of children. They have high disposable income and hold a desire to vicariously enjoy the kinds of toys, games and apparel; they never had access to and a competitive desire to see their child shine.

With the increasing purchase power of the kids, they have become more knowledgeable and critical. Kids are now extremely aware about the features of the product they are trying to buy, hence kidfulence is a growing phenomenon.

Many brands try to catch the attention of children. Psychological Studies reveal that brand loyalty is developed at the young age of 2years. And hence many brands are now increasingly targeting children as consumers. It is well known that McDonalds, long ago, strategically marketed to the kids as its target consumers. Right from introducing ‘Ronald’ to ‘happy meals’ to toys of the latest cartoon series, etc. McDonalds has been extremely successful in its marketing strategy. In advertisements it targets the youth & the children.

Kids represent an important demographic to marketers because they have their own purchasing power, they influence their parents' buying decisions and they're the adult consumers of the future. They have tremendous exposure through television viewing & internet.

A Cartoon Network New generation Study, 2008, India, reveals the impact of children’s demand on various category growths that extend from FMCG health drinks, eateries, school related utilities, etc to major household purchases to electronic gadgets like iPods, computers, etc. They also drive the demand for videogames, play stations, etc. Hamleys which is a high-end toy shop based in UK has entered the Indian markets. The increasing Children population on one hand & the willingness & the ability to pay in the working group on the other, has massively accelerated demand of children centric products. Earlier, ‘children’ formed a niche segment. But, today, their influence is increasing in all the buying decisions.

Kids are emerging as a group of informed customer and media is impacting their brand choice, buying behaviour and buying patterns. Rural marketing is a passé now, targeting kids is the way to grow now. According to one statistics, kids channel contribute only 18% of the total viewing and 80% is still GEC, which shows the untapped potential of the segment. They have a simple rule, they will buy whatever they will watch over the television.

India has change a lot with the globalization and changing economic environment. One thing that has changed dramatically is the joint families changing into nuclear families. Also, with more number of females getting into job, the income level of the families is increasing rapidly. Research shows that, children of single parent make their first purchase at a very early age as compared to two-parent families. Parents are giving their children expensive goods to compensate not being able to spend time with them.

Effect of Awareness Levels of Parents on Child’s Consumption Pattern 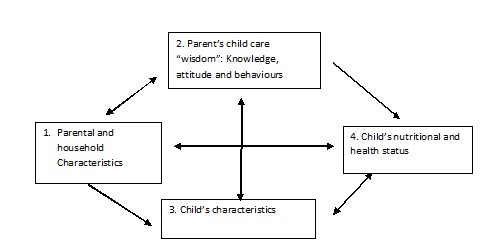 But after all this, it is still to be finding whether children are ready to be drawn into this war of consumerism, which might alter the personality at this tender age. What is right and what is wrong is still the question to ponder over.

This article has been authored by Aakash Sharma and Ann Varghese from NMIMS, Mumbai.