Is There A Better Way To Sell To Rural Market

Gone are the days when companies thought, “We are a brand and we SHOULD cater only to the high end urban markets of India”. Gone are the days when companies thought the urban market of India is the place where all the profits and cash flow lie! Today, companies are going gaga and bunkers over one word that is RURAL. Because if they don’t, somebody else is definitely going to run the race faster and cash on the humungous potential that lies in the rural markets. But the most important part is running the race the right way, which means finding new and innovative ways of tapping into the rural markets.

Let’s first take a sneak peek at what the hulla is all about and why is that right from FMCGs to the Automobile Industries, everybody’s gaze is turned towards Rural India. Rural households form 72% of total households. Increasing levels of income coupled with more and more penetration to the rural markets is expected to take rural FMCG from the current Rs. 87,900crore to a market size of Rs. 1,06,300 crore by 2012, which is a CAGR of 10%. Moreover, the global information and measurement company Nielson has revealed that around 80 percent of FMCG categories are growing faster in rural India as against urban India. Well, after this we can safely suggest that the future drivers of growth are the rural markets. But before foraying into this market it is very important for marketers to understand the dynamics governing it. Not only are the conditions of the rural market very different but also the rural consumer psyche is uniquely distinctive as compared to the urban markets. Let’s examine how.

Rural Consumers are inexperienced when it comes to dealing with the modern ways of marketing goods. They draw information from friends and relatives rather than relying on advertisements. For them, owing to the closeness that exists within the inhabitants of a village, social acceptance is far more important as compared to other things. This is reiterated from the fact that important decisions are taken collectively by the whole village, mostly in the Panchayat meetings that take place. Also rural Consumers are mostly averse to strangers selling to them as they are wary of being cheated and owing to this fact they usually stick to one retailer and maintain loyalty towards him.

In view of the above characteristics, rural marketers are taking umpteen efforts to sell products in the ‘rural way’. With stalls opening up in Haats and Melas, to promotions in local language in mobile loudspeakers, to performing skits in the common areas to demonstrating the product benefits, anything and everything is being tried by the companies for success in the ripe rural market.

But one technique that remains untapped in the rural markets (though it has been a successful business model for some companies in urban areas) is Multi Level Marketing.

What is Multi Level Marketing?

Multi level Marketing (MLM) is a method of selling products where each distributor has two jobs:

This is because the distributor gets sales commission not only on the products/ services that he sells directly to consumers but also on the indirect sales of persons that he has recruited. Thus the distributor is encouraged to recruit more and more people and a hierarchy of distributors is formed. Though this model has been successfully used by companies like Avon, Amway and Tupperware, there are two disadvantages to it which have led to wide spread criticisms for it.

Here we have tried to tweak the MLM model in order to do away with its disadvantages. This is how a form of MLM can work for the rural consumers.

A model for a product that needs a quick reach, spread of word of mouth and creation of buzz: 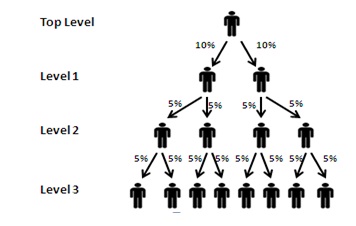 This model would comprise of multiple levels of consumers where one of them will be at the top level and there would be multiple consumers under him down the hierarchy. All these consumers including the one at the top level would be able to enter this chain only when they themselves are buyers of the products.Each level can earn 2 kinds of incentives

Example: Taking Figure 1 as reference, assume that a Rs.100 product is being sold, and a person gets 10% commission on what he sells directly and a 5% commission on what people he sold to, are selling to others. Here Top Level person is selling to 2 people (Level 1). These 2 people now get the power to enter the chain and sell to more people, so they sell to 4 people(2 each)(Level 2). These 4 people sell to 8 people (2 each) (Level 3).

How and Why will the model work?

The above model very well can address the issues of conventional MLM in the following manner:

This model is also in sync with the rural consumer psyche which was explained earlier.

This model should work really well for the FMCG goods where the customer engages in impulse purchase and awareness and word of mouth are the only things primarily required for making a sale. Also sectors like telecom can make use of this model for enhancing the sale of their SIMs and recharge packages where again customers don’t think much before buying.

Hence, there are reasons galore that this model is going to work wonders for the companies. In the coming future, more and more companies are going to flood the rural markets with their product, hence the need of the hour is to get the first mover advantage and grab the eyeballs of the rural consumer, as time and tide wait for none!.

This article has been authored by Isha Agarwal and Urvashi Jain from NMIMS, Mumbai.

Image Courtesy: By த*உழவன் (Own work) [CC-BY-SA-3.0 or GFDL], via Wikimedia Commons