In 2005-06 a phenomenon called Orkut hit India. People were totally hooked on to it. Everone created a profile on it in 2006 and after that a social networking revolution came to india. In US, Europe etc  this had already started 2-3 years back. MySpace, Facebook etc were already super popular.

India also caught on well with all these trends. Orkut became a passe as soon as Facebook took over for Personal and social networks, LinkedIn for professional and MySpace just for timepass in the Indian context.

Then suddenly new words started to make some noise in the cyber space. These words twitter and tweets took the world by surprise and shook it! They introduced the concept of microblogging  and SMS type social networking.

Twitter has changed a lot of things. When people first heard about it and saw it, everyone thought,"one more in the crowd but interesting name!"

But then this word kept on creeping on the Internet, magazines.

People made their own profile and started to TWEET.

Twitter has made marketers rethink the way they market. You can follow (twitter term) any company and get their tweets on your twitter profile. On twitter you can find more companies than users. All have their twitter accounts and send tweets to their followers and it is the new age marketing.

New product launches, new ads, relaunches, news about the company or  even results, the companies send it through tweets instantly. Viral marketing has a whole new dimension and medium to grow.

Nobody knows why twitter has become so successful. Some say theyre lucky, some say chance and some say it was good.

But when you see the data you think why is this SMS type site 25th ranked site in the world with 26 million monthly users just in the US. In Social networking, it ranks 3rd after Facebook and MySpace. You can have more info on Twitter data and demographics here.

The reasons we gathered from different websites are listed below. 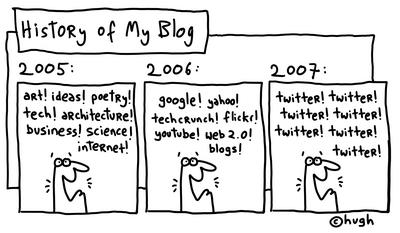