To be a market leader, the most important aspect is to understand consumer needs and then make them understand by comparing its utilities with their needs. In present market conditions, it takes years for a product to cement its place and compete with the existing brands. If we just imagine the scenario some years back, the only brand in deodorant market which we could remember was Axe. In less than a year axe, a market leader with market share of 18 % has been toppled by Fogg, taking a market share of 12% in short span of 2 years. Presently Axe, has even lost the 2nd spot and is on 3rd position in market share after Fogg and Park Avenue.

Axe, launched in India in 1999 and is a global brand available in 60 countries. Axe has consistently strengthened its imagery of a cool, iconic and youth brand. Fogg was launched in India in 2011 with a new concept of no gas and only perfume. The basic idea of Fogg was to tap a market gap and understand human psyche.

With Deodorant market today stands at 1500 crore, growing 5 folds in past 5 years. We would analyze both the brands with some parameters to have better understanding. 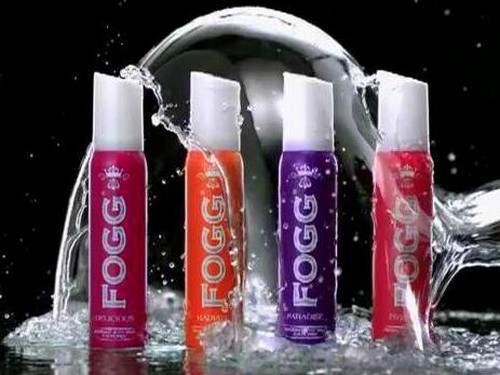 Fogg is a product of Vini Cosmetics with a punch tagline of “without gas body spray” and “again finished”. It came with a basic USP of long lasting fragrance and guaranteeing 800 sprays for a single Fogg bottle.

Axe a bi product of HUL limited mainly concentrated with advertisements usually broadcasted with Indian youth in mind. The angels dropping from the sky and dark temptation advertisements from Axe are tough to forget.

Businesses are successful if they prioritize consumer behavior and innovation. When all the Deodorants brands were coming with the same type of product, Vini cosmetics came up with a different type of product, a liquid based product instead of gas. The people of India have a common mindset of getting more for less capital. Fogg understood this human behavior and delivered a product in Indian market with demonstrating this product with only liquid and no gas. Axe, on the other hand was concentrating on more fragrances by keeping an image of cool and iconic brand.

Fogg, identified distinct group of buyers as fashion oriented and trendy. It segmented the people who are willing to try new products with a common notion of getting more for less. The target group of Fogg was similar to other deodorant brands as young and middle class. The brand even targeted women by selling large varieties of women deodorants. The market share of Fogg in women deodorant segments has garnered share of around 10%. It positioned its product as a deodorant with only liquid and which lasts longer than any other deodorant in the market.

Axe, also segmented mainly students and bachelors with middle and upper middle income group with similar psychographic as outdoor-oriented and trendy. The target group of Axe was Males (18-30 years). It tried to target youngsters mind by showcasing the product which can attract girls. They targeted the audience presuming that Indians will adopt the foreign commercial easily. It positioned its product by continuously launching new fragrances with internet based marketing.

Fogg products were marketed with quantity, quality features and services. Axe was instead marketed with Brand Name, Packaging, quality and mainly with variety.

The other component price of marketing was one of the special traits which made fogg initiate and secured its place as market leaders. Fogg kept its price at par with other deodorants and projected it as long lasting and more efficient.

Now the third component of marketing mix is place. Place components were almost the same for both the brands. Both concentrated on similar mediums such as channels, coverage and location.

Now the last component of marketing mix promotion was the one which basically made the difference between the two brands. The basic aspects were different ways of advertising the product. Axe used adventurous marketing; fogg used a marketing formula of upgrading its own image by degrading the image of other deodorants.

Vini Cosmetics, a Indian based firm strategized Fogg with an image which could directly strike the Indian psyche. They understood the market and came with a product which could set their image as a product with utilitarian use. Instead of having a same strategy of gas based product they tapped the Indian market with a deodorant full of liquid. It was never happened before that a similar product came with a similar idea.

One more important was advertising the product with a different angle. The theme of 85 % of the deodorant advertisements could be summed to hulk, foreign girls and the girl’s attraction after he sprays deodorant on his body. Fogg never advertised in this way. It projected itself with a product who values Indians by giving them product which can be utilized more in a similar price. The other aspect which Fogg concentrated was showing other deodorants as wasteful and with long lasting aroma.

The other area which Fogg tapped was women deodorant market. Axe was mainly concentrated on Men’s grooming products.

Total Revenue for HUL is projected to be 30,170 crores in 2014-15. In 2000 crore deodorant market, Fogg is a leader with 12% market share. The revenue from Fogg is around 25 crores as compared to axe which decreased to less than 20 crores. Viewing these figures HUL at present scenario can’t proudly say Axe as a product which led the market few years back.

Success of Fogg in such as short span of 2 years can be focused on two clusters, market performance and brand performance. The impact of the product can be realized by a simple fact that it surpassed the product which was launched more than a decade before Fogg came into the market. It would be wonderful to see in the future if HUL launch a similar product which values liquid more than gas or it will innovate the same product and make Axe reach a commanding position in coming years.

This article has been authored by Mayank Bhatia