Every person wishes to see happiness, creativity, fun and joy around them. Jingles of joy, dancing on melodious tunes, adorable characters etc all bring a vibrant charm for a person. And there is one brand which has been creating magic and a world of dreams since a long time- Walt Disney Corporation.

Walt Disney Corporation is the biggest entertainment organization in the world positioning itself as a universe of creativity for children through entertainment. Its diverse offerings range from cartoons to movies to theme parks to toys to merchandise to video games. Disney is one name which creates a sense of happiness and joy in the mind of every person, be it the young or the old, rich or the poor. Disney, found in 1923, has caught the imagination the whole world with its adorable characters and has managed to cross all cultural, religious and linguistic barriers to become a truly global brand.

Walt Disney has become a household name due to various factors. Disney is one the few organisations which have managed to capture a target group way beyond its expected children segment with its innovations and creativity. The most important factor which has made Disney a part of our lives is their creative adorable characters. In the early phase of Disney, characters like Mickey Mouse (Official Mascot for Disney), Donald Duck, Goofy, Minnie Mouse and Daisy Duck became names which every person loved since their childhood. Apart from these, characters like Scrooge Mc Duck and the lovable trio of Luey, Duey Huey from Duck Tales also managed to create memorable cartoons for children.

Under the main umbrella brand, Disney has ventured successfully in various fields. The animations series for TV had an unparalleled success in the mid twentieth century. Gradually, Disney also migrated into the movie business, where they not only managed to expand as a business but they also increased their target base exponentially. Disney has created landmark animation movies like The Lion King, Aladdin, ToyStory, Finding Nemo etc, which are brands themselves. Other movies include Snow White and the seven dwarfs, Cinderella, the Jungle Book, 101 Dalmatians etc alongwith 3D movies like Bolt and ToyStory 3(Pixar is a wholly owned subsidiary of Disney). All these movies received worldwide acclaim for their ability to connect with the audience and increased their brand loyalty and brand presence tremendously, having with over a billion loyal customers.

The financial statistics of Walt Disney are summarized as below: 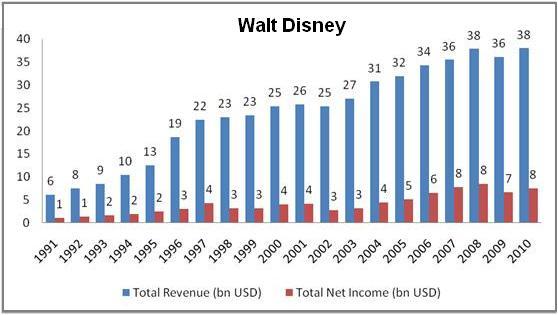 Another major factor, which has made Disney one of the wealthiest and strongest brands globally are the Disneyland theme parks. As of 2011, there are 11 theme parks in places like Paris, Florida, Hongkong etc which create a magical world and give an experience of a lifetime for everyone, from children to adults. Games, joy-rides, roller coasters, Disney parades, stores etc all form a part of brand building of this enormous brand name.

Love, happiness, joy are some things which every person desires everyday in their lives. To be living in a world of fantasy with fairies and adorable characters around is what people dream every moment. And there is only one brand which creates a world of magic for every person - Disney.