It was on May 8, 1886 that Dr. John Pemberton mixed the magic portion of coca cola syrup to carbonated water and sold it for five cents a glass. Pemberton had no clue of what was to become of this fluid he formulated. Today coco cola’s logo is one of the most recognized trademarks in the world, spread across 200 countries it is the largest producer of non-alcohol carbonized drinks and known for its marketing tactics.

Worldwide the category of cola has been built on marketing  alone, no matter how much the two biggest players (Pepsi Co & Coca Cola) in this space try to differentiate themselves on the basis of their ‘Formula’, let’s face it except the amount of sugar content in each of them there is very little to distinguish. Hence these two companies choose their fatal weapons of advertising which has a huge role to play in consumers picking up one over the other.

Like most companies in search of untapped markets, Coca Cola Company, Atlanta had a hawk’s eye on India. The company first made its entry into the Indian market in the year 1956 and made a good fortune. The Indian economy was increasingly regulated and many industries were restricted to the public sector, this movement reached its peak in 1977 and the Coca Cola Company had to exit the Indian Markets.

The Rebirth: Coca Cola has re-entered India in 1993, giving its competitor Pepsi Co a huge four year heads up into the Indian market which used this opportunity to capture much of the Indian consumer’s imagination. The Coca Cola Company knew it had to bridge its absence of 16 years from the Indian market aggressively and quickly, with two-pronged gambit. One through acquisitions, by cementing itself with the nation’s top soft-drink brands (Thumbs-Up, Limca etc.) which give instant access to established bottling infrastructure along with good brand portfolio. Second, turn on to the jingles and bring on the celebrity endorsers.

During this period the company’s marketing department focused on jingles, celebrity endorsements and tag lines to reach out to consumers. 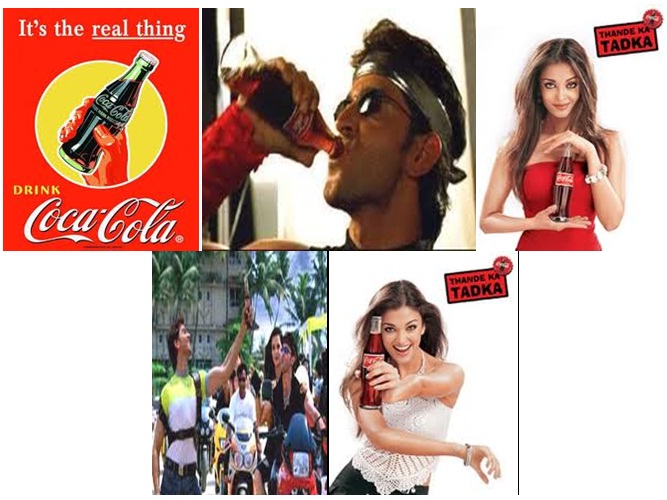 The Next Decade: Since 1993-2003, Coca Cola had invested a whooping amount of US$ 1 billion in India, making it one of biggest foreign investor in the country. In 2003 Coca Cola was ranked the # 1 brand in the world and estimated its brand value at $70.45 billion. It believed in a brand positioning strategy called as the 3A’s

Reaching to the masses and increasing the per capita consumption of cola in the massive landscape of India was the challenge for coke during this point of time. The rural market of India represented a major opportunity (96% of Indian population) for market penetration and a battleground for market dominance. Its mantra was “Within the arm’s reach of desire”. Additionally, an average coke costing around Rs10 and an average wage for a day around Rs100, coke was presumed as a luxury that only few could afford hence, to cater to the high potential markets the company introduced the 200ml bottle, smaller to the traditional 300ml version at Rs5 only bridging the gap between coke and traditional refreshments like tea, lemonade etc. making coke truly accessible.

Coke had to sketch a unique ad campaign to penetrate into the remotest places of India, this is when the “Thanda Matlab Coca Cola” happened and took the company one notch level up in terms of the connect with the masses of India. This campaign featured actor Amir Khan playing regional roles and helped coke to strengthen its brand equity. The campaign targeted the segment whose primary needs were out of home thirst quenching. 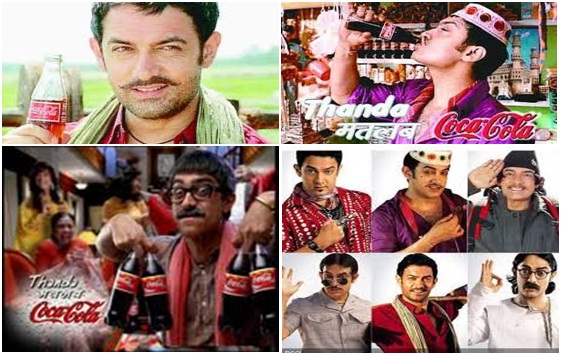 “Thanda” meaning cold/cool is also generic for cold beverages in India, giving the campaign multiple meaning of cold refreshments and thirst quencher relating itself as cold Indian beverages like lassi or lemonade. The “Thanda” campaign became to be known as gem of a tagline and most effective by any brand in the soft-drink category. In the year 2002-2003 91% of the sales were made to lower, lower-middle and upper middle class who largely came from the rural regions of the country.

Hitch in the Journey: On 5 August 2003, the center for science and environment (CSE) issued a report stating “12 major brands of cold drinks sold in and around Delhi contain a deadly cocktail of pesticides residues”.

The company had to redesign strategies to heel from the damage caused due to the controversies of 2003-2006. The new brand development strategy stressed on the so called 3 P’s:

Since 2009 Coca Cola Company has been running the “Open happiness” campaign worldwide, which was adapted by the Indian Market as well. This was the first time that the company adapted a global campaign unlike the traditional tailor made local advertising. This campaign featured Imran Khan who has been a part of the Indian execution; however he was not able to recreate the magic that his uncle Amir had accomplished for the company in 2003.

Then came the ‘Brrr..’ campaign in 2010, again an adaptation of South Africa’s brand campaign. "We are coming up with our latest campaign called 'Brrr'. Through this campaign, we are giving the whole experience of having an ice cold drink. The campaign has manifested the spontaneous experience of consumers when they have it," Coca-Cola India Brand Director (Coca-Cola and Trademark) Avinash Pant said.

However the results of the campaign don’t look impressive, is it time to rethink of the company’s positioning?  It seems that Coca Cola Company once known for its killer marketing tactics has lost track in today’s spoilt for choice consumers.

The biggest question remains, can coke bring back its advertising charm?

This will not be easy for the largest soft-drink company as it has missed out on the World Cup opportunity, providing its competitor Pepsi a clear path to move far ahead. Still hope remains for the company as they could capitalize on the brands recent association with the Olympics, which could be the ticket for a comeback.

This article has bee authored by Siddharth Jaiswal from IMT Hyderabad.