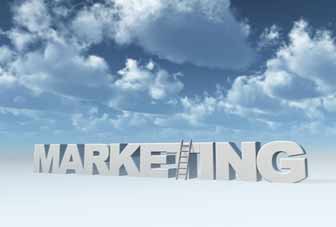 The use of disconcerting images that often border on the offensive, to draw the consumer’s attention, is a well-known marketing ploy that has been around in the West for quite some time now. In fact Benetton is considered to be the pioneer of shockvertising and its advertisements in the late 1980’s were the first of its kind which shocked the people.

Why the shock in advertising?

Shockvertisements use controversial, disturbing, explicit and provocative messages that challenge the public’s conventional understanding of the social order. It may not only offend but can also frighten the audience, to sell a product or deliver a public service message.  It creates a lasting impression in the minds of the people who have had one look at the advertisement as it is one of its kinds. Humour is commonly used to make promotions interesting and to grab the eyeballs. But to break the clutter, to bring something different in the market, advertisement makers resort to using shock in their advertisements. The result- "high impact” and “better recall” among those exposed to these advertisements.

Impact of Shock on the audience

Advertisements which use the negative emotions to create shock do not make the audience feel good after being exposed to such advertisements. So using shockvertising may actually evoke negative feelings whenever the customer sees the brand logo or name of the company and may cause an uncomfortable feeling along with the brand recall.

In case of a cause or an issue, using shockvertising can work by getting the attention the cause deserves and getting people interested in contributing or working for it. It can sensitise people to other cultures and ways of life. Causes like Child Abuse, Domestic Violence, Lung Cancer, AIDS, and Animal Rights (PETA) have used shock advertising very effectively in the international context. 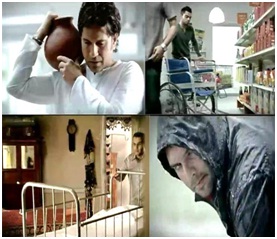 This is a recent ad for Sahara Q shop featuring Sachin Tendulkar, Virat Kohli, Yuvraj Singh, Virender Sehwag and Mahendra Singh Dhoni .The presentation of the ad at the extreme level made the advertisement controversial. The message to be conveyed in the advertisement was to promote the adulteration-free products offered at the store. But to see these cricketers perform the last rites, dig graves evoked a lot of negative response from the audience. 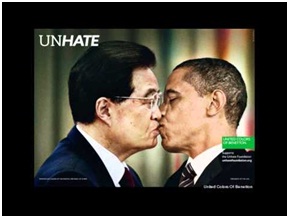 United Colours of Benetton launched a shock and awe advertising campaign called “Unhate” to boost its lagging brand recognition. For this they created a bunch of tailored photos of the world leaders kissing each other on lips, which was not taken in good taste by the people. 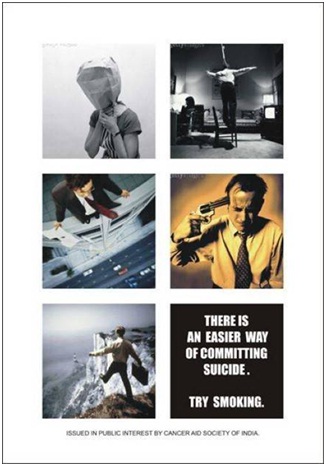 This shockvertisement from the Cancer Society of India uses pictures of attempt to suicide to convey the message that Smoking is an easier way to end life than any of the methods depicted by the pictures. 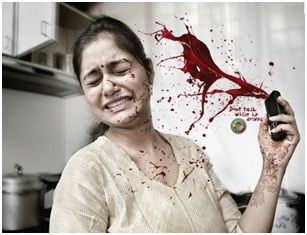 Bangalore Traffic Police has been running an outdoor advertising campaign using disturbing photography to shock people and to discourage them to talk to their friends and families on the phone while they are driving. Men and women are shown grimacing as blood spurts out from their telephones. The tag line: “Don’t talk while he drives”.

To shock or not to shock?

Any brand trying to sell product and services must add to the happiness of the customer. Experts say brands need to have positive imagery in order to have an excellent brand recall. Across the globe, brands like Coca Cola, Dominoes have all used positive imagery for their brand promotion. Shockvertisement may cause anxiety and increased pulse rate each time the advertisement is aired, but if they are made tastefully, to not cause repulsion from the audience and with a message to arouse consciousness among the public then it will definitely have a deeper impact on the customers. At times negative imagery can also create positive impact as seen in the above examples. Ultimate is aim to get desirability and not negativity or repulsion for your brand and these needs to be taken care of while creating shockvertisements.

This article has been authored by Nidhi Sarda from JBIMS.