The year 2010 marked the end of one of the world’s most successful corporate marriages – Hero Honda and a new beginning for The Munjals of the Hero Cycles Ltd. Back in 1984, the two firms shared a common belief that India with its burgeoning population, low per capita income and unorganized public transport system, would be in need of frugal means of personal transportation. Hero with its inherent knowledge of selling products in India was the champion in Sales & Marketing and Honda was the undisputed leader in two wheeler technologies worldwide. After 26 years of sharing technology to makethe most economical and fuel efficient motorcycles for the Indian consumers, Honda Motors decided to move out of the joint venture. This divorce enables the Hero Group to export its motorcycles to other nations which was not possible earlier and brings us to an exciting birth of a new brand – Hero MotoCorp.

The world’s largest manufacturer of two-wheelers by volume sales for nine consecutive years since 2001and one of The Forbes 200 Most Respected Companies in the world – Hero Honda has come a long way. With a massive 5 million strong consumer base and more than 20 million two-wheelers on Indian roads, Hero Honda truly became Desh Ki Dhadkan with DhakDhak image touching the hearts and strings of everyone across the nation.Rebranding this big a brand would be a mammoth task in order to move out of the mould of Hero Honda and ride into newer and different horizons. The Hero Group roped in London-based Wolff Olins -a global brand and innovation specialist, to work on its new identity including the brand architecture, brand name, brand logo and brand positioningwith an underlying theme of Creation, Renewal and Re-energizingthe brand.The entire re-branding exercise would involve a gradual shrinkage of brand Honda and place Brand ‘Hero’ on all its products by 2014.

The new logo shows the letter ‘H’ in capital with a clear white background along with ‘Hero’ written beneath in Red. The black color in the logo stands for solidity and premium-ness while the Red gives a feeling of energy, passion, and confidence. To represent ‘Hero’ in 3D, the logo even has a triangle, trapezoid and a parallelogram in the first letter of its name. The sharp edgesdepict style, engineering and innovation. The new logo is designed to relate to the youth and their 'can do' spirit.

The company has rolled out a new anthem‘Hum Mein Hai HERO’ (There’s a Winner in All of us), composed by A.R Rahman with the campaign launch on 15th August to capture the maximum eyeballs and was received with a lot of excitement and applause by the massesthat could connect the HERO-ism of the brand with their daily challenges and a true winning spirit. I agree with Mr. PawanMunjal, the CEO of Hero MotoCorp, who explains this campaign as a true sense of Indian Catapult which signals that although its roots are very Indian, it is ready for global expansion.

I like the way the Hero Group has re-positioned itself for the emerging Brand India. But the real test begins for the Munjals who will now have to look at building very crucial R&D facilities required to operate in a tough market like India. As a consumer, I’ve always felt that the real Hero in the new-age Hero Honda bikes was the Honda engineviz. CBZ, Hunk and Karizma. HeroMotoCorpneeds to make its consumers aware of the technology advancements and progress they make in their motorcycles to maintain their leadership position in the market. With players like Bajaj, TVS and Honda rolling out exciting models every year, we just need to wait and watch if the new HERO becomes India Ki NayiDhadkan or not.

The Brand Journey of Hero 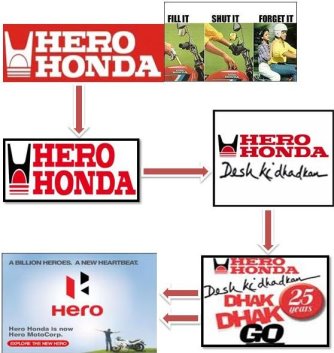