Drones - The Present and Future of Robotics in Logistics

In December last year, Amazon’s CEO Jeff Bezos had unleashed an idea of use of unmanned drones to deliver the orders to its customers within 30 minutes after ordering, with its new Prime Air service. Facebook CEO Mark Zuckerberg, desirous to embrace drones to provide the internet facility to the internet deprived areas. Google has acquired a drone startup this year, Titan Industries, to pursue its dream to reach to the underserved area by providing new users an access to the internet, with the help of unmanned drones. In June this year, Federal Aviation Administration (FAA) has given a nod to British Petroleum to fly drones over Alaska to inspect and study new oil fields in the region, which makes BP the first one to get an approval by FAA to fly an unmanned drone for commercial purpose over American soil. Not only the big organizations but startups and smaller businesses are also looking at these useful toys to elevate the level of customer service at the least possible cost. A florist from Michigan area was found to be testing drones for delivery of flowers, small pizza outlets in India and Russia are showing their mettle to serve the customer the best by using drone delivery, are some of the examples. 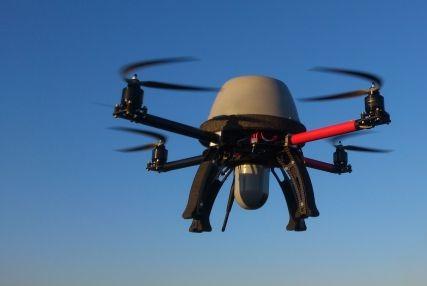 Looking at all these innovative ways of using Unmanned Ariel Vehicles (UAV), it is evident that the leading enterprises have started looking at the drones as a tool to be used for commercial purposes. The purpose would be different for different businesses such as delivery, internet service, mapping, photography, public services etc., in the similar way advantages that they seek from its use would also differ such as faster delivery, reduction in cost of operation, accessibility, availability and reliability of service etc. Whatever is the purpose of the using drones it is learnt that it will have myriads of applications independent of the core business of the organization.

Necessity is the mother of all inventions. The very well-known saying is also applicable in case of development of UAVs worldwide. All the possible applications of unmanned drones have given rise to speculations by the parties involved about the size of this new upcoming market. The current market size of aerial drones is around $98 billion, of which major contribution comes from military spending. In the coming decade the market for commercial drones is expected to rise as high as $12 billion.

To reap profits in a highly lucrative market many new startups are coming up and acquisitions of such startups by big organizations is no more surprising, such as Facebook acquiring a UK based startup Ascenta. Last year, in India only, half a dozen startups have been set up to offer drone technology for customer friendly applications. Although the new investors are bullish about the market and engineers are testing the product at various conditions to make it near perfect, the big players in the current market such as Boeing (revenue of $81 billion), General Autonomics ($640 million), who are experts in military drones will also try to boost their profits out of commercial market by offering the best in class technology.

Figure 1.2: Different types of drones currently available for all purposes

Being very optimistic about the possibility of the use of unmanned drones for various commercial purposes makes a very rosy picture about the development of the new market. However, for those sitting on the other side of the table, the regulatory authorities, are apparently not so much in hurry to see the transformation of this imaginary picture in reality. The regulatory authorities are taking very cautious decisions over the use of drones for commercial purpose for various applications, especially for transportation. For example FAA of USA is considering allowing the use of drones for filming, surveying and for agricultural benefits.

Among the possible applications such as internet service provider, photography, filming, mapping, are seem to be viable. There are two reasons; first being that these drones will fly at certain altitude without disturbing the public life. And second, the private take-off and landing area will be defined, secured and hence safe for operation. Whereas, commercial use of drones for delivery, as proposed by retailers, will face some issues as the drones are going to enter the public space regularly for delivery purpose. The use of drones for door to door delivery is a difficult task from technology, safety and security point of view such as;

• Technological hindrances such as, navigating safely in the unfamiliar residential area, landing in the designated spots, further development in GPS technology are to be overcome before it becomes a perfect machine.

• Safety aspects for both residents and drone robots so as to prevent casualties and damages when flying at lower altitudes around trees, buildings, light poles, birds, children, dogs, telephone lines.

• Security is the major concern right from theft of the order or drone robot itself to the event of misuse of drones for terrorist activities.

Has the time come for the new mode of transportation?

May the drones are not seen as a viable option for door to door delivery in the near future, there is a possibility of using this technology for stock transfers among manufacturing locations, warehouses, distribution centers and retail stores. Business to business transportation using drones is not as complicated as business to customer deliveries as the private space for landing, safety and security will not be a concern. As I mentioned earlier, flying at higher altitude it will not disturb the public life in any way. But considering the load carrying capacity, operating range, fly time and most important cost of operating per unit weight, may not match with the requirements of stock transfers. Barring a few cases, drones are not economical for transportation as compared to current mode of transportations used. It will be like having your own fleet of aircrafts plying between the two commercial locations delivering the freight by air losing upon the scale economies developed over the years, back to square one.

Besides, this revolutionary idea will have repercussions, political as well as on the economy of the region. The increase in momentum for advocating bans and restriction on use of drones has become evident when UN Human Rights Council called for global freeze on use of drones. The use of drones will keep currently employed people at tenterhooks; of course you no more need people in the major part of supply chain network to deliver the courier to a customer, what else they would do then? The inevitability of encroachment of robots in human life is an apprehension here. 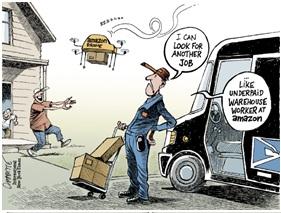 Despite of all these issues, the tremendous technological potential cannot be foregone. The various authorities may not be able to defend the ban on use of drones for longer; the only possibility is to delay the implementation, but how long, is the question. We may see the service provider drones flying around, at higher altitude though, sooner; but to expect a robot coming to your door to deliver groceries, books that you have ordered minutes ago, will take some more time.

This article has been authored by Pravin Bokil from KJ SIMSR

• Kenneth Korbin, Drones for Ecommerce Delivery? Not So Fast, Ecommercebytes.com, May 27, 2014