“It is not the strongest of the species that survives, nor the most intelligent that survives. It is the one that is the most adaptable to change.” – Charles Darwin

Change, you see, is omnipresent. The way we live, the way we eat, the way we brush our teeth and the way we court pretty maidens – nothing has been able to escape its ambit till date. You either adapt to the change around you or you die. The strongest of people, of animals, of buildings, of empires, all crumble in the face of the inevitability of change. It is only the malleable that survive the test of time. So why, pray, should the same question, posed in the domain of marketing, merit a different answer? 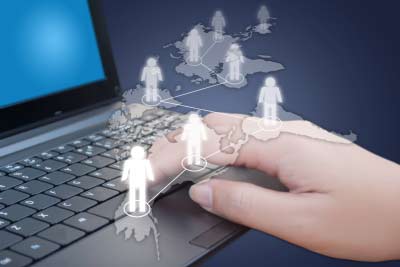 Technology is man’s attempt at playing God. It is the method we adopt to bring about change in ourselves and in the world around us. It can make life simpler for some and unbelievably complex for their parents! But, most importantly, technology is our attempt to make the world a smaller place.

So, if marketing is a set of human activities directed at facilitating and consummating exchanges, then, by bringing people around the world closer to each other, technology creates a channel for marketers to connect to their target audience in a manner much simpler, more cost-efficient and more effective than that otherwise possible. Companies and organizations who successfully adapt to the change brought about by technology inevitably reap rich dividends while those who do not, die.

Consider for a moment the theory pertaining to the Technology Adoption Lifecycle as proposed by Messrs. Bohlen, Beal and Rogers. A key proposition adopted by them is that ‘people's behaviors are influenced by their peers and how widespread they think a particular action is’.  This is where the importance of a concept such as word of mouth marketing, for example, lies. Any cinephile worth his or her salt will inevitably go online and see what an IMDB or a Rotten Tomatoes has to say about a movie, before he or she decides to invest his or her time and money in watching it. Any party animal or gourmand will be sure to look up a Burrp or a Zomato before making plans for an evening. The same is true for just about every consumer product or service imaginable. Technology connects people and marketing does the rest by influencing their opinions.

So, if internet technology offers marketers the advantage of increasing their reach to tap more customers with just the click of a button, other technologies offer opportunities pertaining to quick and efficient design and production. Marketers can now respond with far more speed than before to meet ever-changing consumer wants and requirements on an almost real-time basis. Closely related to this is the increased ability for marketers to measure and collect data from the end users, based on which product and service offerings can be customized and personalized to a far greater extent than was the case before. Also, it affords all companies, whether big or small, a cost-effective means to tap universal audiences, while at the same time increasing the level of interactivity between the producer and the consumer and increasing the exposure of the consumers to products and services offered by the company in question, all of which of course, is aimed at satisfying the needs and wants of the end customer to a much greater degree than hitherto possible. Distribution too is affected through the use of new age web portals designed to enhance logistical capabilities, create new marketing channels and provide greater access for customers to a more diverse range of products through the likes of e-commerce sites such as an eBay or an Amazon. So, if one were inclined to view matters through the lens of the 4P analysis, one would come to realize that technology allows marketers to influence product design based on feedback received from their end customers, to affect its places of distribution by creating new channels, largely based on e-commerce, to re-evaluate pricing options again based on customer feedback and peer reviews and finally, to effectively design and execute promotional activities on a global scale while cutting down on costs at the same time. In short, there is no aspect of marketing that technology does not influence.

But, before one were to start singing paeans to the glorious virtue of technology, its disadvantages and pitfalls should bear close examination as well. So if technology affords marketers from a particular company to make life simpler for themselves and their company’s balance sheets, the same would hold true for their competitors across the street as well. The degree of availability of technology is so high that it is not uncommon to witness a veritable arms race in marketing wherein each company tries to get the better of the other. This high level of competition then results in greater expenses for the companies involved and higher levels of stress for their executives, thus nullifying the cost benefits afforded by technology to a large extent. One must also remember that the use of technology only furthers our increasing reliance and dependence on the same. This gives arise to increased costs of maintenance for the same, again chipping away at the cost-effectiveness proposition and also to multiple issues related to privacy and security concerns. The threat in this respect is very very real. Also, if companies are now getting better access to their customers, worldwide, then it is also true that they now have to deal with a greater number of competitors than the case before as well, all of whom are looking to tap into the same technology that they are using – a cakewalk in these days of duplication – to reach out to perhaps the very same set of customers.

However, its benefits cannot be denied. While we are all very familiar with the successes of the likes of “Why This Kolaveri Di” and “Gangnam Style”, we often forget the simple fact the kind of viral marketing responsible for their phenomenal success, was only made possible through the effective use of technology. The level of success obtained by the likes of John West’s ‘Bear’ campaign in 2000, Dove’s ‘Evolution’ campaign in 2006, Burger King’s ‘Subservient Chicken’ and ‘Whopper Sacrifice’ campaigns in 2004 and 2008 respectively, Cadbury’s ‘Gorilla’ campaign in 2008 and Tourism Queensland’s ‘Best Job in the World’ campaign in 2009, would simply not have been possible without the effective use of technology in marketing.

However, perhaps the best example of the use of technology for the purpose of marketing was the case of President Barack Obama’s election campaign. Be it grabbing eyeballs, encouraging first-time trials or inducing loyalty among customers they did it all, and in style, as marketing underwent a sea-change in its very form with advancements in technology. They adapted and therefore they survived. But what of those who did not or could not adapt to the change in technology? Take the case of Holiday Inn’s ‘Transsexual’ campaign, or Reebok’s ’50 Cent’ campaign, McDonald’s ‘I’d Hit It’ campaign or Diesel’s ‘Be Stupid’ campaign. All giants in their respective industries, yet all culprits of not doing enough homework and therefore not having the well-thought out marketing strategy that is so necessary to leverage technology in the best manner possible. Result? The campaigns died, the products perished and the balance sheets plummeted.

Today, technological advancements such as search engine optimization, the effective use of adwords and social media marketing, have all redefined marketing by simply defining how best we use our time and therefore by literally turning time into money. Even if technology creates problems for marketers, it is the very same technology that possesses the ability of solving them. If technology gives rise to security threats, it is the same technology that builds firewalls to protect one against such threats. If technology creates problems pertaining to duplication of processes and ideas, it also gives rise to the concept of licensing and intellectual property rights to guard against the same. The same technology can also be responsible for an abject failure and a phenomenal success at the same time. Hence, it all boils down to the effective use of technology by the marketer in question. Technology, therefore, is no manna from heaven for marketers and companies out to make a quick buck for themselves. It is rather a tool that has to be used in the proper manner to craft successful marketing strategies for companies and to chalk out their resultant growth trajectories.

After all, if Mr.David Brinkley is to be believed, “A successful man  is one who can lay a firm foundation with the bricks that others could not use.”

The article has been authored by Abhimanyu Das, Indian Institute of Foreign Trade(IIFT), Delhi