Aadhaar Card(UID) and it's Applications

Lets begin with a story; A Police officer is searching for a criminal for some case. He started his investigation at the place for finding some clues. He found a bloody thumbprint and takes it down to the lab, analyzes and matches it to a recorded set of prints thereby finds and catches the criminal. This is what most of the movies show us. In this case if the fingerprints did not match the recorded set of samples how can we trace that person in a world with nearly 7 billion populations?

Is this possible only in the reels or can we implement this even in real life?

We can make it possible in real life if we have the fingerprints of all the residents of a country stored in one database where we also store the entire information used to authenticate him and issue him a unique identification number. For example every citizen or permanent resident of Bulgaria has a unique 10-digit Uniform Civil Number. This number can be used for tracking their citizens for the purposes of taxation, government benefits etc. Many developed countries have this national identification number. 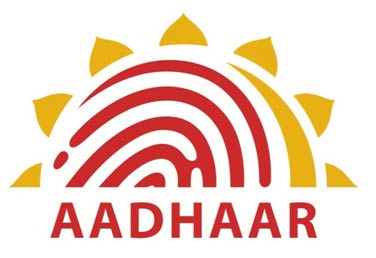 In India there are some problems regarding the identities like,

So India also thought of providing a unique identification for each and every resident of the country.

The UIDAI's mandate is to issue every resident of India a unique identification number linked to the resident's demographic and biometric information, which they can use to identify them anywhere in India, and to access a host of benefits and services.

The number has been named Aadhaar, which means 'foundation', or 'support'.

Despite emerging technologies in banking sector, rural people didn’t have access to bank services, where 40% of the rural residents did not have bank accounts. As the poor will transact in lower amounts banks will not find them attractive, as their transaction costs are high.

The strong authentication that UIDAI will vastly reduce the documentation that the poor are required to produce for a bank account, and significantly bring down Know Your Customer (KYC) costs for banks. So if every rural resident has an Aadhaar card then the banks can help him or her opening an account with minimum costs than earlier.

UID and its applications

Aadhaar card at present is issued on a voluntary basis. If it made mandatory it can be used for various applications in different fields.

Using Aadhaar card as Voter’s ID and implementing a technology at election counter where voter can either type his Aadhaar number or swipe his card, we can eliminate duplicates thereby reducing rigging in elections.

In a huge country like India it is always difficult to capture culprits. if any cc camera fortunately records video of culprit then by using that photo we can easily find out through the database of UIDIA. Also in some criminal acts if we get the fingerprints of the criminal, we can try to match them with the database and easily catch the culprit.

As Aadhaar card number is linked to a bank account, instead of ATM’s we can use Aadhaar card to withdraw cash, pay bills, cash transfer etc. Corruption, a major issue in India can be solved by this approach as we use the card for every transaction that we make, so it is easy to find the persons who transact in large amounts or who transact or spend more than their income. By this, illegal transactions can be controlled and corruption can be easily controlled.

Aadhaar UID uses biometric scanning to ensure the authentic identity of a person, whereas a Voters ID, driving license, even a passport can be forged.

LPG for Domestic Cooking is heavily subsidized. So people are using fake connections and misusing the benefits. If Aadhaar card is integrated with the customer database of LPG we can eliminate illegal diversion of cylinders.

Due to cash on delivery payment system offered by various e-commerce players there is a risk of a fake customer order or a customer denying that he didn’t order it. To avoid this we can authenticate the customer by asking his Aadhaar card number and the mobile number, which is linked to the Aadhaar. 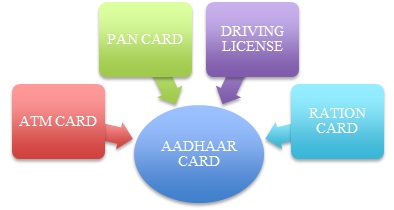 One card for all

If the Aadhaar card consists of all the information including address, photo, PAN card number, license details, Voter ID, ration card we can remove all the cards and use only Aadhaar card for all purposes thereby reduce large amount of paper. Link all vehicle registrations to Aadhaar card, all PAN card details to Aadhaar card. So Aadhaar card will be the only card providing Unique Identification.

Actions to be taken

To reap benefits from all this sectors, we need to make UID mandatory to all the residents of India. So that in 20 years down the line every person in the country will have UID cards.

As the population in India is huge it is difficult to implement and authenticate each time in every sector when a person want to receive any benefit. It will require massive amount of supercomputer, processing power, bandwidth and IT infrastructure at local, district, state and central level. This needs more budgets to implement. There are also concerns that personal data will be revealed if back search is done and possible security threat exists as bank accounts are linked to Aadhaar card. 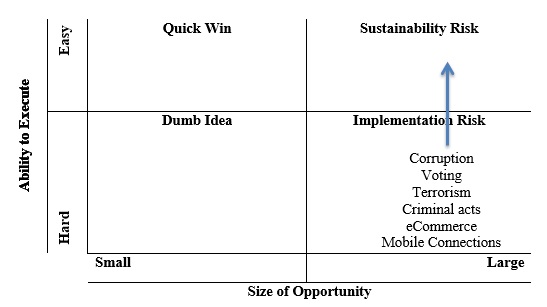 So when we consider the risk model we see that, as it requires huge technology and expertise the ability to execute is less but if we implement it we have a great opportunity for economic growth so we might face an implementation risk. But if a proper budget is allocated and the necessary technology is made available in every sector it moves to the sustainability quadrant and thereby we accomplish sustainable economic growth.

India is undergoing many technological and economic advances in both Government and private sectors. Still many people in India are solely dependent on government benefits and services. So for sustainable growth in the country we need to provide these services to the right person for which we need a verifiable identity. Aadhaar provides this unique identification facility. Also if we implement Aadhaar verifiable technology in every sector we can eliminate corruption, fake identities and have a fair process.

Article has been authored by M P  Prashanthi Priyanka, TAPMI