The first half of 2011 has not been inspiring for India’s economy owing to global as well as domestic issues. However, with strong fundamentals and demographic advantages, India remains one of the fastest growing economies in the world. With double digit growth in sight, energy sector, mainly oil and gas, will hold centre stage as it enjoys a positive correlation with growth.

Indian oil sector is going through a very decisive phase as production has not been able to keep pace with growing demand. But there remains a huge upward potential as is evident from BP’s entry into India and the fact that only a quarter of the country’s reserves are well explored. 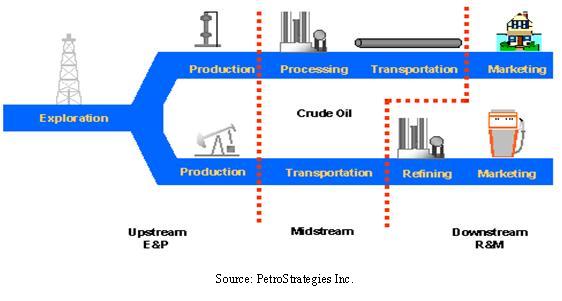 Natural gas is fast emerging as a major source of energy with its share in the total global energy mix rising to 23.8% in 2010 on account of it being cost effective, highly efficient and comparatively cleaner source. It is the predominant energy source in Europe and Eurasia.

The West Texas Intermediate (NYMEX) is the benchmark index followed in the US while Brent crude prices are followed across two-thirds of the world’s countries. India however follows a mix of Dubai crude and Brent benchmarks. Brent prices have consistently been above $100 this year and highly volatile due to the political unrest in the Arab world and North Africa and global macroeconomic uncertainties.

Coal is the largest constituent of India’s energy basket accounting for 53% of India’s energy needs whereas oil & natural gas satisfy ~40%. By 2025, oil & gas will account for 45% of energy requirements as India intends to reduce the dependence on Coal.

Between 2005 and 2009, India witnessed a compounded annual growth rate of 5.5% vs. the world rate of 0.2%. India consumed 155.5MMT (Million Metric Tonne) of crude oil in 2010, which represents ~4% of world’s total. Indian oil demand is almost back to full momentum with strong demand from industrial, agricultural and transportation sectors. India’s consumption is forecast to be 3.4 mb/d. There has been no significant change in production as India produced 1% of the world’s total oil production in 2010. It is predicted to grow by 0.06 mb/d in 2011. 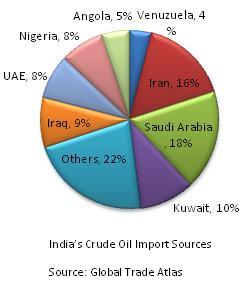 The Middle East is the source for nearly 70% of India’s imports, led by Saudi Arabia and Iran. The geographical dependence on Middle East & West Africa is set to continue in the future.

Natural gas consumption has seen an upward trend in the past couple of years. It stood at 61.9 billion cubic meters (bcm) in 2010. Yet natural gas only forms 11% of India’s energy mix whereas the global average is 24%. India’s per capita consumption is also very low compared to global levels. India consumes ~2% of the world total.

Natural gas production had been stagnant for a long time; however FY10 saw a major boost in production due to commencement of production from Reliance’s KG-D6 field. It grew by 45% (YoY) in FY10 and in FY11 it has grown by 10%. 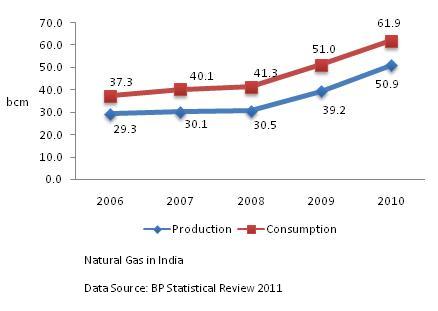 India has been suffering from supply side constraints due to low availability, insufficient transmission & storage networks. As a result, India depends on imported Liquefied Natural Gas to meet 20% of its demand. Reliance’s discovery of KG-D6 was a game changer and increased domestic production substantially. Natural Gas availability is likely to increase by over 50% by 2013-14.

India’s demand for natural gas will also increase, almost three-fold in the next decade. The pipeline transmission and distribution networks are also improving which will ensure gas supply at reasonable prices. Demand will continue from fertilizer, power and City Gas Distribution.

In effect, supply will still lag demand in the coming decade and the gap is likely to increase by FY20.

Oil & gas reserves in India have significantly increased in the last decade, almost doubling in quantity. India now has 0.8% of the World’s total reserves for both oil and natural gas. 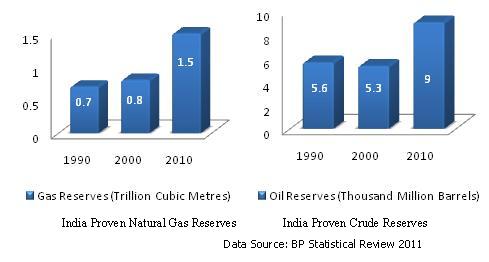 The epicenter of exploration activity is now moving east towards the KG, Mahanadi & Cauvery basins after being dominated by the Mumbai High. The New Exploration & Licensing Policy (NELP) was introduced in 1997 to tap the potential of India’s vast unexplored reserves and to encourage private participation in the exploration process. Nine rounds of NELP have brought in investments of $15 billion and 58% of the total sedimentary area has been explored as against 11% in pre-NELP period.

Despite the success of NELP, India’s vast hydrocarbon potential is located in geographically difficult terrain and deepwater. With a view to attract more foreign capital and innovative technology for exploration, India is looking to move towards Open Acreage Licensing Policy. The key features  of this policy are reliable and quality geo-scientific data will be available and E & P companies are free to bid for blocks at any time of the year.

India’s installed refinery capacity of 185.4 MMT makes it the fifth largest refining hub in the world. The refining sector is dominated by state run oil companies (PSU’s), which refine ~ 61% of India’s total output. After opening up to the private sector, there has been major capacity addition and India is a net exporter of petroleum products. 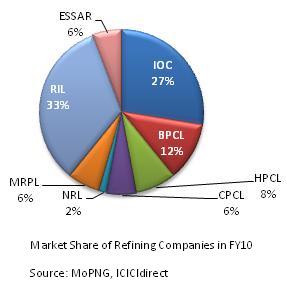 Private sector entry into fuel retailing was not permitted until 2002. However with the rise in international crude prices and with the Indian Government deciding to protect the Indian consumer from high prices, only state owned Oil Marketing Companies were in a position to offer fuel at subsidized rates. 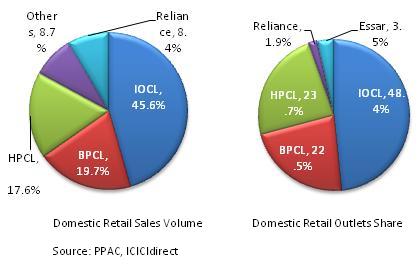 Petrol prices were deregulated last year following the recommendations of the Kirit Parikh Committee, but the Government reviews and intervene periodically. Subsidies still continue for diesel, kerosene and LPG. The under-recoveries for FY12 are expected to be Rs. 120,000 Crore despite recent hikes and this is borne by the Government, upstream PSU’s and OMC’s.

India’s growing demand for energy coupled with huge dependence on Middle East countries has forced India to revive its economic ties with Russia, which in Soviet era used to satisfy one fourth of India’s oil demand. ONGC Videsh Ltd is already in talks with AFK Sistema to acquire a 25% stake which will give it access to large oilfields in Russia.

On the other hand, Russia, which produces 11.5% of Global Primary Energy, has been supplying oil to European countries but with fears of sovereign debt looming large over Europe, is also looking for other buyers. Russian firm Gazprom is already looking to finalize sell agreements with India, Korea and China.

Petroleum products are also likely to be more closely linked to crude prices but tax structure needs to be streamlined and direct cash transfer will help private players enter retail space. PSU’s have low refining margins but are hoping to export petroleum products to improve profitability.

Proactive government action seems to be a distant dream if one looks at the Cairn-Vedanta deal which was approved with punitive riders after dillydallying for 10 months. Also the Cabinet Committee on Economic Affairs has suggested approval for RIL’s proposed sale of stake to BP in 21 blocks instead of 23. Decisions like this can turn out to be detrimental for coveted foreign investment in this sector.

The Oil & Gas industry in India is at the most critical cusp of its journey. Significant reserves have been discovered and India is positioning itself as a major refining hub following Singapore’s model. The last decade has been the best in India’s hydrocarbon history but a lot more is desired to satisfy our exponential energy needs. Pipeline infrastructure, taxation structure for petroleum products and natural gas supply need immediate addressing. We need more regulatory clarity on fuel pricing and exploration of reserves to truly pave the way for private and foreign participation. With growing inflation, widening fiscal deficit and ballooning import bill becoming a cause for concern, oil and gas sector is where all the answers have to come from.

This article has been co-authored by K Abhinay, Tofik Shaikh and Varun Salwan from NMIMS