Kodak marketing strategy helps the brand/company to position itself competitively in the market and achieve its business goals & objectives.

The product strategy and mix in Kodak marketing strategy can be explained as follows:

Kodak is a leading brand which focuses on digital cameras, printer, imaging deivces etc. There is a wide range of product offerings in the marketing mix of the company. Kodak currently provides products in the form of digital printing and enterprise which includes inkjet printers, electrographic printing equipment and its related accessories. Flexcel is the product utilised for flexography printing. Kodak offers digital printing solutions in terms of web press feeds, commercial printing systems like Prosper, VersaMark and commercial sheet feeds. Kodak has also ventured into the digital camera market due to rising competition from 2000. Some of the flagship products within this segment includes Kodak DC series, Kodak Easy Share Series, Kodak DVC series, Kodak PalmPix Series and digital camera accessories. The major product share of Kodak once included the photographic films which currently has very lower demand due to rising prominence of digital photography technology. Kodak is also involved in the manufacturing of some of the medical diagnostic equipment which include medical imaging, X-ray film, Digital Radiography, Medical Printing, Oncology imaging and Dental imaging. 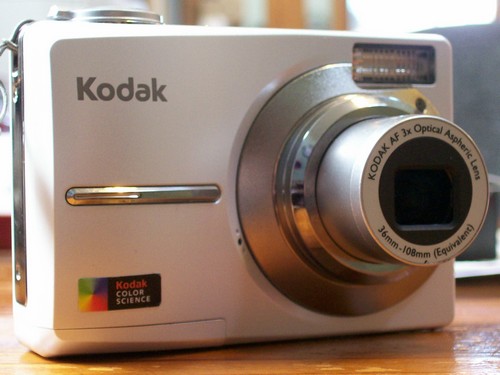 Kodak has always been a leader when in comes to pricing, which is done with competition in mind.

One of the major strategy implemented in terms of pricing has been razor and blade for its printers wherein the prices of the printer has been higher but the ink for the cartridge has been lower. The prices of the printer has been higher compared to its competitors but has been keenly persuading lower prices for its important accessory ink cartridge. Kodak after venturing into digital photography segment have always been market follower due to increased competition by established players in the same sector. Generally Kodak has adopted multipoint pricing strategy in its marketing mix wherein the price in one market may impact the rivals in the other market which is primarily Fuji. Some of the premium products have been placed at higher pricing to retain its brand value.

Following is the distribution strategy in the Kodak marketing mix:

Kodak has a very strong distribution network across the globe and has a very distinctive bran image due to its popularity in photographic segment. There are wide number of top retailers and distributors for Kodak products which also includes the niche market of typical printers and films. The other major area wherein the Kodak has utilized for selling its products include the ecommerce and online website. This has proved beneficial for the brand which has brought in turnaround in the strategy for past two decades.

Kodak is also aiming to grow in some of the emerging markets like China and India which is expected to show increased demand for digital cameras and printers due to increased consumption of consumer electronic goods and appliances.

Kodak brand has huge popularity for its photography related products and has used this effectively in various campaigns, promotion and advertisement. The organization has used all forms of media foe effectively communicating its promotional advertisement. The major target for its digital technology photography has been mainly the youth and photography enthusiasts. For its “So Kodak” campaign it has engaged various hip hop artists who have large fan following base. Social media platform has been clearly used for reaching its target customers effectively. This is evident from various campaigns like “So Kodak”, “Its Tie for You and Kodak” etc. This kind of promotional feature has been designed keeping the large B2B markets in picture. It has greater external visibility by associating with various film festivals and award functions thereby enabling the brand to leverage its position with greater awareness among the customers. Hence this concludes the marketing mix of Kodak.

Kodak is one of the most famous and oldest erstwhile technology company that is involved in aspects of photography, digital imaging and mobile devices. Founded by George Eastman and Henry A Strong the company was a dominant leader in 20th century in terms of photographic film. The Kodak company based in Rochester, New York is presently involved in Print systems, enterprise inkjet system, micro 3D printing, packaging and software solution. Kodak which grow in terms of photographic film market however failed to implement digital technologies in the 90’s and hence faced huge losses and filed for bankruptcy in 2012.

The company had a turnover strategy in which they have started focusing in developing competence in terms of digital technology. Kodak is currently having a stiff competition in all the product segments and needs to innovate for differentiation to move ahead in market share.