Marketing Strategy of Coca Cola analyses the brand with the marketing mix framework which covers the 4Ps (Product, Price, Place, Promotion). There are several marketing strategies like product innovation, pricing approach, promotion planning etc. These business strategies, based on Coca Cola marketing mix, help the brand succeed in the market.

Coca Cola marketing strategy helps the brand/company to position itself competitively in the market and achieve its business goals & objectives.

The product strategy and mix in Coca Cola marketing strategy can be explained as follows:

Coca Cola products are sold in various packaging and sizes. For example, its core product Coke is sold in 200ml, 500ml, 1ltr, 1.5ltt and 2ltr bottles in cans, glass and plastic bottles. The Coca Cola logo is clearly made visible on each of these bottles and cans to differentiate itself from Coke. The Coca Cola bottles also have unique shapes pertaining to the brand. Also within the flagship brand, Coca Cola clearly gives various options like classic, diet, light, zero sugar options so that customers can easily identify the product. Coca Cola, Sprite and Fanta have large market shares in their respective segments but their growth is almost stagnant. Hence they generate huge cash for the company. Minute maid has high market share and good growth rate. 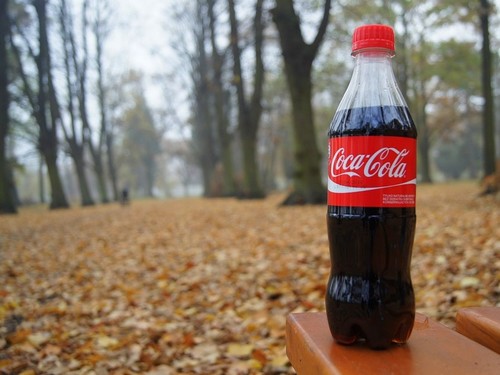 In the sense they charge different prices for products in different segments. The beverage market is considered to be an oligopoly in which there are few sellers and many buyers. Coca Cola and Pepsi are the dominant players. Coke products are priced similar to that of Pepsi products in that particular segment. If Coke prices its products too high as compared to Pepsi in a particular segment, then the consumers might switch especially in developing countries where the consumers are price sensitive. Hence both come to an agreement of maintaining price parity in each segment. However, Coca Cola offers discounts on bulk purchases by sometimes even bundling the products.

Following is the distribution strategy in the Coca Cola marketing mix:

Coca Cola being in the market for more than 130 years and operating in more than 200 countries worldwide, it has developed excessive distribution network. The wide distribution network highlights the place strategy in Coca Cola marketing mix. The Coca Cola company produces the beverage using its secret formula and transports it to the bottlers located in various parts of the globe. The bottle shapes and sizes are predefined by the company. The bottlers then fill the bottles with the adequate beverage and then ship it to the carrying and forwarding agents. From there the bottles are transported by road to the stockists, then to the distributors and finally to the retailers from where the final consumers buy the products. Most of the times the goods from the distributor are transported to the wholesalers who distributes these to the retails according to the demand on regular basis. Coca Cola has an extensive distribution channel and its products are available in almost all retail outlets and supermarkets across the globe. In India Coca Cola products are made available across 2.5 million outlets.

Coca Cola products are also distributed to various Hotels and restaurant chains throughout the world.

Coke has also built an extensive reverse supply chain where they collect the leftover glass bottles from the retailers and convert them into a reusable product thus saving cost and additional resources.

Coca Cola sets the bench mark for advertising and branding. The promotional strategy of Coca Cola focuses on aggressive marketing through ad campaigns using media like TV, online ads, print media, sponsorships etc. Coca Cola engages in the following major sponsorship events like American Idol, BET Network, NASCAR, NBA, NCAA, Olympic Games, FIFA worldcup etc. Coca Cola also launches TV advertisements in various national languages across the globe. In India in March 2016, Coca Cola launched “Taste the Feeling” Campaign which seeks out to remind its customers about the joyous and happy moments Coke brings to their lives. He was chosen so as to connect well with the Indian youth. The ads were telecasted frequently across various channels. Coca Cola has become a mass product which is expected to be available everywhere at any time. This gives opportunity to Coca Cola to increase its business and keep it stable as well.

Special incentives are given to the distributors and retailers for pushing Coke products. Also these retailers are given refrigerators and Coca Cola hoardings for advertising the brand. At supermarkets, special emphasis is given on the shelf spaces to generate more visibility of its products. Coca Cola also engages in various CSR activities to help support environmental and social issues across the globe. Hence, all these points give an overview on Coca Cola marketing mix.

Coca Cola is a carbonated soft drink produced by Coca Cola company. It has a diverse product portfolio in the beverage industry. Coca Cola was founded in May,1886.

Its revenue in 2015 was 44.29 Billion dollars. Its major competitive rival is Pepsi Co.