Marketing Strategy of Jeep analyses the brand with the marketing mix framework which covers the 4Ps (Product, Price, Place, Promotion). There are several marketing strategies like product innovation, pricing approach, promotion planning etc. These business strategies, based on Jeep marketing mix, help the brand succeed in the market.

Jeep marketing strategy helps the brand/company to position itself competitively in the market and achieve its business goals & objectives.

The product strategy and mix in Jeep marketing strategy can be explained as follows:

Jeep started its journey at the time of World War II by providing heroic and robust models for military purpose. This was the time when Jeep gained its recognition. 1950s and 1960s was the era of introducing new Jeep models which serve the purpose of work, play, recreation and luxury. Jeep introduced its first 2-door sporty SUV, Cherokee in 1974 which won Four Wheeler Magazine's "Achievement Award". Introducing Cherokee was a revolutionary step in the area of SUVs. Jeep introduced its first compact 4-door SUV with XJ series. The new Jeep Grand Cherokee (ZJ) and super-capable Wrangler (TJ) introduced in 1990s, established a new benchmark in 4 wheeler market. In 1999, the new Grand Cherokee (WJ) was introduced and made sales grow to 620,000+ units for that decade. Jeep’s Wrangler variant, Wrangler Unlimited provided ample storage space, comfort, convenience and technological advancements all at the same time with robust looks and created a new milestone in the market. In 2006, Compass and Patriot were launched, first Jeep vehicles for the small cross-utility segment. An All-New redesigned Grand Cherokee was launched with latest styles cues and a new 3.0L EcoDiesel engine. And in 2015, the Jeep brand entered the small SUV market with the Renegade as its new marketing mix product offering. Below is the list of all the models which are being offered by Jeep:

More than 1.4 million Jeep models were sold in 2016. All the models depict the main philosophy of Jeep “Freedom, Adventure, Authenticity and Passion”. 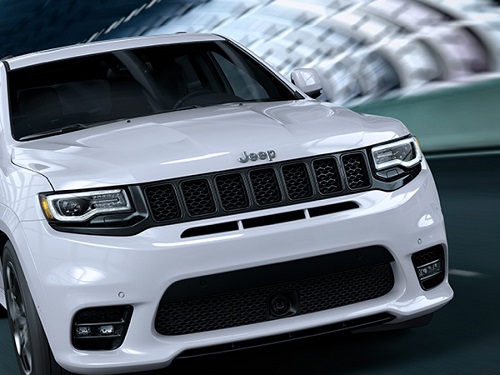 Jeep products cater to the need of the people who are looking for a luxurious as well as sturdy SUV.

There are many players in this area giving a tough competition to Jeep like Hyundai Creta, Mahindra XUV 500 and Mahindra TUV 300 etc., to keep the pricing of the models at par with the competitors; Jeep has adopted the strategy of competitive pricing. This strategy is generally used when there are multiple players in the market offering almost similar products.

Following is the distribution strategy in the Jeep marketing mix:

Jeep started from United States and now has spread globally. Jeep models are present in Asia Pacific, Middle East, Europe, Africa, America and Caribbean, which shows its strong distribution strategy in it marketing mix. Along with the spread in the selling market, Jeep focused on localizing the production plants as well. Earlier the models were manufactured only in US but lately the assembling and production started in other 4 continents as well. A factory in Italy was made for Jeep Renegade in 2014, a factory in Brazil began making the Renegade in earlier 2015 and a production plant for the Cherokee was started in China by the end 2015. Fiat Chrysler Automobiles rolled out its first locally manufactured Jeep Compass in India from Ranjangaon facility in Pune, in June 2017. Fiat invested US $280 million to support local production of Jeep in India. Also, this is the only plant which rolls out the right hand drive Jeep models. All these newly established manufacturing units increased the yearly capacity by 550,000+ within a span of one and half years. Jeep has distribution centers and sales of mass market in Pacific region India, China, Japan, South Korea and United States, Mexico, Canada and Caribbean.

Jeep believes in aggressive marketing and provided best advertisements depicting the roughness and adventure philosophy that Jeep believes in. Jeep has used the channels of mass promotions like Television, print media and magazines. In 2015, Jeep brand launched model “Renegade” in North America through an innovative music platform with KIDinaKORNER/Interscope Records. One 60-second commercial, "Renegades," was also aired across television, which was built around the original song "Renegades" by the Brooklyn indie rock band X Ambassadors. In 2016, on completion of 75 years, jeep launched a campaign “My Jeep Story” and encouraged its customers to share their favorite Jeep moments on Twitter, Instagram and Facebook using the hashtag #myjeepstory. Hence this concludes the Jeep marketing mix.

Jeep, founded in 1941, one of the oldest and well established automobile brand is known all over the world for its robust and adventurous SUVs.

The brand was acquired by Fiat Chrysler Automobiles (FCA) in 1987. Jeep, the most profitable and valuable brand for FCA, completed its 75 years in 2016.