Marketing Strategy of Perodua Cars analyses the brand with the marketing mix framework which covers the 4Ps (Product, Price, Place, Promotion). There are several marketing strategies like product innovation, pricing approach, promotion planning etc. These business strategies, based on Perodua Cars marketing mix, help the brand succeed in the market.

Perodua Cars marketing strategy helps the brand/company to position itself competitively in the market and achieve its business goals & objectives.

The product strategy and mix in Perodua Cars marketing strategy can be explained as follows:

Perodua is one the leading brands of car manufacturers in the world. Perodua launched its first car in the year 1992 called as Perodua Kancil. It went on to produce supermini and mini cars till it decided to compete with its close competitor Proton in the super compact segment and launched Perodua Myvi into the market. There are several variants available as a part of the marketing mix product portfolio. The other models launched by Perodua over the years are Rusa, Kembara, Kenari, Kelisa, Viva, Nautica, Alza, Axia, Bezza and Aruz. 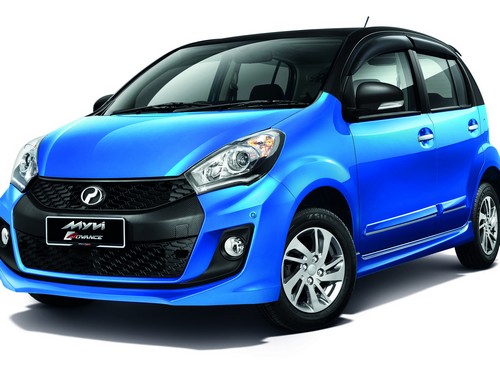 Perodua Cars are known to be both affordable and efficient.

Perodua cars are reasonably priced and hence are much sought after by families and individuals looking for a premium car at affordable price. After sales service is also provided by the company at affordable prices. The company also keeps in mind the offerings and prices given by competing automobile brands.

Following is the distribution strategy in the Perodua Cars marketing mix:

Perodua is headquartered at Sungai Choh, Rawang, Malaysia and is its main markets consists of Malaysia, Mauritius and Singapore. In places like United Kingdom Proton, Perodua’s chief competitor sold the latter’s cars to attract customers who wished to attract customers who wanted options in lower price ranges. Besides selling in UK and Singapore, Perodua also exports to countries like Brunei, Malaysia, Cyprus, Sri Lanka, Malta, Nigeria, Egypt, Lebanon, Qatar, Senegal, Saudi Arabia, Syria, Fiji, Nepal and the Republic of Ireland. The company has 182 sales branches and 202 service branches all over Malaysia.

Perocom is the sole distributor for Perodua cars and is known for its excellent customer service.

The Perusahaan Otomobil Kedua Sendirian Berhad (Second Automobile Manufacturer Private Limited) commonly known as Perodua in short, was established in the year 1993 as a joint venture between Malaysian and Japanese company. Perodua is the largest automobile manufacturer in Malaysia. Initially, Perodua produced only minicars and supermini cars and unveiled its first car in the year 1994 called as Perodua Kancil. Perodua has the capacity to produce 350,000 units of cars per annum and over 10,000 employees. Perodua’s logo has a P and the number 2 embossed on it.

The new corporate logo was officially launched on August 1998 with the launch of Malaysia’s first 4x4 car, Perodua Kembara. Perodua lives up to its slogan of “Building cars, People first” and offers great products and services to its customers across the world.