Marketing Strategy of Novo Nordisk analyses the brand with the marketing mix framework which covers the 4Ps (Product, Price, Place, Promotion). There are several marketing strategies like product innovation, pricing approach, promotion planning etc. These business strategies, based on Novo Nordisk marketing mix, help the brand succeed in the market.

Novo Nordisk marketing strategy helps the brand/company to position itself competitively in the market and achieve its business goals & objectives.

The product strategy and mix in Novo Nordisk marketing strategy can be explained as follows:

Novo Nordisk is known for manufacturing and offering pharmaceutical products and services especially related to diabetes like diabetes related medicines and instruments. Diabetes treatment accounts for 85% of the business of Novo Nordisk. Apart from that the company also provides services for the treatment of obesity, haemophilia, growth disorders, and hormone replacement therapy. In addition to making several medicines the company also works with doctors and patients to develop products that would help people manage and monitor diabetes by themselves. One of the iconic products from this company is Novo Nordisk pen which is a reusable pen with one-time disposable needle and insulin cartridge which a user can use to self-administer insulin in his/her body. 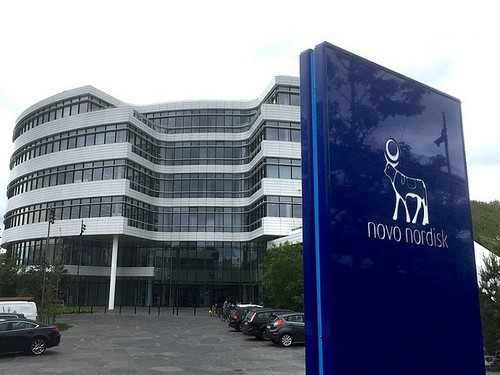 A lot of research goes into the production and development of the products offered by Novo Nordisk which undoubtedly leads to a high price.

But the company always aims to offer its products to patients at an affordable rate. For this is it follows certain schemes to reduce the out of pocket costs for customers. Novo Nordisk has an insurance policy under which the patients can get insulin injection at a minimum co-pay of $1. On top of this the company also give rebates and discounts and offers its product at the lowest possible net price to those without an insurance cover.

Following is the distribution strategy in the Novo Nordisk marketing mix:

Novo Nordisk has its headquarters in Denmark with over 40,000 employees and presence in 70+ countries. It has its production facilities in 8 countries and offices in 75 countries. The company also markets its products in more than 170 countries.

Novo Nordisk is renowned for its stand in combating diabetes, its philanthropism, and is known to be socially responsible. In 2010 it was ranked 25th in a list of 100 Best Companies to Work For by Fortune magazine. In 2014 it was named the most sustainable companies by Corporate Knights business magazine. Novo Nordisk also founded the World Diabetes foundation to help those affected by diabetes in developing countries and is the only organisation of its kind apart from the ones for HIV/AIDS to exist in the world. Novo Nordisk is known to have supported a motion in the UN to fight diabetes and is also the sponsor for the International Diabetes Federation's Unite for Diabetes campaign. In 2014 Novo Nordisk launched a campaign called ‘Cities Changing Diabetes,’ to combat diabetes among the urban population. The company has also known to champion famous sportsperson with diabetes like Charlie Kimball in auto racing and its own team - Team Novo Nordisk in road cycling. This concludes the marketing mix of Novo Nordisk.

Novo Nordisk is a Danish pharmaceutical company that is renowned for developing and advancing medicines for diabetes and the treatment of diabetes for 90 years. The history of Novo Nordisk dates to the year 1923 when two Canadian scientists won the Nobel prize for the discovery of insulin. Taking up this idea August Krogh, a professor at the university of Copenhagen and a Nobel laureate got a permission to manufacture insulin as a medicine. This led to the foundation of Nordisk Insulinlaboratorium by August Krogh, August Kongsted and Hans Christian Hagedorn for the development and manufacturing of insulin. An unusual turn of events happened in the year 1924 when Hans Christian Hagedorn fired one of his most trusted employees, Thorvald Pedersen. Thorvald who was a pharmacist and a chemist along with his brother Harald Pedersen established their own insulin producing company in the year 1925 named as Novo Terapeutisk Laboratorium. This led to decades of rivalry between the two companies each vying for the Danish market share and each having its own strengths and weakness in the business of producing insulin. In the mid-1980s the companies merged to form Novo Nordisk that we know today.

Novo Nordisk has more than 40,000 employees globally and an Egyptian Apis bull can be seen its logo. Novo Nordisk is also a permanent member of the European Federation of Pharmaceutical Industries and Associations (EFPIA).