China Merchants Bank marketing strategy helps the brand/company to position itself competitively in the market and achieve its business goals & objectives.

The product strategy and mix in China Merchants Bank marketing strategy can be explained as follows: 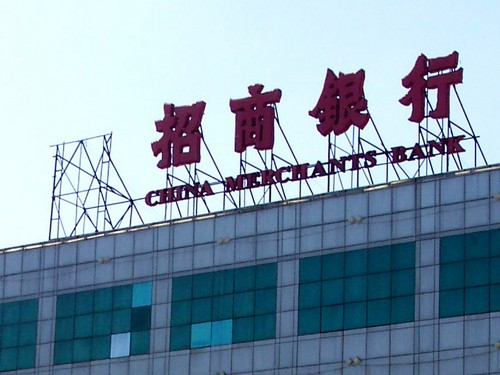 Below is the pricing strategy in China Merchants Bank marketing strategy:

China Merchants Bank strategy of prices has to go in line with what other public sector banks are doing under the regulation of the government China Merchants Bank It also has to keep it charges & prices in its marketing mix competitive to attract customers.

The service charges although vary for various products and the customers keeping good and frequent transaction records are given preference as well as may charges are waived for the same customers. Also to promote the lower income segments to use it minimum services and loans CMB has nil charges for the same. The SME loans interest is kept low to promote the sectors. These have interest rate as low as 4.35% annually for a period of 1 year and these rate may vary depending upon the period for which loan has been taken. Also the annual charges for accounts differ with the quantum of services the customer uses. The more premium services the China Merchants Bank customer utilizes the more he/ she is charged. But then again if he is loyal and is meets a minimum number of transactions and purchases charges may be waived off.

Following is the distribution strategy in the China Merchants Bank marketing mix:

China Merchants Bank has currently 800 branches across China and a total asset for size more than 2.6 trillion yuan and a net capital of over 140 billion yuan. CMB employs more than 50,000 employees for serving its customers. China Merchants Bank has got its subsidiaries in Mainland china where the bank has 12 direct branches, 32 tier I branches and 50 tier II branches. CMB has also got two overseas branches in Hong Kong and New York city. The branch opened in New York has boosted CMB plan for international growth after it got approval from federal in US. It also reaches to the customers through its mobile banking platform, internet banking as well as through SMS banking and mobile apps.

China Merchants Bank also has one credit card centre, one loan centre for small and medium enterprises and more than 1600 self service banks all over China.

China Merchants Bank to educate its customers mainly uses the print media as well the branch premises. Even the employees are engaged to make aware of the products. It also has very focused advertisements which targets segments. CMB has also featured in various programs which has raised the reputation of the bank and also the trust among the customers. China Merchants Bank also has various loyalty programs and Merchants tie ups which it uses for promotions to attract customers. It also uses its website as well as the SMSs through which it reiterates is brand and also the various schemes it releases in regular intervals. China Merchants Bank also has various CSR activities such as setting up vocational training institutes, donations, imparting financial literacy to many people through financial literacy centres.

Since this is a service marketing brand, here are the other three Ps to make it the 7Ps marketing mix of China Merchants Bank.

China Merchants Bank believes in upgrading to the latest technology and expanding its reach year by year. It currently has more than 50000 employees. The selection of the employees happens through the China’s national entrance test and then they go through training at the end of which they are put into clerical and probationary officer roles. The China Merchants Bank employees also go through the timely trainings and presentations and circulars to keep themselves updated to the current technologies and banking practices. China Merchants Bank has a very detailed structure in the organisation for the employees to chalk out the career goals and give them the boost to work harder every time.

The processes of China Merchants Bank are quite exhaustive and as per government guidelines. Due to this fraudulent cases and errors are quite less in the bank. With the help of IT systems the bank is now able to provide very quick service to its customers and make its customer happy. As compare to the past now with innovation and automation in various processes CMB has been able to complete account opening loan approval and other services within a three days which earlier used to take a lot of time. There are also instant loan approvals for housing and car loans. China Merchants Bank has also made many of its processes online and on phone so that customer can access them at his convenience rather than going to the branches to get serviced. China Merchants Bank also has multiple dedicated counters and also reception areas so that customers can easily get serviced in a speedier manner

CMB is also credited of being the first bank to use bank-wide IT services, also China Merchants Bank is known as the first telephone bank in China. CMB is also the first one to provide real time funds transfer services in China.