British Airways marketing strategy helps the brand/company to position itself competitively in the market and achieve its business goals & objectives.

The product strategy and mix in British Airways marketing strategy can be explained as follows:

British Airways is the flagship airline carrier based out of UK. British Airways offers high quality service to its customers. In simple words it is offering transport of people from one place to another by flight as a part of its marketing mix product & service strategy. The British Airways fleet consists of Boeing 777s, 787s and 747s which offer an array of inflight services. The services offered are integrated with the latest technology. The flight tickets are for different classes namely economy, business, premium economy and first class. Entertainment screens, beds, cabins, extra space, main meal courses are offered and the services become more and more sophisticated and luxurious with the betterment of travel class. The services are also differentiated into long haul and short haul i.e. the duration of the flights. 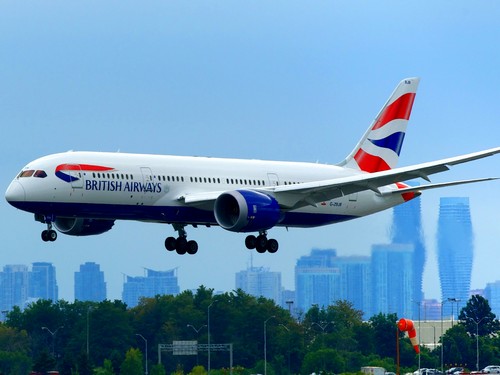 British Airways has the main aim that everybody should be able to afford the ticket prices and hence has the policy of pricing that provides a reasonable value to the customers.

The tickets are for different classes namely economy, business and premium economy. The prices vary according to destinations and if booked early can be much more affordable. Thus, it is a differentiation pricing strategy. British Airways also offers discounts for customers having frequent flier miles and in periods of festivals like Christmas. The increasing fuel prices have put pressure on the airlines and hence they need to ensure that they are earning a sizable profit for efficient functioning.

Following is the distribution strategy in the British Airways marketing mix:

British Airways serves to more than 400 destinations with a fleet of 273 aircraft which include Boeing 747s,777s and 787s. The head office of British Airways is in Waterside near London Heathrow airport. The airline has around 40% of the slots at the Heathrow airport and is the most operational there. It has also tied up with airport authorities of the world’s airports to conduct smooth operations. The way the services are distributed are through websites and the phone app.

Everything right from arrival departure timings to the flight features and other services can be checked through the website.

The airline industry is hyper competitive and hence brands need to ensure that they follow the right strategy for promotion. British Airways advertises through TV advertisements, billboards and newspapers. The promotions are very classy and have sophistication as the message which highlights them. Since most customers find it convenient to book tickets online they have their website as well as a mobile app. British Airways were airline partners for the London Paralympic and Olympic games in 2012. They have had brand ambassadors like golfer Justin Rose. They also sponsor other sporting, charitable and cultural events around the globe. British Airways also have promoted their brand through films like “Planes”.

Since this is a service marketing brand, here are the other three Ps to make it the 7Ps marketing mix of British Airways.

Willie Walsh is the company CEO who is the head of the management teams. This is followed by management board which consists of strategy, engineering, sales and marketing, customer and finance units. There is a customer and operations team which includes flight operations, communications, engineering executive, customer management and operations team. Other departments are legal, investments and safety. British Airways has a total of 40000 employees which includes 15000 cabin crew 3600 pilots and 5500 engineers. The pilots undergo tough tests and simulations for selection and induction into the organization. The cabin crew too is recruited from the top hospitality institutes and undergo rigorous training once inducted into the organization.

British Airways has launched a new ticketing service called e-ticketing because of which the time taken to book tickets has become only one minute. This has been made available in only Britain and Germany. It has also launched British Airways Holiday which offers nine types of holiday packages. It also has a cargo service which offers delivery for dangerous or perishable goods, pets, funerals and scheduled services. The process in simple terms starts right from the booking of tickets and goes through various phases like arriving at the airport, getting the boarding pass, checking in the luggage, entering the flight, utilizing and experiencing the services offered inflight and getting the luggage back.

For British Airways it is all about the experience that they have to offer to their customers and also the way the customers perceive the brand. This is the intangible aspect of the business. Hence it is the way the service is being offered for example in this case the way the lounges are designed, the behavior of the attendants on flight, the design of the cabin, interiors of the flight, ambience of the fight, sophistication in the symbol of British Airways and the colors used in it all form the physical evidence. This completes the British Airways marketing mix.

British Airways is currently the largest in the United Kingdom having a fleet size of 273 and flying to more than 400 destinations. It is a leading airline and has set high standards of service in the market.