Marketing Strategy of Legoland analyses the brand with the marketing mix framework which covers the 4Ps (Product, Price, Place, Promotion). There are several marketing strategies like product innovation, pricing approach, promotion planning etc. These business strategies, based on Legoland marketing mix, help the brand succeed in the market.

Legoland marketing strategy helps the brand/company to position itself competitively in the market and achieve its business goals & objectives.

The product strategy and mix in Legoland marketing strategy can be explained as follows:

Legoland is a theme park based on popular block toys Lego. Legoland seems to be attracting kids who are young at age. They grow fond of playing with Lego building blocks and this makes them want to go to Lego themed parks. These parks offer a lot many activities which are not only fun for the kids but also are a source of entertainment for their parents and accompanies with the kids. The services they offer as a part of their marketing mix product portfolio are roller coasters, water parks, food stalls, shops etc. But all the rides are made children friendly. The Legolands have a miniland where there is a construction of a whole village made up of Lego bricks. One side of the parks features famous monuments and landmarks across the globe also made up of Lego bricks. There are theatres inside the park which hold shows based on various themes. In addition to Lego theme, some parks such as Legoland Dubai have Smurfs village which showcases a world of Smurfs. 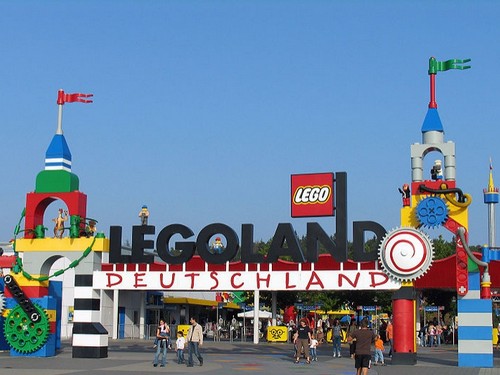 The pricing of these Legoland parks are kept high.

Per person it costs about 95 US Dollars to 120 US Dollars. There is also availability if resorts for staying which also have premium pricing. These theme parks try to level themselves with the similar parks like Disneyland, there by offering such pricing.

Following is the distribution strategy in the Legoland marketing mix:

There are 7 Legoland theme parks around the world. They are spread across contents in places such as USA, Europe and then UAE, Malaysia and Japan. These theme parks are named accordingly, Such as Legoland Billund, Deutschland, Windsor, Dubai, Japan and American Lego lands such as Legoland Florida and Legoland California.

With growing success, they have also planned for expansion in Shanghai and South Korea.

Legoland promotes itself quite extensively. The promotion of these big theme parks is only done for invitations of public. As opening of these massive parks are self-promotional. The pricing discounts on special occasions are done to lure people aiming for festival getaways. Many times, there are Luck draw contests and several competitions held offering tickets as the rewards for winning making them an attraction for contestants.

Since this is a service marketing brand, here are the other three Ps to make it the 7Ps marketing mix of Legoland.

Legoland is owned and operated by Merlin Entertainments which is a British company. There are a number of employees who work at these parks. The employees are dressed up according to the theme and many are hired to roam as characters from popular cartoon shows. Special care is taken for operating the rides with kids, sit there are always instructors appointed who are found sitting along the kids in their rides ensuring their safety.

Legoland parks have several different sections which operate simultaneously. This includes a Miniland which features a small park containing all the Lego made buildings and structures representing a small town, a kids play section, theatres and shopping. The families are invited to go by these places gradually leading them to enjoy everything in a single day.

Legoland since its opening has always been a source of buzz. With children who play with Lego all day, they are bound to make a wish to go to such theme parks. Lego toys are available at all stores, so these add up to the whole system of driving them to the park. While these parks attract people inside the city but is still to attract attention for people faraway so as to travel distances to these parks as they do in case of Disneyland. They have their merchandise sold at many stores which also are popular among kids. This completes the marketing mix of Legoland.

Legoland is a theme park company. They have a chain of theme parks at several places over the world.

They are primarily focused on making a fun outing day for families as a package. Rides, attractive shows, themed buildings are all carefully made so as to represent the primary building material that is the Lego brick.