Royal Dutch Shell marketing strategy helps the brand/company to position itself competitively in the market and achieve its business goals & objectives.

The product strategy and mix in Royal Dutch Shell marketing strategy can be explained as follows:

2) Integrated Gas and New Energies – natural gas is cooled to provide liquefied natural gas (LNG) which is shipped to market and gas is converted to liquid (GTL).

These products in the marketing mix of Shell are used for domestic, industrial and transport use. Shell produces lubricants which are used for passenger cars, transport vehicles, and industrial machinery in sectors such as power generation mining and manufacturing. The lubricants are also used in construction and agriculture. Lubricants are also used in ships, tankers and small boats. Shell produces aviation fuel which is used in more than 40 countries. Shell LPG is used in retail, commercial as well as industrial uses. A wide variety of chemicals are used which are used in various industries. 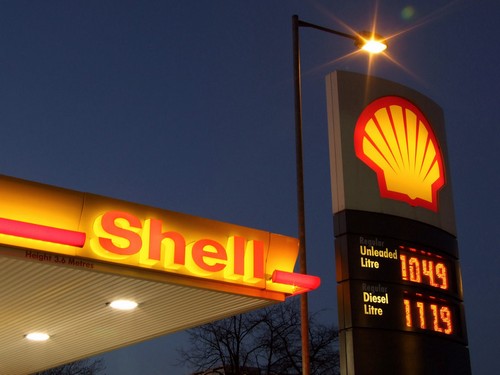 Below is the pricing strategy in Royal Dutch Shell marketing strategy:

The price in the Royal Dutch Shell marketing mix can be understood by the fact that all these products like oil, petrol, diesel, gas etc are commodities.

Oil is a commodity and prices depend on global oil and gas prices. Benchmarks or reference prices for oil effecting Shell are Brent, West Texas Intermediate, Henry Hub, UK National Balancing Point, Japan Customs-cleared Crude. Price depends on production by OPEC countries and global economy. Natural gas prices vary from region to region and depend on production and demand. Prices of refined products also depends on oil and gas prices. Hence, all the products made by Shell are controlled indirectly by the market and government policies.

Following is the distribution strategy in the Royal Dutch Shell marketing mix:

Royal Dutch Shell has a supply and distribution system all over the world enabling it to make deliveries around the globe. It has more than 100 distribution terminals and 770 supply points in around 25 countries. Shell also has a Shell Pipeline Company which transports about 1.5 billion barrels of crude oil and refined products a year through the Gulf of Mexico and US. Shell has 43,000 branded retail stations operating in over 70 countries at the end of 2015.

The company has a Shell V Power brand under which it sells fuel in more than 60 countries.

Shell has a strong brand with a distinctive and recognisable logo which promotes the quality of Shell. Sound of Shell is a unique promotional activity in which Shell has used music in visual and audio communications, including collaborations with renowned singers and composers which promotes the value of the brand. Shell promotes itself as an environment friendly and responsible company. Shell advertises itself on TV, internet, print and hoardings. Shell is also involved in sponsorship deals with companies such as Ferrari and McLaren. Being a leading global player, Shell already has a strong brand presence. Even at the petrol pumps spread across the world, have excellent branding, which help Shell have a strong presence. Hence, this conclude the Royal Dutch Shell marketing mix.

Royal Dutch Shell also known as Shell is a multinational energy and petrochemical company headquartered are in The Hague, the Netherlands. It is one of the supermajors (worlds 7 or 8 largest publicly owned oil and gas companies) and one of the largest in terms of revenue.

Shell operates in more than 70 countries worldwide and among the largest oil company worldwide. Shell is a fully integrated company and one of the leading global companies worldwide.