Marketing Strategy of Nissin Foods analyses the brand with the marketing mix framework which covers the 4Ps (Product, Price, Place, Promotion). There are several marketing strategies like product innovation, pricing approach, promotion planning etc. These business strategies, based on Nissin Foods marketing mix, help the brand succeed in the market.

Nissin Foods marketing strategy helps the brand/company to position itself competitively in the market and achieve its business goals & objectives.

The product strategy and mix in Nissin Foods marketing strategy can be explained as follows:

Nissin Foods is one of the most popular noodles brand in the world. Nissin has cup noodles, Top Ramen (noodles), Bowl Noodles (Hot & Spicy), Chow Mein, Cup Noodles (Homestyle, instant), Souper Meal which is a box of soupy noodles, Raoh (which is a noodle soup), Ramen Bowl, and Bowl Noodles (homestyle and hot & spicy). Nissin noodles come in three varieties as a part of its marketing mix product strategy i.e. Ramen Noodles, Spoonable Noodles and Premium Straight-cut (Flat) Noodles. The Ramen noodles are the original long and squiggly noodles based on the traditional Japanese noodles. Nissin is ideally eaten with the chopsticks by purists. The spoonable noodles are short noodles which are easy to serve and eat, just like instant cup noodles. The Premium straight cut noodles are wider and flatter noodles which look more like pasta. Apart from different types, they are also available in different flavours like Chicken, Shrimp, Spicy and Asian flavours. In India, Nissin have product variants like Masala, Atta, Oats, Curry and Fiery chilli for Top Ramen noodles. Similarly in China, they offer different noodles named under Demae Icho, UFO, Hé wèi dào etc. In America, they have Galinha based soup noodles under Cup noodles brand. 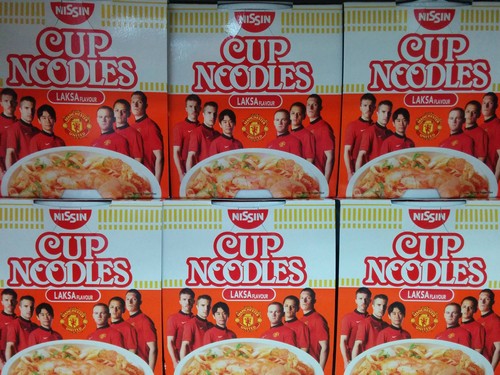 Nissin follows the competitive pricing strategy depending upon its key competitors in different markets.

The top competitors for Nissin are Nestle ltd, Knorr, Simply Asia, Lucky Me, La Choy, and Pot Noodles. Nissin keeps its prices slightly lesser than the competitors in case of similar products. For example, in order to tackle the existing large and loyal customer base of Maggi instant noodles in India, Nissin had to come with more products and keep the prices lower than that of Maggi. Along with that, they rarely offer discounts like buy one get one free. They are constantly gaining customers via their cup noodles product range which is extensively available in shops in all the countries of its presence. Along with these, Nissin has taken care of the local tastes in different countries, like introducing Masala (Spicy) cup noodles in India, beef noodles in EU, seafood noodles in Thailand, Indonesia, Hong Kong, Singapore, and China, Chicken flavour in Brazil and USA.

Following is the distribution strategy in the Nissin Foods marketing mix:

Nissin noodles can be easily bought from retail shops selling grocery and general consumables in almost all parts of the countries. In emerging markets, these noodles are available in organized super markets and retail chain stores. Nissin noodles are extensively present very close to the consumers, and can be bought easily. The cup noodles brand from Nissin has been able to penetrate the colleges, offices and other canteens in buildings. Along with these super markets, the noodles can also be bought from many e-tailing sites like amazon, Flipkart and Ebay. Nissin also tie up with regional players in markets to increase the reach. They place their products along with other products of similar category in the shelf in these supermarkets. They have a strong distribution network to ensure its presence in large number of stores in all the locations.

Nissin have also been able to reach a large portion of rural market in developing countries.

Nissin noodles are promoted with the help of Television commercials especially on Kids’ channels. Apart from that, they have launched some innovative campaigns in its Japanese market for the launch of some new products. For example, Nissin offered the price of a life sized cow, which dispensed warm water on manual milking, to one top ramen fan on the launch of its product ‘Milk Seafood Noodle’. They also joined up with Final Fantasy XV to promote their cup noodles and came up with a very creative commercial from the mash-up, named as ‘Cup Noodle XV’. Nissin also came up with their global commercial by taking reference from a classic movie, Seven Samurai using seven extreme sports players, dressed as Samurais doing extreme sports. This video campaign also receive Hollywood’s Walk of Fame for its creativity. In India, Nissin aggressively promoted their product to win a customer base during the controversial period around Maggi noodles. They used print as well as electronic media to reach out as many customers as possible. Nissin promoted their noodles in India using the names like Smoodles, super noodles with vitamins. Hence this completes the marketing mix of Nissin noodles.

Nissin is a Japanese company established in 1948, which is known for being the first company to make instant noodles. It is also the oldest and largest manufacturer of instant noodles in Japan. Nissin foods opened there US subsidiary in 1970 and sold instant noodles under the name of ‘Top Ramen’. Today, along with Japan Nissin is present in different countries like India, Brazil, Hong Kong, Mexico, Europe, Thailand and Vietnam.

Nissin has a long list of successful Ramen products to its portfolio, after the creation of world’s first instant noodles. This article covers the 4 P’s of marketing mix of this company.