Marketing Strategy of Gatorade analyses the brand with the marketing mix framework which covers the 4Ps (Product, Price, Place, Promotion). There are several marketing strategies like product innovation, pricing approach, promotion planning etc. These business strategies, based on Gatorade marketing mix, help the brand succeed in the market.

Gatorade marketing strategy helps the brand/company to position itself competitively in the market and achieve its business goals & objectives.

The product strategy and mix in Gatorade marketing strategy can be explained as follows:

Gatorade is one of the most well-established energy drinks from the house of PepsiCo. Gatorade provides many types of products as opposed to its competitors, Pocari Sweat and Red Bull, which provide only a single product type in its mix. Gatorade provided sports drinks, thirst quenchers, energy and nutrition bars, protein and nutrition shakes etc. It has a series of drinks called the G series which can be consumed based on the time of the activity, i.e., before, after and during. Following are the list of products in its marketing mix available worldwide:

• G Natural – made with natural flavors and ingredients 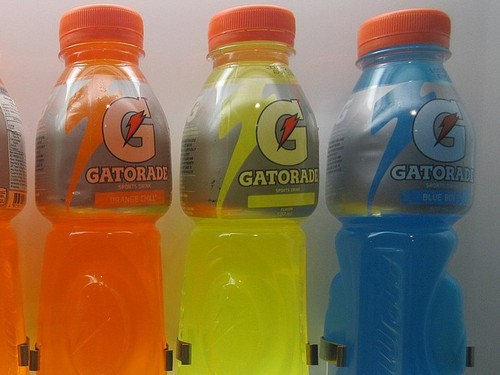 Gatorade is fairly highly priced amongst its competitors but it also has higher popularity.

Gatorade is one of the biggest players in the Sports Drinks market in the world. It used to follow a premium pricing policy in its marketing mix and price its products higher in order to obtain higher margins, but after the entrance of its competitors into the market, Gatorade tried to slash its prices so as to hold on to their position in the market. Prices are determined by taking into account various factors, such as the cost of production, cost of raw materials, cost of labor, packaging, transportation costs etc. But the most important factors remain analyzing the consumer market and understand how much customers are willing to pay for a particular item and for how much has your competitor priced the similar item in their brand. Pricing will also affect the demand. So it is essential to price your product logically. Gatorade also used sales promotions as a means to increase revenue which would aim at repeat purchase later. Gatorade bottles are available at $1 per bottle, but larges packs can also be purchased between $5 to $10 depending upon the number of bottles.

Following is the distribution strategy in the Gatorade marketing mix:

Gatorade is distributed through PepsiCo globally across 80 countries. It is present in supermarkets, malls, convenience stores, drugstores, grocery shops, petrol bunks, vending machines, cafeterias etc. The major market for the drink remains countries like US, Canada, Australia, and the UK. The drinks are delivered through GNC for easy access to Gatorade’s products. The product placement should be done such that it gains more visibility which in turn converts into sales and thus generate revenue for the company. Gatorade used several channels to distribute its products. Some include long-distance truck deliveries, freight, distribution through flights, etc. It also used to provide home delivery service of bulk orders which would be required by sports organizations or schools. The placement was done according to their audience. Since we are considering youth to be our target audience, their products were placed in areas visited mostly by the young and the sports enthusiast crowd like stadiums, sports clubs, sporting events, sports equipment stores etc.

With the growth of ecommerce grocery platforms, the drink can be purchased online which is then delivered to the customer.

Gatorade got its name from the Gator Football team of the University of Florida for whom the energy drink was researched and produced by the researchers in the university. It soon gained popularity and was published in Sports Illustrated and Miami Herald. Like several other brands, Gatorade also ventured into this business for using sports as a medium to promote its product. It was also an official sports drink partner for NFL, NBA, NASCAR, MLB, WNBA, USA Basketball, NHL, Association of Volleyball Professionals, US Soccer Federation, Major League Soccer, High School Sports Teams and the likes. Many players were also included in promoting this sports drink namely, Derek Jeter, Dwight Howard, Mia Hamm, Sidney Crosby, Dwayne Wade, Tiger Woods, Serena Williams, Vince Carter, and Peyton Manning. When it decided to foray into the UK market, it became the official Sports drinks for Chelsea FC. It also used TV ads to promote the drink. “Be like Me” ads which featured North American Basketball Player of Chicago Bulls, Michael Jordan in 1991 when it had won the NBA championship which helped Gatorade build its image further. Hence this concludes the marketing strategy and marketing mix of Gatorade.

Gatorade Company Inc. is an American manufacturer of sports beverages. Founded in 1965 at University of Florida by a team of researchers, was then taken over by Quaker Oats Company in 1987 and by PepsiCo in 2000. Gatorade is meant to be consumed before and after performing physically strenuous activities. Its electrolyte infused concoction helps us to replenish the fluids and rehydrates our system so that we can perform better physically. It enhances our endurance and helps us sustain our energy. It also helps to enhance muscle power, fight fatigue, boost brain level, and improve performance.

This industry is an ever growing industry and Gatorade has several competitors in the market: Pocari Sweat, Powerade, Red Bull etc. It is available worldwide throughout many countries and has a wide reach.