Marketing Strategy of Lego analyses the brand with the marketing mix framework which covers the 4Ps (Product, Price, Place, Promotion). There are several marketing strategies like product innovation, pricing approach, promotion planning etc. These business strategies, based on Lego marketing mix, help the brand succeed in the market.

Lego marketing strategy helps the brand/company to position itself competitively in the market and achieve its business goals & objectives.

The product strategy and mix in Lego marketing strategy can be explained as follows:

Lego is one of the biggest block toy brand in the world. Lego was not just restricted to toys but it also entered a much broader space in the market. It started as a toy manufacturing company but it had also become a great marketer. Following are the products or services in its marketing mix which is offered to all customers:

Lego blocks are the most popular product by the company. These blocks are used to interconnect each other and can be used to construct various shapes, designs etc. The toys have had several themes like space, robots, castle etc. Lego has also offered toys based on popular characters as a part of its physical toys.

Video Games by Lego Media International Limited include Lego Island, Star Wars, Indiana Jones, Batman, and Marvel Superheroes more recent being a game based on The Lego Movie. Board games by Lego Games include some popular games like Minotaurus, Creationary & Ramses Pyramid.

The release of the movies led to the shortage of Lego products in the store as there were huge amounts of pre-orders. Some popular movies released are Lego: The Adventure of Clutch Powers, The Lego Movie, The Lego Batman Movie etc.

There are several theme parks under the Lego Group which are spread across various countries like UK, Denmark, Dubai, Japan, USA etc.

The brand also offers books and magazines like The Ultimate Book, Star Wars etc. A Children’s’ clothing called Legowear offers clothes by Kabooki, a Danish company, under the license from Lego group. It produces clothes for children until the age of twelve. 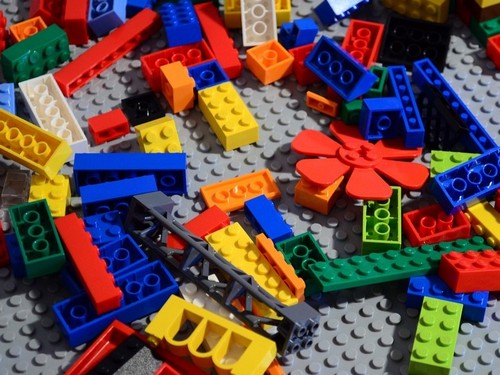 The primary target audience for Lego is children until the age of 12.

It has not yet introduced toys for children below 3 years because the toys may cause a choking hazard. The toys are generally targeted to the kids or middle and upper-class families. Lego toys are not very cheap as a lot of precision and high-quality material goes into the making of such toys. It goes through rigorous tests to qualify to be sold out in the market, which incurs a lot of cost to the company. A slightly premium as well as competitive pricing strategy in its marketing mix is used by the company. It is not priced very heavily also since it wants the customers to be able to afford high-quality toys and the middle-class families would also be able to buy them. It gives great value to the customer so as to gain market share and create repeat purchase. Lego products start at around $10 for block games and can go up to $150 for premium Lego sets. The company has an annual revenue of more than $4 billion.

Following is the distribution strategy in the Lego marketing mix:

Lego is headquartered in Denmark and has its major production units in the UK, US, Singapore, and China. Lego is present in around 130 retail stores around the world, most of which are present in the U.S. Retail stores are not the only places that carry the selection of Lego toys but you can buy them at movie theatres, amusement parks and popular departmental stores and toy stores. The toys are exported throughout the world so that the toys are made more accessible to the people. The toys can also be bought online from several sites such as Amazon, eBay etc.

When Lego was suffering financially, it decided to serve the entire Europe and Asia by opening a distribution centre in Czech Republic, East Europe which was supposed to cut logistics costs by 20 percent.

Lego was made popular not just through the conventional media but also through unique marketing strategies. Lego, when it started off, consisted of just plastic bricks and small figurines which you could use to make small structures. It went further and attached themes to the Lego sets. The themes were an inspiration from cartoons, comics, movies and also video games. Lego expanded much beyond just toys and play. It has an official website which provides items, badges, rank, and trophies for certain tasks. It also had a premium account which had more privileges than the normal account. Apart from that, Lego also came up with the idea of theme parks named Legoland Amusement Park. There are around seven such theme parks around the world. It forayed into movies where an entire movie consists of moving characters made of Lego bricks. There were also competitions held in corporates like “Lego Serious Play” which challenged the creative thinking capabilities of the team members to build a structure which would portray the identity of the company through the Lego structure. In addition to that, there were conventional marketing strategies followed such as Online, TV, and print media. Hence this concludes the Lego marketing strategy and marketing mix.

Lego is a leading plastic toy manufacturer which specializes in construction toys. It is manufactured by The Lego Group, Denmark. It has a flagship product Lego which consists of interlocking plastic blocks and small objects which can be connected to each other and build a structure to your imagination. It can be used to construct buildings, houses, vehicles, human figures. It can be assembled and disperse as many times as one wishes. The legacy started in 1949. It had started off as stackable wooden blocks which then converted to plastic. It became a medium of creative play and enhanced critical learning abilities amongst children.

Lego started producing Lego sets which used to have a specific theme attached to it and the bricks and the figurines designed accordingly. Lego technic was a complex form of the Lego toys which included building complex machinery.