Marketing Strategy of Savlon analyses the brand with the marketing mix framework which covers the 4Ps (Product, Price, Place, Promotion). There are several marketing strategies like product innovation, pricing approach, promotion planning etc. These business strategies, based on Savlon marketing mix, help the brand succeed in the market.

Savlon marketing strategy helps the brand/company to position itself competitively in the market and achieve its business goals & objectives.

The product strategy and mix in Savlon marketing strategy can be explained as follows:

Savlon is an antiseptic brand which is used by doctors and households. Savlon has its products divided into three categories. The product portfolio in its marketing mix is as follows:

Savlon Antiseptic: It is an antiseptic liquid solution dark golden in color which contains centrimide and chlorohexidine gluconate. This is used to disinfect wounds or water for bathing. It comes in 50 ml, 100ml, 200 ml, 500 ml and 1 lit bottles which are transparent.

Savlon Soap: There are three variants in this. First one is the Double Strength soap which is tough on germs and gentle on the skin. The second type is the Glycerin soap for gentle moisturizing and the third one is the Aloe Vera soap which is rich in aloe vera and gives natural moisturizing. The soaps come in 75g and 125 g in packs of three or single. 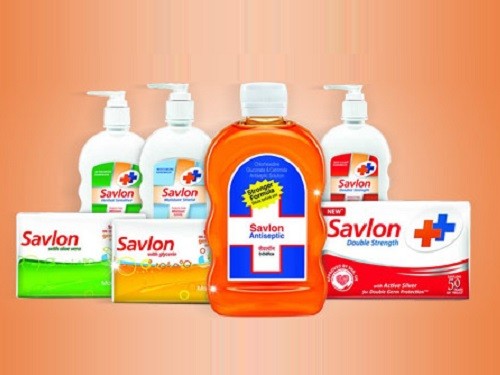 Savlon is priced for the low to mid income level population.

The aim is to increase the penetration in the market as it is being currently dominated by Dettol and hence the pricing strategy in its marketing mix is penetration pricing. The Savlon antiseptic liquid is priced at Rs.34 for 100 ml, Rs.55 for 200 ml and Rs.120 for 500 ml which are all lower than Dettol and other competitors. The price range for the soaps is between Rs.10 and Rs.120 for single and packs of three respectively. There are offers of buy three and get one free on these soaps. Savlon sachets of handwash come for as low as Rs.5 and for the bottles the range is between Rs.75 and Rs.160. Refills are also available for the handpumps at a similar price range.

Following is the distribution strategy in the Savlon marketing mix:

Savlon has a wide distribution network which consists of a lot of distributors. These distributors supply to retail outlets, supermarkets and chemist stores. The SKUs are managed effectively in all these stores by analysis of footfall, area and the competitor brands. Savlon products are also available online on ecommerce platforms like Big-Basket, Amazon etc. There are discounts offered based on the quantities or packs through these portals. People prefer to shop online these days and hence take advantage of these options. The company reduces on SKU losses through because of the online marketplace option. They also give people free samples in malls to disinfect their hands as they go ahead with the shopping thus increasing the awareness. They are also tying up with hospitals for orders where Savlon will be used in the washrooms.

They also plan to tie up with schools for the same.

Savlon markets through traditional channels more. It cuts back on advertisement costs by printing its ads on magazines and newspapers which have a large subscription base. In India, Savlon have ace badminton player Saina Nehwal as their brand ambassador. Through her they promote the need of the product for injuries which happen during practice of not only badminton but any sport and through that they promote in a way such that getting bruised in practice but still not giving up is important to succeed. Savlon also have their digital handles on Facebook and Instagram where they share their campaigns. They have had ‘Haath se Baat’ campaign during the global hand washing day to teach school children importance of washing hands. The ‘Performance Power” campaign to fight germs during monsoon has also been a success. Mostly the campaigns are targeted towards kids as they influence their parents to buy the product. They also have their ‘Swasth India Mission’ to fight germs together by use of Savlon. This concludes the marketing mix of Savlon.

It was later bought by Johnson and Johnson in 1992 followed by ITC in 2015. Savlon is one of the trusted brands and has been there in the Indian market for more than 50 years now because of its loyal customer base and continues to grow further despite tough competition from other brands like Dettol and Lifebuoy.