Marketing Strategy of Angry Birds analyses the brand with the marketing mix framework which covers the 4Ps (Product, Price, Place, Promotion). There are several marketing strategies like product innovation, pricing approach, promotion planning etc. These business strategies, based on Angry Birds marketing mix, help the brand succeed in the market.

Angry Birds marketing strategy helps the brand/company to position itself competitively in the market and achieve its business goals & objectives.

The product strategy and mix in Angry Birds marketing strategy can be explained as follows:

Angry Birds is an extremely popular game, which went on to become a global brand. The brand’s main product is the game itself but apart from that it also has a movie made on it – The Angry Birds Movie and a website which sells Merchandise and other Goodies. The game, goodies, toys etc show its wide offering in its marketing mix product portfolio. The Game has a simplistic design and is quite easy to play with focus on the characters- The protagonists, stylised wingless Angry birds of different sizes, colours and looks with one funny antagonist – a surly green pig in a circle. It is a level-based game where as you proceed the levels get more difficult. Many different versions launched each year. Some of the variants were:

The product category of the Angry Birds game is Android games, iOS games and video games. Its game design includes Slings, Blocks to collide to, Animals as characters- pigs, different birds mainly cardinals, the Northern Cardinal, American Goldfish, etc. It was first launched on iOS then later adapted to other operating services like Android, Windows, etc. Its online store has apparels, toys, collectibles, games, DVDs and different accessories all themed around the characters of the game. 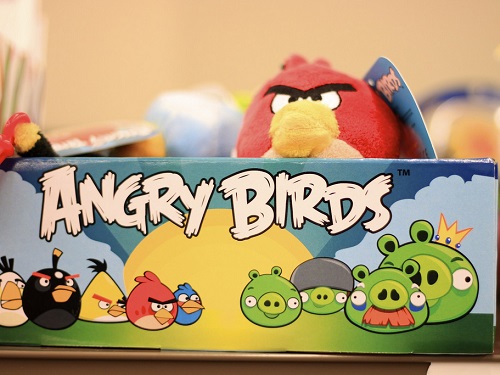 Angry Birds is a free to enjoy game with several in app purchase options.

Many variants of the game are available for free but it has many in-app purchases which are ranged from $2 to $50 which players pay to either level up quicker, buying add-ons, purchase characters, etc. Some variants in iOS are paid versions with charges of 99 cents using psychological pricing. The game also contains ads for the mobile game to gain revenue. It was a market leader in both iOS and Android for the longest time having reached the top spot 300+ times in the Play Store also maintained it for 80 continuous days. it also held the top spot for iOS in the App store in the paid games category for the longest time. In the last 2 years, it has lost a lot of ground to newer more engaging games like Pub G, Clash of Clans, etc. Substantial part of their expenses are for marketing their brand, recently also launched The Angry Birds Movie in 2016. Its main competitors are Temple run, Fruit Ninja, Subway Surfer, Candy Crush, Mine craft, Hill Climb Racing, Fruit master, 8 Ball Pool, Cut the rope, Plants vs. Zombies. The online shop uses psychological pricing and has merchandise ranged from $ 19.99 to $ 39.99, with toys and other products also similarly priced

Following is the distribution strategy in the Angry Birds marketing mix:

Angry Birds was launched first on the iOS App Store as a puzzle game. It has wide-spread reach on social media sites like Facebook. All versions of the game are present on Android and iOS. Only half of the versions of the game are present on Microsoft and PC. The movie, co-produced by Columbia Pictures and Rovio Animation had The Sony Pictures Group as its distributors. With Sony Pictures on board, the movie had a global presence and grossed $350 million globally and become the second highest grossed video game movie and the most successful Finnish movie of all time.

Top earnings for the movie outside America was in China, Russia, UK, Ireland and Germany, showing its wide spread distribution network

Angry Birds has done extremely well in promoting the game and its products. The main target group are iOS users for the game as they tend to spend a lot more on games than android users and also because the game had initially been launched and achieved success here. In their promotional strategy, they first focused on the smaller markets like Sweden, etc. before hitting major markets like USA, UK and China. They used extensive promotion via social media channels like Facebook and Twitter, promotion via other apps, google ads, etc. They also focused on timely communication with users and their feedbacks were typically replied to within a day, with queries answered and issues addressed enhancing its image in the earlier stages. The company released the movie in 2016 with Sony Pictures as distributor which worked well both as a promotional tool and as a revenue generator. It featured in famous ads like the Super Bowl cameo and a Super Bowl themed level. It constantly releases newer versions of its game with themes around recent trends like star wars in Space and similarly other versions. Hence this completes the Angry Birds marketing mix.

Angry Birds was launched in 2009 by Rovio Entertainment Oyj, an Espoo based game developer. Rovio was started in 2003 by students of Helsinki University of Technology after they developed a game when they participated in a game development Competition. After trying their hand at different games they launched Angry Birds, a puzzle game and within 6 months they became the No1 game at the Apple App Store.

The huge success of this game could be attributed to various factors, few of them being that puzzle game are played by one third of all gamers, their stylised character and interesting storyline especially attracted youth who got something fun and could easily relate to the characters, the music and accompanying visuals stood out among their competitors, increasingly challenging levels as the player proceeds. The game further had other developers come in, Chimera Entertainment, Exient Entertainment, Fun labs and Fox Digital Entertainment.