Marketing Strategy of CNBC analyses the brand with the marketing mix framework which covers the 4Ps (Product, Price, Place, Promotion). There are several marketing strategies like product innovation, pricing approach, promotion planning etc. These business strategies, based on CNBC marketing mix, help the brand succeed in the market.

CNBC marketing strategy helps the brand/company to position itself competitively in the market and achieve its business goals & objectives.

The product strategy and mix in CNBC marketing strategy can be explained as follows:

CNBC is one of the most prominent media channels which delivers global news in many countries. In today’s times, in the US where CNBC is primarily dominant, it provides news from morning to night, where it broadcasts a number of analytical reports, documentaries, infomercials etc. The television channel features a continuous flash that provides its viewers real time updates on share prices of companies along with market indices, weather news etc. The top band provides a real time information update on the world commodity prices. Interviews with CEOs and business leaders, business entertainment shows like quiz contests and commentaries by leading financial experts cover a major portion of the broadcast time. CNBC has huge presence in the international markets as well. The news channels & website are the product strategy in its marketing mix. When it comes to India, CNBC operates its business through three channels namely CNBC Tv-18, CNBC Awaaz and CNBC Bazaar. CNBC Tv-18 is a joint venture between CNBC and Television Eighteen India Limited. This is India's first business channel to keep graphics all the time (others need to cut down the bar at the bottom of the screen during ad breaks). CNBC Awaaz is a Hindi business news TV channel in India. 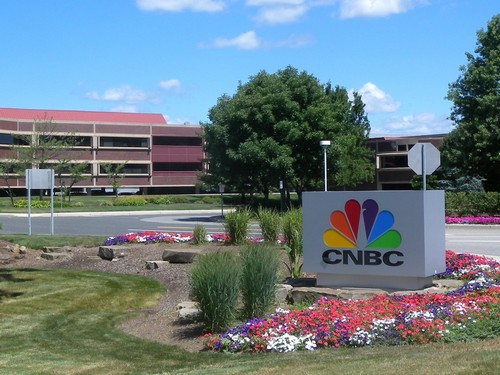 CNBC has a pricing strategy in its marketing mix which is governed a lot by competition.

Prices in the television space when it comes to channels are usually bundled by the DTH provider where in the customer pays a fixed amount for a set of channels that he/she subscribes to. Prices to a great extent are dictated by the popularity of the channels. The popularity is further guided by the ratings associated with the channel. During the first half of the decade, CNBC had a tough time attracting its viewers but post 2005 the channel has seen tremendous improvement. It is estimated that the channel continues to possess the wealthiest audience (in terms of average income) of any television channel in the United States. CNBC has a number of subscription based offerings which charge the viewer separate from the DTH package that is paid for. CNBCplus for example, is a subscription-based service that allows users to have access to 24 hour exclusive feed.

Following is the distribution strategy in the CNBC marketing mix:

Statistics depict that CNBC is available to approximately 90+ million pay television households (80% of households with television) in the United States. In addition to the US offering, CNBC is present in a number of regions across the globe through its localized version offerings which offer content specific to those countries. Furthermore, in the United States, across major airports in the country, CNBC Stores are available that are also called as bureaus.

These bureaus engage in selling limited CNBC merchandise, along with newspapers, magazines and a small selection of drinks and snacks.

CNBC through the past few years has been quick to realize that as television viewing is decreasing, internet usage is increasing throughout the globe. Majority of the initiatives that CNBC is taking henceforth are related to its content improvement across the Internet. CNBC programming is offered more and more in terms of the extension to television viewership, with subscription based services like the CNBC pro. The website is designed carefully to provide the customer with a delightful experience.

Since this is a service marketing brand, here are the other three Ps to make it the 7Ps marketing mix of CNBC.

CNBC boasts of quality content and superior news anchors and agents associated with the network. The loyalty of its customers is further improved by the celebrity financial reporters such as Jim Cramer and Maria Bartiromo. CNBC has two primary types of customers—its Viewership audience (mostly for entertainment purposes) and its potential Sponsorship audiences (day or institutional trader). CNBC has been able to use its strong brand image to make consumers feel comfortable on its website.

CNBC manifests itself through its popularity and spread across television, advertisements, radio, magazines and the internet. More so, it establishes its presence in the form of bureaus or dedicated stores located at US airports. The CNBC peacock logo gives the channel a vibrant, attractive and eye-catching look. It was first used in the 1950s to highlight the network’s entry into colour programming.

CNBC is able to command a market advantage through some of its very popular shows in the US, which include: Street Signs, Worldwide Exchange, Squawk Box, Power Lunch, Closing Bell to name a few. Recently, CNBC has also tried experimenting with non-business programming during prime-time hours like the talk show hosted by Dennis Miller which resulted in moderate success so far.  Majority of CNBC’s revenue is earned through its advertising model. CNBC’s business model is comprised of three segments: advertising, premium internet-based services, and increased reliance on the licensing and distribution of its cutting-edge content to various platform which should be enhanced by its recent alignment with and subsequent integration into the Comcast cable network. Hence this completes the marketing mix of CNBC.

Owned by NBC universal news group, a subsidiary of NBC Universal, major shares of which are held by ComCast, CNBC is an American basic cable, internet and satellite based business news television channel providing its viewers with insights on global market and financial news.

On non-trading days however, it primarily telecasts financial or business-themed documentaries and reality shows. CNBC is headquartered in Englewood cliffs, New Jersey.