Turkish Airlines marketing strategy helps the brand/company to position itself competitively in the market and achieve its business goals & objectives.

The product strategy and mix in Turkish Airlines marketing strategy can be explained as follows:

Turkish Airlines is the flagship airline of Turkey, having its presence at several international destinations. Turkish Airlines promise to offer best of services insight the flight. In recent advertisement, it used the tagline: ‘With THY it’s easy to feel like a star’, thus focusing in the comfort offered. The several service offerings in its marketing mix are as follows. Turkish Cargo are available to transport goods across the globe. A highly efficient tracking system, and the wide range of countries that are covered, makes it a very profitable service for the company.

Turkish Airlines (International): Major travelers through international airlines are business travelers and hence, the first class and Business class is very efficiently managed by THY. THY offers a remarkable hospitality to its customers, for the long journeys.

Turkish Airlines flight academy: Apart from flight services it also offers training to cadets. The Turkish aircrafts are used for providing trainings, which are given in the headquarter Istanbul. 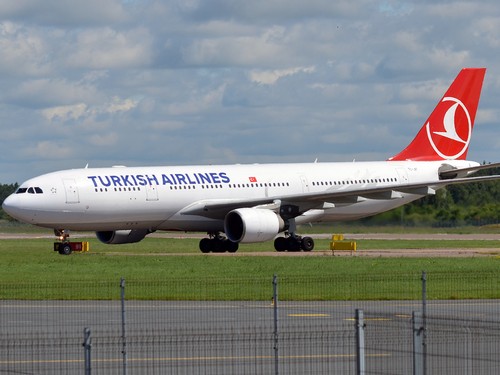 Below is the pricing strategy in Turkish Airlines marketing strategy:

Turkish Airlines is famous for managing an efficient cost structure.

The operational costs are kept minimal to offer best prices for the travelers. Turkish Airlines mainly follows competitive pricing strategy in its marketing mix. Specially with competition emerging in this sector, and upsurge of middle class, price plays the major role, while selecting air tickets. The cost efficiency is managed through better operational aspects, with per seat cost amongst one of the lowest, operating in the same region. Operational efficiency also helps the Brand to maximize profits and thus manage their customers in better manner.

Following is the distribution strategy in the Turkish Airlines marketing mix:

Turkish Airlines has expanded rapidly over the last few years. Earlier the major source of revenue, now these offices are used more for critical time flight management activities rather than selling of tickets, which is mostly done through online mediums. Travel agents also help pushing the sales for Airlines, according to the needs and demands of customers. Turkishairlines.com provides service to book the tickets on their own websites, for which customer loyalty discounts are also available. Other than that, other third party websites also offer ticket booking services. One major competitive advantage of Turkish Airlines, is the hub location at Istanbul in Europe which attracts a huge chunk of air traffic and hence, gives a lot of customer base. Turkish Airlines offers services in more than 120 nations out of total 195 nations round the world. This number is highest for any Airlines company.

It offers a total of 300+ destinations to choose from.

Turkish Airlines has engaged with its customers through aggressive advertising using TV, online ads, print media etc. Television advertisements and even social media ads give huge visibility to the Turkish Airlines. Football icon Lionel Messi, also had been the brand ambassadors for the ads. Companies products are advertised differently, concerned with the markets they are operated in. The local market ads are focused more on cultural values, while global advertisements use the power of stardom, of famous celebrities. Turkish Airlines, actively manages its online presence, through positive internet footprint on Social media and YouTube. It sponsors many events that help it develop a brand for the THY name. It sponsored kits for football clubs in UEFA champions league. It also has become the sponsor for UEFA championship tournament. Involving in such activities gives a major visibility to the airline. Turkish Airlines has been developing its image, through various partnerships. The recent one being partnering with Warner Bros. to the making of Batman v/s Superman. This helps the brand to synergize on the terms of personality with similar customers. Many football clubs, made Turkish Airlines as their official carrier, one major reason was the cost savings it offers along with comfort and status.

Since this is a service marketing brand, here are the other three Ps to make it the 7Ps marketing mix of Turkish Airlines.

Turkish Airlines aircrafts are the great physical evidence of the brand. The best physical evidence is of course number of tickets sold, all the year round. Though various macroeconomic factors like globalization and recession might positively or negatively affect the tourism sector, still tickets prove a somewhat accurate insight into the company’s health. The discounts offered to loyal customers, give an insight into how much the customers are willing to again travel through same airlines. Thus, it gives insight about the quality of services as well. The share captured by Turkish Airlines, as compared to many competitors is competitively higher. Main reason being of its ability to generate more profits and also covering many major cities around the world. THY’s presence is already strong in European regions, though Asia pacific region is not that well managed by the company. Hence. Even the new markets penetration gives an understanding about the growth and future prospects of the company.

Turkish Airlines is driven by its people and each has a specific role to play.

Pilots: Pilots are trained in their own academy as well as hired from outside. These are efficiently trained for safe services and maintain peace and order inside the flights, if need be.

Overseas personnel: For managing overseas operations, THY has a huge pool of overseas employees. Specially they help in minimizing the language and cultural barriers through diversified pool.

Domestic personnel: The employees other than the flight attendants that include managers, finance departments, marketing managers, sales personnel etc. They work from the hub of the company.

Due to maximum number of destinations covered, one major focus of THY is to standardize its service. This gives a better comfort to the customers, as travelers get accustomed to the environment that THY offers. Inside the flight, huge importance is given in providing a warm and welcoming environment to its customers, specially as they consist of a diversified set of groups. Even the food and drinks served are carefully selected, according to the customer base. Entertainment facilities are provided to give a delighted feeling to customers. Many tech supports are involved for providing hi-tech entertainment facilities to the longer journeying clients. After services include luggage facilities, any case of insurances, offering tourism support to the travelers, various holiday packages etc. Hence this completes the marketing mix of Turkish Airlines.

Turkish Airlines is a government owned, Airlines service, based out of Turkey. The Turkish name for the brand is ‘Turk Hava Yollari’, which give it its pet name as THY. The major area of operations for this airlines brand are Africa, Asia, Europe and US. Although major chunk of revenue comes from Europe operations. Turkish Airlines boasts itself as airlines that covers one of the highest number of destinations. Turkish Airlines operates in 120+ nations round the world, with 200+ destinations. Even the strategic location of its headquarter at Istanbul, is one major region of its success, as the area is surrounded by 40% of total international traffics, which makes it easy for THY to attract customers. Major competitors are Emirates, British airways and Qatar Airways.

The growth in the industry has given rise to competition, and growing technology has helped in reducing costs for the industry as a whole. Slogan for THY is ‘Widen your world’.