Southwest Airlines marketing strategy helps the brand/company to position itself competitively in the market and achieve its business goals & objectives.

The product strategy and mix in Southwest Airlines marketing strategy can be explained as follows:

Southwest Airlines is a leading airlines company based out of America. The airlines is known to offer low cost travel to passengers in USA & neighboring countries. Southwest Airlines only uses Boeing 737 jetliner models except during the period 1979 to 1987. During this time, it used Boeing 727-200s. Today, Southwest Airlines have the largest Boeing 737 fleet and operate 4000 flights in peak seasons per day. It is a low cost airline with point-to-point flying feature. It cuts its costs by eliminating on flight meals, on flight movies, skeleton crew on flight. The founders had a simple philosophy and this was reflected in how they operated the airlines. Their belief was, “If you get your passengers to their destination when they want to get there, on time at the lowest possible fares, and make them have a good time while doing it, people will fly your airline”. In the year 1989, the company crossed their billion-dollar revenue mark and became a major airline in the country. Southwest Airlines have pioneered in many fields in the airline scape. It was the first company to provide online booking of tickets, first company to offer ticket less flights, first airline to offer satellite based Wi-Fi services, etc. It has an array of useful features like entertainment channels, movies, games etc. to attract customers to fly with them. These are no fee for changing flight, priority lane access and priority boarding, satellite based internet at lowest cost, low-cost option to choose the desired seating, allowing pets on flight for a small fee, customizable vacation packages etc. For its business class customers it offered features like priority booking, extra reward points, premium free drink. The company is listed on NYSE as well as S&P 500. 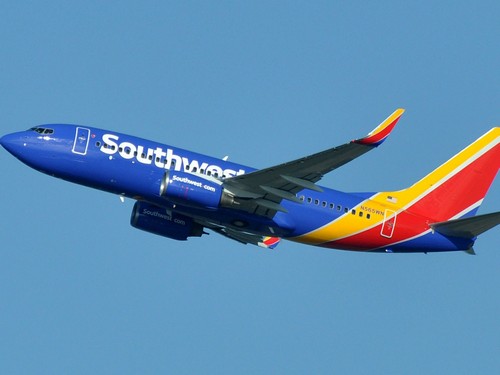 Below is the pricing strategy in Southwest Airlines marketing strategy:

Southwest Airlines is known for offering low cost air travel for its passengers.

Flying, which was earlier considered a luxury, was now made affordable due to Southwest airlines. People thus started to fly more frequently. The company offered low cost fares as a part of its marketing mix pricing strategy to people travelling short distances. It was able to sustain this model due to its no frills policy. It had a skeleton crew of an average of three crewmembers. It did not have an on flight food policy. To increase operational efficiency, it used only one model of Boeing plane. All these factors made Southwest airlines a competitive player in the market. Such effective is the business model of the airline, that it has inspired several airlines across the world to offer low cost & efficient air travel domestically.

Following is the distribution strategy in the Southwest Airlines marketing mix:

Southwest airlines differentiated itself by focusing no frills, short distance air routes in an industry where most airlines focused on longer routes. Other airlines followed the hub and spoke model while flying from one place to another. Southwest airlines emphasized on point-to-point flight, which led to less turnaround time. To provide quality services at competitive prices the airline undertakes various measures. They use secondary airports instead of the primary ones in any city. These airports are less congested, leads to lower expenses. Also, The airlines operates in mid-sized cities to keep operating costs low. Initially Southwest Airlines flew only in Texas. Soon it expanded its operations to other neighboring cities and finally became a dominant, well-known brand in North America.

The airlines has its business operations in over 100 cities & 10 countries.

The airlines have differentiated themselves from the competitors who portray a corporate image. Southwest Airlines uses tongue in cheek humor in the ads and have catchy slogans to grab the attention of customers. Some of them include, “Just plane smart, love is still our field, Low fares. Nothing to hide, you’re now free to move about the country”. Southwest Airlines in the official main sponsor of league baseball teams like San Diego Padres, Baltimore Orioles, Texas Rangers etc. It also was the official sponsor of NBA teams like the Houston Rockets, Orlando magic, Phoenix Suns, Indiana Pacers, etc. The company has gone to great lengths to promote its brand and grab the maximum eyeballs. It has painted two of its airplanes like Orcas with advertisements for SeaWorld. The company bagged the best airline award for its great service. The airline provided ‘Rapid Reward Programme’ for its frequent flyers. It helped them retain the loyal customers and attract new ones with their offers.

Since this is a service marketing brand, here are the other three Ps to make it the 7Ps marketing mix of Southwest Airlines.

Southwest Airlines has over 55000 employees and around 1000 flights. The airline flew to around 4000 destinations on an average, per day. The headquarters of the company is located in Love field neighborhood of Dallas. On September 17 2012, the airline started its first training and operational support centre. It is a two floor building, spread across 100000 sq. feet area and has the ability to withstand an EF3 tornado. Southwest Airlines launched its second training building called Wings. It is spread across 400000 sq. feet area and has modern training features like flight simulators, flight operation training centres, etc.

Garry Kelly is the chairperson of the board, president and CEO. It has more than 50,000 employees, out of which 85% is unionized. The mission Southwest Airlines is to deliver the highest quality of customer service, with warmth, friendliness and company spirit. Its customer service was so good that only a handful customers complained for any issue. Garry Kelly on numerous occasions have been found saying, “our people are our single greatest strength and most enduring long term competitive advantage”. The service of Southwest airlines became very popular. It was a new phenomenon in the carrier industry. This was called the ‘SouthWest Spirit’ of employees. The company was known for its famous policy, “employees first, customers second”

Southwest Airlines targeted mainly two types of customers i.e. price sensitive customers and time oriented travelers. The strategy is to provide low cost flights, which are comparable to roadway traveling fares. During the early days, talented veteran pilots, staff and executives were hired from other carriers to drive the business to great heights. With time, the business gained efficiency. It had an operational time of 25 minutes per flight. Hence this concludes the marketing mix of Southwest Airlines.

Southwest Airlines is the world’s largest low cost carrier, based in Dallas, Texas. Herb Kelleher and Rollin King in the year 1967 launched the airline by the name Air Southwest. It was later renamed to Southwest Airlines. From 1971, the airlines started its operations. It operated only in the state of Texas.

From the year 1978, the airlines started plying to the neighboring states. During a peak travel season, the company can operate more than 3000 flights in a single day.