Marketing Strategy of TGI Fridays analyses the brand with the marketing mix framework which covers the 4Ps (Product, Price, Place, Promotion). There are several marketing strategies like product innovation, pricing approach, promotion planning etc. These business strategies, based on TGI Fridays marketing mix, help the brand succeed in the market.

TGI Fridays marketing strategy helps the brand/company to position itself competitively in the market and achieve its business goals & objectives.

The product strategy and mix in TGI Fridays marketing strategy can be explained as follows:

TGI Fridays or TGIF offers a unique fun and casual dining experience to the patrons. It started with the concept of providing venue to young people for socializing and networking. The restaurant initially served American cuisine, bar food and beverages as a part of its marketing mix product & service strategy. The menu offered by TGIF is appealing to diverse customer palate. The food offered includes appetizers, burgers, sandwiches, pasta, steaks, salads, soups, side dishes, drinks and desserts. They also offer platters for big groups and kid friendly menu. TGIF has included the statutory warning concerning the possibility of food-borne illness on consumption of raw or uncooked meat, poultry, seafood, eggs or shellfish. TGIF is well known for signature items like loaded potato skins, chicken fingers, Buffalo Wings, Jack Daniel's Grill ® an classic drinks like Signature Margarita and Ultimate Mudslide. Till 2006 the menu included Atkins approved appetizers, entrées and desserts; however later on dropped. It still serves lo carbohydrate and low fat food. In UK, gluten free options are also available. 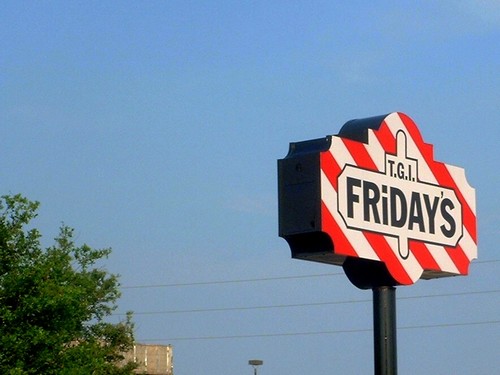 The IPO of TGIF was opened in 1983 with Goldman Sachs, same year it crossed number of stores 100.

The highest grossing store of the chain is located at Haymarket, Liecester Square, London. It is also most popular and financially successful. In this operation, most of the outlets are owned by franchise. The biggest franchise in USA is The Briad Group, New Jersy. The prices of at TGIF are affordable, considering the quality offered. The prices of the menu can be accessed through the restaurent region specific website as well as the third party websites and apps. TGIF has the gift cards on offer wherein a

Following is the distribution strategy in the TGI Fridays marketing mix:

First TGI Fridays restaurant was opened in Manhattan, at first Avenue and 63rd street, New York in 1965. Later on in partnership with his college mate Ben Benson, more restaurants including Tuesdays, Wednesdays, Thursdays and Ice-cream Sundays were opened. The first franchise of the TGIF were opened in Memphis. Another eight restaurants were opened in important MId-West cities by second founder Daniel Scoggin. He opened a new prototype restaurant with raised square bar and multilevel dining in Dallas. First restaurant outside USA was opened in Uk in partnership with Whitebread. Now it is located in more than 60 countries worldwide with around 931 restaurants. The organization has sports bar like set up in two of its restaurants called Fridays Front Row Sports Grill.

TGIF restaurant is a pioneer in the concept of singles bar. Before this, the only venue for young ladies particularly, was private cocktail parties. Thus in a way it caused social revolution. It was the first establishment to offer ‘Ladies Night’. The restaurant gained tremendous popularity and coverage in newspapers and magazines. The restaurant chain has social presence on Twitter, Facebook and Instagram. I has launched numerous promotional activities as well. It has reward program wherein the member gets the additional benefits like free chips and salsa with every visit, invitation to special events and other rewards. It organizes frequent events in the restaurant and its information is available on its website, app and social network pages. Some of the event are Oktoberfest, Vegetarian Food Fiesta. etc

Since this is a service marketing brand, here are the other three Ps to make it the 7Ps marketing mix of TGIF.

As the establishment is for you young crowd, the server and wait staff are also young, energetic and follow specific dress code of the organization. The staff celebrates the birthday of a customer by cake and special birthday song. TGIF takes pride in the Courteous service and pleasant demeanor of their staff. They serve 25000+ patrons worldwide every year. TGIF celebrates individuality in the staff and encourage the self expression. The qualities TGIF looks for in the employee are code of integrity and commitment.

The philosophy of TGIF is giving your 100% to your task in hand and this they follow in every aspect be it launch of new outlet, hiring staff or preparation of food. For training of the upcoming restaurant, TGIF sends experiences TGI Fridays personnel to the new operation. The help in creating signature decor and ambience thus, consistent experience, hiring and staffing. TGIF has developed their own training program for the Unit Managers to understand the importance of customer service and experience. The restaurant has walk in as well as pre-booking services. After the new design Dallas restaurant was opened, the face of the brand changed. Now it was also a casual daytime dining place for families. After the company became public, a template for future international franchise was developed. The company was again privatized in 1989 and again the focus was changed to family dining.

The early restaurant had red and white stripped awning and blue paint it was the typical of Gay Nineties theme and had Tiffany lamps, wooden floors, Bentwood chairs and stripped tablecloths. The bar had the peculiar decorative elements like brass rails and stained glass. TGIF believes in giving best ambience through its decor which includes some significant memorabilia like propeller and racing scull. The music played in the restaurant is specifically chosen and recorded. It is maintained uniform in all the outlets worldwide. Keeping with times, the interior of the stores has changed over the years. It has wallpapers, granite exteriors and red and white stripped lamps. The exteriors have stucco and have specific F shaped handles on the main door. Also, the metal cup above door has strip with line 'In here, It's always Friday'. Hence this completes the marketing mix of TGIF.

TGI Fridays or TGIF was founded by Alan Stilman, a perfumist by trade.

He wanted to attract a trendy crowd of models and stewardess's and offer them a joint to relax and upgrade his beer joint. Currently it owned by Sentinel Capital Partners.