Argos marketing strategy helps the brand/company to position itself competitively in the market and achieve its business goals & objectives.

The product strategy and mix in Argos marketing strategy can be explained as follows:

Argos is one of the leading retail chain brands based out of UK. The catalogues are produced twice a year and they have around 1600 pages. Argos typically have the pictures of the item, a small description, the price and the catalogue number. The copies available at the shops are ring bound and all the pages are individually laminated. While its products in 20th century were very limited, so Argos added a range of new products as a part of its marketing mix product portfolio. In one year it had added twice the number of products as it had in last 4 years. It has also moved into furniture and refrigerators and personalised care such as pet services and insurance. Being the market leader and having around 75% of population shopping at Argos, it doesn't think of proliferation into new customers rather than making the existing customers satisfied. It changed its logo in 1998 as to change the perception from been seen as boring. Recently in 2018, it again changed its logo to include more colours to appeal as a vibrant brand serving a wide variety of products. It also has several brands of its own such as Challenge, Cookworks, Visiq, Pro fitness etc. 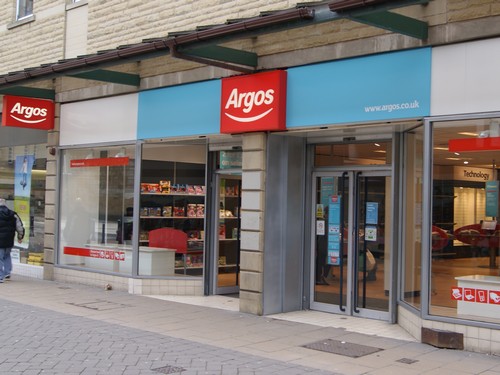 The main pricing strategy of Argos has been on providing low prices.

Low price DVDs and CDs also strengthen this approach by management team. Ultimately, Argos maintains close relationships with suppliers in order to avail lowest costs to its low selling prices. It has some products differently priced in Ireland as compared to United Kingdom.

Following is the distribution strategy in the Argos marketing mix:

Argos catalogues are approximately believed to be in over 75% households. They are available both online as well as in physical shops. From 2011, they were telecasted over television on sky channel 600+. It has around 850 stores scattered all over UK and Ireland.

Internationally, Argos had launched its stores in Mumbai, India in 2007 which it closed after two years.

Argos relies on good promotional strategies to ensure customers are aware about its offerings. The main source of promotion has been direct advertising. It has undergone many advertising campaigns. One such example is "the get its and don't get its" series of ads. Other source of promotion would be the word of mouth. Due to its low pricing strategy it always stays as a topic of discussion among the buyers. Argos also publishes ads through print media, online banners, social media engagement etc.

Since this is a service marketing brand, here are the other three Ps to make it the 7Ps marketing mix of Argos.

Argos employs around 30000 employees across all its channels. It has to stay updated with its product range and new upcoming varieties. So a lot of employees work on the market research. Argos believes in a very friend work environment. Being predominantly present in UK, the employees are locals who are well versed with the products that it offers.

Argos catalogues feature a range of products with descriptions and prices of the products. Once the order is made either over phone or online, the order goes to the seller who then confirms it. Then the delivery division looks after the shipment and procurement leading to a faster and safer mode of arrival.

Argos catalogues can be seen throughout UK. In almost every households, they are brought just for the sake of being brought. These catalogues have been used for decades, so they run also as an option of window shopping. They are also seen as a good pass time and are often seen in workplaces too. This completes the marketing mix of Argos.

Argos Ltd is a catalogue retailer which operates its business in UK. It is a subsidiary of Sainsbury's. Its catalogues are sold online as well as offline. There are nearly 850 retail shops and the number of customers are over 29 million per year. Argos has also franchises outside UK in countries such as China. Argos was founded in 1972 by Richard Tompkins who was also the founder of Green Shield Stamps scheme.

It has an operating income of 83 million pounds and it employs around 30000 employees. It has its headquarters at Milton Keynes, Buckinghamshire, England.