Universal Studios marketing strategy helps the brand/company to position itself competitively in the market and achieve its business goals & objectives.

The product strategy and mix in Universal Studios marketing strategy can be explained as follows:

Universal Studios is one of the most popular film studios and theme parks, which are a global attraction. The studio is spread over the huge area. About 70% of its area lies in county island known as Universal city. The rest of it lies in LA, California. The studio is also used to give tours to enthusiasts in exchange for a minimal fee. Soon, Universal Studios theme park chain was launched in various parts of the world as a part of its marketing mix product & service strategy. The Universal city has various world class hotels like Hilton & Towers, the Sheraton Universal Hotel, and Universal City Walk. These offer its visitors with shops, restaurants, a state of the art 18-screen Universal Cinema, golf courses, night time entertainment features and a seven-story IMAX theatre. Some of the world-famous films produced by Universal Studios are Jaws, E.T, The Mummy, Jurassic Park, the wolf of wall street, Dracula, etc. To wow its customers and separate itself from Disney, it hosts Halloween horror nights and various other exciting events for its customers. 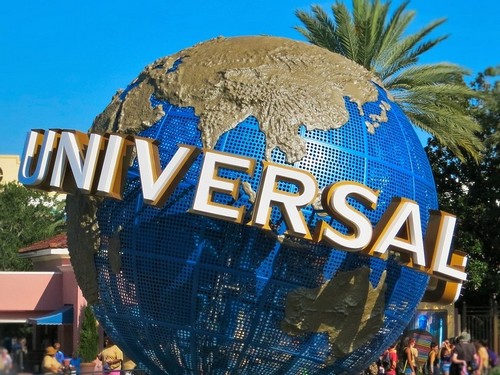 Below is the pricing strategy in Universal Studios marketing strategy:

Universal Studios is in cutthroat competition with Disney, Paramount, and many other major studios.

Thus, it keeps the prices of its products competitive. Universal Studios theme park needed to delight their customers. So other than providing new entertainment features in their park, they also charged prices lower than their main competition, Disney. It is still not as popular as the Disney theme park, but it is making a name for itself. The company earns revenue from TV services, streaming services like Netflix, Amazon Prime, the sale of DVDs and broadcasting at multiplexes. The company signs contracts with producers and distributes them in specific regions. Pricing is done keeping in mind the film budget and the region where it is distributed.

Following is the distribution strategy in the Universal Studios marketing mix:

The Universal Studios is located in LA, California. Its main theme park is located in Orlando. The studio is spread across in various other locations like Singapore, Japan. The company plans to open more studios and theme resorts at Beijing and Moscow by 2022. The company has a wide distribution network It uses physical stores, online shops, TV, Internet to distribute its products. DVDs of newly released films are easily available in retail stores and supermarkets.

New TV Shows, movies are instantly available to be streamed or downloaded.

The logo of Universal Studios features a globe with Universal Studios written in front of it. It resembles how everything and everyone in the world fit into the world of Universal Studios. It is quite iconic. The typography of the font is bold and is golden in color. Other than this, the brand does not need any promotion for its products are subjects of the promotion itself. Movies like Jurassic Park, The Wolf of Wall Street, Despicable Me has made Universal studios an esteemed brand and a household name. The company gains an infinite amount of publicity from their chain of theme parks established all around the world. The brand has created an image in the market which appeals to people of all age. Association with the brand for people becomes a matter of honor for them.

Since this is a service marketing brand, here are the other three Ps to make it the 7Ps marketing mix of Universal Studios>

The company has a large number of employees from across the globe. This makes the employees of the company multicultural. There is no discrimination in the company among employees based on nationality, gender, religion. The company is being led by Ronald Meyer (vice chairman), Jeff Shell (chairman). Eminent screenwriters have worked for Universal Studios in the past and still do. Some of them include Richard Schayer, Robert Douglas, and Steven Speilberg.

Universal Studios has various processes of working on different projects. Usually, the studio provides all the setup and ties up with directors, screenwriters, producers, actors to create media. They also tie up with YouTube and other streaming services for hosting the wide range of content.

The physical evidence of its services is found in form of its studio, theme parks, media content, and soundtracks. Its products can be found packed on the racks of various stores in supermarkets. This completes the marketing mix of Universal Studios.

It is the 4th largest among the ‘big six’ American studios. It is based in San Fernando Valley region of LA, California.