Marketing Strategy of Costco analyses the brand with the marketing mix framework which covers the 4Ps (Product, Price, Place, Promotion). There are several marketing strategies like product innovation, pricing approach, promotion planning etc. These business strategies, based on Costco marketing mix, help the brand succeed in the market.

Costco marketing strategy helps the brand/company to position itself competitively in the market and achieve its business goals & objectives.

The product strategy and mix in Costco marketing strategy can be explained as follows:

Costco is one of the top retail chain brands in the US. Costco has a wide range of product offerings in its marketing mix as per the needs of the customers. From difficult to handle products such as art, caskets, clothing, books, computer software, wines, furniture, home electronics, home appliances, jewellery, solar panels, pharmacy goods, perishable items like dairy, flowers, fresh fruits and vegetables etc. With a greater focus of selling value for money products and in large volumes Costco achieves economies of scale effortlessly. The products are bulk packaged and sold to businesses or large families. When the products are the same Costco does not carry multiple brands or marque. 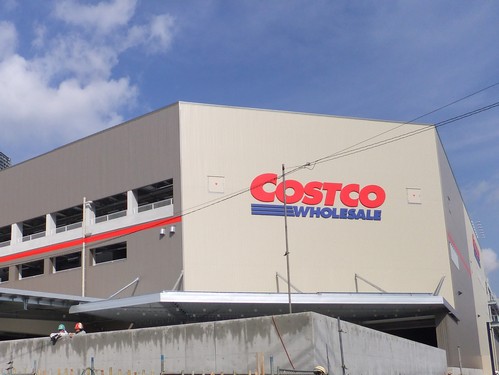 Hence pricing is a strategy in its marketing mix which is critically dependent upon the competition, amount of goods sold etc. Costco is known for having specially low prices for bulk purchases, and also special prices on limited edition goods. Costco’s main business thrives on giving low prices to customers on high volume purchases. People who become members of Costco membership can avail special prices and discounts on the goods being sold.

Following is the distribution strategy in the Costco marketing mix:

Although Costco’s former competitor was based in California, Costco has its headquartered for worldwide operations in Washington. Costco had 700+ warehouses all over the world United States of America having 500+, and close to 100 in Canada. Costco also has its business presence in Taiwan, UK, Mexico, Japan, Australia, South Korea and Spain.

Being extremely thrifty with advertising budgets Costco believes in either ambush marketing or heavy discount promotions. Its treasure hunt which allows customers to buy luxury items at greatly reduced prices. Part of its brand building was also a direct result of a documentary on CNBC called The Costco Craze, Inside the warehouse giant. Costco also campaigns on online social media platforms and promotes its sales and discount schemes through targeted Newspaper and Radio advertisements.

Since this is a service marketing brand, here are the other three Ps to make it the 7Ps marketing mix of Costco.

Costco is a leading retail chain and hence gives priority to its customers as well as staff. The Washington CEO magazine rated it as one the top 3 companies to work for. Having developed a cult following for being pro employee and advantageous to thrifty shoppers. Regularly Costco’s employees are ranked as one of the most competent and loyal, owing to the frequent people development programmes and higher than market compensation and benefits. In the Human Resources Equality Index, Costco scored very highly in terms of gender inclusion and work place equality.

Being a membership warehouse club, Costco stands for value pricing and quality brand name in merchandise. Apart from providing a wide selection of several options in merchandise it combines the speciality department and its associated convenience to provide an unmatched shopping experience. Other than this Costco also offers free concierge services to premium services purchase members. It is also the 2nd largest seller of auto parts in US.

Costco’s biggest physical evidence are its stores, warehouses and food services. Costco is also one of the biggest Pizza sellers in USA with over 400 stores. In the USA its major competitor in the operating membership warehouses is Sam’s Club. It employes more than 174000 part and full time employees while in 2016 it had 85 million members. Being 18th in the list of fortune 500 companies Costco’s robust supply chain management systems and strategic planning for procurement and retail helped it achieve a cult status. Hence, this covers an overview in the marketing mix of Costco retail brand.

Costco Wholesale is a global retailer which specializes in warehouse club operations in 8 countries and is known for its dedicated quality and good business ethics. Costco is the largest American warehouse club which provides a huge selection of merchandize and after Walmart is the 2nd largest retailer in the world. In 2016 Costco became the largest retailer of choice and prime beef, chicken rotisserie and organic foods as well as wine. Its first location was opened in 1976 was in an airplane hangar in San Diego serving small businesses while the first warehouse location was in Seattle.

Costco grew from nothing to a 3 billion dollar organization in 6 years. After merging with Price Club with $16 billion in annual sales in 1993.