Marketing Strategy of Expedia analyses the brand with the marketing mix framework which covers the 4Ps (Product, Price, Place, Promotion). There are several marketing strategies like product innovation, pricing approach, promotion planning etc. These business strategies, based on Expedia marketing mix, help the brand succeed in the market.

Expedia marketing strategy helps the brand/company to position itself competitively in the market and achieve its business goals & objectives.

The product strategy and mix in Expedia marketing strategy can be explained as follows:

Expedia is one of the leading travel portals which offers flight bookings, holidays, hotels etc. What sets the company apart from the company is that it has the largest catalogue of offerings across all segments. One can choose from over 150000 hotels and 300+ airlines. Expedia’s mobile and web-based solutions are very technology driven and aims to simplify problems faced by travel enthusiasts. It meets the need for consumers by providing a wide variety, easy access, deals and coupons and most importantly, feedback from users. The products of Expedia are for travellers of all types. They range from businessmen or women to leisure travellers. The company provides various services as a part of its marketing mix like vacation packages, car rentals, flight bookings, hotel bookings, cruises, things to do at the destination, etc. The company is innovative and has pioneered the online travel industry. Expedia has revolutionized the way people research, plan and book travel. 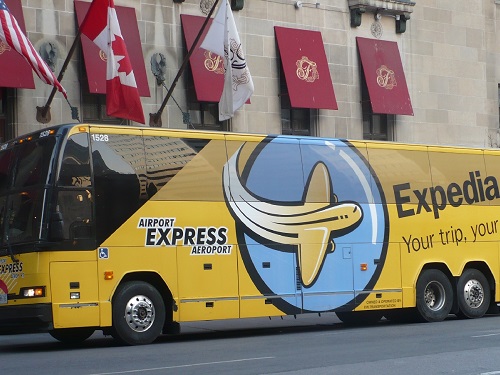 The pricing of the services of the company is done keeping in mind that the company's motive to tap the major chunk of the demographics, that is the middle class. The company also provides premium services mainly targeted towards the high-end customers.

Following is the distribution strategy in the Expedia marketing mix:

Expedia has its headquarters in Bellevue, Washington. The building in which the office is located is known as Expedia building. The company has localized its offerings according to the needs of various countries it is located at.

Expedia stood third in the list of most admired internet companies, after IAC and Google. It was also named Americas best-managed companies. The company was the first one to launch mobile eternity, new find your campaign. It also won the mobile app awards. The company won the People’s Voice award. The company is very active in social media and engages deeply with its customers, launches frequent campaigns which have been a hit with consumers. Expedia launched an online campaign called Friend trips. Post this, more than 200000 friends were invited by people on planes to travel to partnering destinations. More than 20000 stores and photos were uploaded. It is evident that the Friend trips campaign not only fired up its Facebook page but also increased its total bookings. Expedia is also present in video websites like Youtube always uploading new content, campaigns and keeping its audience engaged. The company follows up to its users via regular tweets. It also listens to its customer's grievances on the same platform.

Since this is a service marketing brand, here are the other three Ps to make it the 7Ps marketing mix of Expedia.

Under the name, Expedia Inc lies a host of brands catering to its wide base of customers. They are, Hotels.com, Hotwire, Egencia, Elong.com, Venere.com, Media solutions. The company is backed by able supply relationship teams. These teams comprise of more than 1000 travel industry experts and revenue management experts. They are located in places all around the world. These teams work closely to achieve their distribution objectives.

Rich Barton, the first CEO of Expedia said that the word Expedia comes from the combination of exploration and speed. In March 2017, Chelsea Clinton was named to the board of Expedia. The company is spreading over more than 60 countries and employs more than 150000 people. The workforce is a mix of a diverse group of people from different expertise and cultures.

Expedia is the world’s largest travel company and is situated in more than 30 companies. Its physical evidence can be seen on its online websites, apps and its host of subsidiary companies. Its apps have been downloaded over 16 million times. The company caters to over 60 million travellers each month in over 60 countries. This concludes the marketing mix of Expedia.

In 2015, the company acquired Travelocity, Orbitz, HomeAway. All these companies became a part of the portfolio of Expedia, making it the biggest company in the travel segment.