Hard Rock Cafe marketing strategy helps the brand/company to position itself competitively in the market and achieve its business goals & objectives.

The product strategy and mix in Hard Rock Cafe marketing strategy can be explained as follows:

Hard Rock Cafe started off as a burger joint, where customers could relax, have burgers and enjoy the ambience of the Rock 'n' Roll themed restaurant. Hard Rock Cafe carved a niche for itself years ago when it differentiated its services from other restaurants which at that time had a formal environment, strictly enforced dress code and certainly did not offer hamburger, milkshakes and music by The Rolling Stones. Today, Hard Rock Cafe offers barbecued ribs, burgers, milkshakes, apple pie, sundaes, corn-on-the-cob as well as a variety of beer and hard liquor. Hard Rock Cafe offers Tee-shirt, Shirts, Outerwear and accessories with the Hard Rock Cafe logo through its outlet called the Rock Shop. On top of this, they also have collectibles like pins and music instrument accessories. The brand has tried to diversify itself over the years by opening up Rock Hotels, Casinos and Resorts. Hard Rock Cafe also hosts live concerts in its own venue called Hard Rock Live where a large number of famous artists have performed all across the globe. 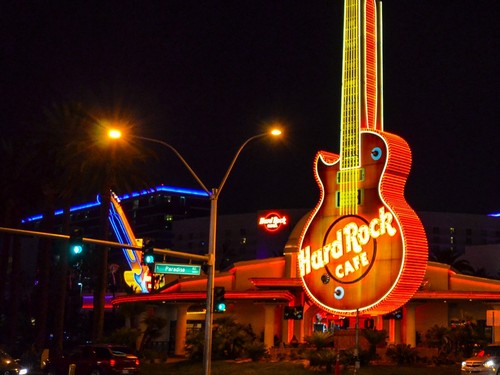 Different products by Hard Rock Cafe are available at different price levels based on the nature of the product being offered.

When it comes to the Hard Rock Cafe restaurant, the brand follows a mid-pricing strategy to attract customers. Also, customers can earn loyalty points on each purchase which they can redeem in the form of merchandise. Hard Rock Cafe also gives away freebies on a purchase which is above Twenty-five dollars. The products available at Rock Shop come at a high price range, this is done so to maintain the brand equity and product differentiation that is associated with the celebrities that have either donated a memento, performed live or both at Hard Rock Cafe. Other services offered by the Hard Rock Cafe brand such as hotels, resorts and casinos though premium priced as compared to the other products offered by the brand itself are at par with similar services offered by other brands in that service vertical.

Following is the distribution strategy in the Hard Rock Cafe marketing mix:

With the rise in popularity of American culture and the never dying craze for Rock music is just fueling the expansion of the Hard Rock brand to more locations.

Hard Rock Cafe follows some traditional forms of promotion including digital print, newspaper, billboards in key locations and TV advertisements. Due to nature of the Cafe, it has garnered a lot of celebrity attention which has led to its popularity and auto promotion. Over the years various music legends have performed live at Hard rock Cafes and have also donated their instruments to the brand. It also hosts a festival called Hard Rock Calling which has seen some of the world's biggest music maestros perform like Paul McCartney, Stevie Wonder, Bon Jovi, The Who, Pearl Jam and Aerosmith to name a few. The Hard Rock brand is also known for promoting charity events and other CSR activities and have been associated with organisations like PETA (People for the ethical treatment of animal), Friends of the Earth and Elton John AIDS Foundation.

Since this is a service marketing brand, here are the other three Ps to make it the 7Ps marketing mix of Hard Rock Cafe.

The moto of Hard Rock Cafe is Authentic. Passionate. Philanthropic and this is what the company believes in. It incessantly in search of people who are passionate about music and make a mark in their career. The brand is also known to care and respect its employees and is evident from the example of Rita Gilligan has been working for Hard Rock Cafe since 1971 and still appears at openings and promotional events.

Hard Rock Cafe bases its marketing techniques on music mainly rock and roll and its collection of memorabilia. There are several business processes of the brand which is standardised at all its worldwide outlets. Business processes are focused on customer delight and ensuring stream-lined efficiency in services.

The interior of Hard Rock cafes are covered with objects from the rock and roll world and is an eye for the sore eyes of any music lover. The chain also offers excellent food and hence is much loved by its customers. Hence this concludes the marketing mix of Hard Rock Cafe.

Hard Rock Cafe was founded by Isaac Tigrett and Peter Morton on June 14, 1971, in London. It is a chain of theme-based restaurant which was inspired by a love for American music. The restaurant is known for its ambience and decor which is inspired by rock music. It initially had an eclectic decor which changed to memorabilia. One of the first memorabilia of the chain was a guitar donated by Eric Clapton. This trend snowballed and by 1997 Hard Rock Cafe had 35,000 donated memorabilia to its name. These pieces to this day are rotated periodically from restaurant to restaurant all over the world. The logo of Hard Rock Cafe is nothing less than revolutionary and was designed by Alan Aldridge and the inspiration for it came from the Chevrolet Logo. The founders wanted the logo to be blue, white and red but decided against it. Hard Rock Cafe opened for the first time in the U.S, Los Angeles in 1982.

It went on to expand to Asia, Tokyo in 1982 and went global in the truest sense. Hard Rock Cafe was sold to Seminole Tribe of Florida in 2007 and has its headquarters in Orlando, Florida.