Marketing Strategy of Omega analyses the brand with the marketing mix framework which covers the 4Ps (Product, Price, Place, Promotion). There are several marketing strategies like product innovation, pricing approach, promotion planning etc. These business strategies, based on Omega marketing mix, help the brand succeed in the market.

Omega marketing strategy helps the brand/company to position itself competitively in the market and achieve its business goals & objectives.

The product strategy and mix in Omega marketing strategy can be explained as follows:

Omega SA is a brand that is well known across the globe mostly for its premium watches. People generally connect these watches with the social status. It is always known for its quality product and world class services to its customers. Omega have always been the first mover in watch sector and they have enjoyed getting the first mover advantage. They have always come up with unique products that fascinate the whole world. The product strategy in the marketing mix of Omega focuses on giving high quality and premium watches to customers. “Omega Speed master Professional chronograph” watch was the first watch that was worn by Buzz Aldrin on moon. They were the first watch manufacturing company to come up with tourbillion wristwatch calibre in the year 1947. In the year 1999, they came up with a watch that had coaxial escapement invented by George Daniels marked companies one of the great milestone. Again in the year 2007, they came up with models such as calibres 8500 and 8501. They are also trying to make a watch which will be first of its kind that is resistant to magnetic fields greater than 1.5 tesla. Omega have separate category for men and women. For men they have Omegas Seamaster, Omega speed master, De Ville and Genève. Women collection includes Ladymatic, Specialities, De ville and many more. 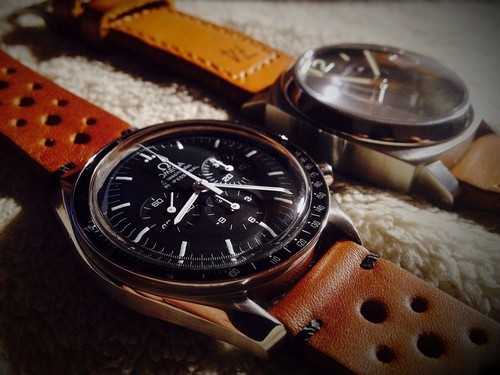 Omega is one the best known luxury watch brands in the world.

Price is one of the important aspects for watch manufacturing company when they target premium and luxury segment. Though they are rich and wealthy, still they want value as they will be spending huge chunks of money to buy these products. The watches usually start at around $1000, and can go up to $50,000 for the exclusive range. Pricing is mainly affected by other’s marketing decision. Omega SA is always known for its product quality. That is the reason, it is the market leader. It has been seen that Omega SA avoids competition based pricing strategy in its marketing mix. Rather its focuses on strategy where it promotes non-price benefits to its customers. That is where it differentiates itself from other luxury watch manufacturers. Omega always keep their prices in such range that the customer feels that they are having highest quality watches at best prices.

Following is the distribution strategy in the Omega marketing mix:

Omega watches are present and accepted across the globe. People from different parts of the world use Omega watches as it increases social status for them. It is because of their global supply chain management, Omega is able to sell watches to all its subsidiaries that are well recognized. They have around 200 agents that provide them with the updated information about sales, inventories and orders. This information helps them to cater to the customers in a much better way. Omega also have more than 10,000 retail stores across the globe that is strategically positioned such as in airports, boutiques to provide an easy access to the customers. With the growth of ecommerce, the watches are available through the company website as well as leading multi-brand online portals.

This tells us about the place and distribution strategy in the marketing mix of Omega.

Omega use extensive level of promotion to catch hold of the customers. They advertise their products in magazines through which they target people who are high reputed and famous readers. Whenever Omega come up with new product in the market, they hold five star events and gives public releases in order to promote it. They always brand their product through various people such as Omega Seamaster series is branded by athletes and male actors. Constellation series is branded by female athletes and actresses. If we see the advertisements, they mainly have young male adults as they try to target that segment. They also promote through series and movies which strengthens their positions. Hence, Omega marketing strategy and marketing mix is concluded as above.

Omega SA, one of the world’s best watches manufacturing company is based in Bienne, Switzerland. Omega SA Company was founded in the year 1903 by Louis Brandt and belongs to Swatch Group. It generally targets luxury segment that are rich and wealthy. It has many achievements that are precious memories for the company. Royal Flying Corps, based in Britain selected Omega as its official timekeepers for those units that were struggling to perform in 1917. In 1918, it was even selected by American army. Omega watches were the first watches to reach on moon in 1969. Even NASA prefers to have omega watches in its laboratories and offices. Addition to it, Olympic Games has been keeping Omega watches as the official timekeeping device since 1932. Most of the celebrities prefer wearing these watches in films and serials.