Mountain Dew marketing strategy helps the brand/company to position itself competitively in the market and achieve its business goals & objectives.

The product strategy and mix in Mountain Dew marketing strategy can be explained as follows:

Mountain Dew is one of the most famous beverages which has its presence all over the world. Mountain Dew has traditionally been a yellow-green drink, packaged in green bottles. It has a citrus flavour, less carbonated, more sugar and high caffeine levels. The brand has adopted product adaptation strategy as in some countries Mountain Dew has less caffeine levels. The brand produces non-alcoholic carbonated soft drinks. Over the years the brand has diversified its product portfolio in its marketing mix by moving towards more hygienic drinks like Diet Mountain Dew. The brand has also diversified the flavour of soft drinks produced such as Raspberry Citrus, Blueberry Pomegranate, Blood Orange, Watermelon, Orange Mango, Mango Lime, Black cherry, Midnight Grape, and Citrus Orange. The flavours other than original Mountain Dew and Diet Mountain Dew are sub branded as Kick start line of products. Beside the global variants which are very often not marketed in some countries, the brand also produces drinks for the local taste and flavour like in India it has Mountain Dew Neon as a variant to original Mountain Dew. 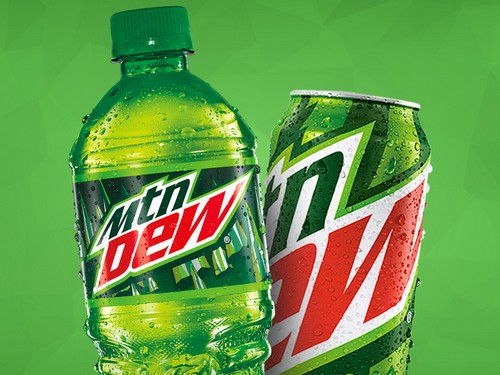 Mountain Dew has adopted competitive pricing strategy due to highly competitive market of carbonated soft drinks around the world.

The brand revises and adapt its price as per the geography and competition in the market. Mountain dew’s prices for the two product lines of kick start and original are slightly differentiated. However, the prices across the flavours are mostly same. The major objective of such competitive pricing is to capture market share by lowering the profit margin per unit and obtaining the profit through economies of scale. Mountain Dew sometimes uses bundle prices where it bundles the new offering with the popular product at the discounted prices to promote the new product. Mountain Dew often offers goodies like game toys, clothing, and other freebies with the soft drink packs to increase the enthusiasm of the target consumers for purchasing its products.

Following is the distribution strategy in the Mountain Dew marketing mix:

Mountain Dew is available across six continents of the world. Its products are sold in almost all the countries like USA, UK, India, Canada, Australia, Germany, New Zealand, Philippines. The company sell its product through the traditional retail channels. Mountain Dew has the advantage of strong Pepsi distribution network as a part of its marketing mix. The products are supplied to the market through three channels, Direct Store Delivery(DCD), third party network and customer warehouse. Through third party network mountain dew line of products are distributed in restaurants, businesses, sports stadium, and schools. In DSD system the product is delivered directly to the retail stores. In customer warehouse channel, the company supplies product at the warehouse of distributor who in turn sales to wholesaler and retailers. PepsiCo deploys these channels as per the market structure.

The company sales mountain dew’s other merchandises like clothes, mug, helmet, and cap through e-commerce platforms like Amazon.

Mountain Dew’s target segment is young consumers and its promotion strategy is aimed at placing the Mountain Dew brand as the choice of sports inclined consumers. Mountain dew uses 360-degree marketing through Above the line (ATL) and below the line (BTL) platforms. In ATL, brand promotes the product through TV advertisement, billboards, print media such as newspaper and magazines. Mountain Dew has formed partnership with Warner Bros film production house which produced The Dark Knight rises. Mountain Dew’s social media accounts on Facebook and Twitter are used by company to promote its new theme of advertisement. In BTL campaigns, Mountain Dew has sponsored games through 1990s. Mountain Dew has been sponsoring action sports like skating, snow skiing. The company started Green Label Gaming program though which it extended its sponsorship to independent video game developers and designers. The company started DEWmocracy in 2007 where Mountain Dew fans design new flavours to be made. Regional Dew promotion campaign was launched to enthuse the fans to create potential names and labels to be used by same variant of product in different geographies. Hence, this completes the Mountain Dew marketing mix.

Mountain Dew is the carbonated soft drink brand owned by Pepsi. Mountain Dew was first formulated in 1940 by Barney and Ally Hartman of Tennessee, United States. The brand was taken over by PepsiCo in 1964. The brands parent company PepsiCo is headquartered at New York, United States. In 2011 Mountain Dew sales were around USD 8 billion combined with its diet version. Industry forecast for the global soft drink market is positive with market estimates showing its growth between 2013-2018 at a CAGR of 3.92% and 3.18% in terms of revenue and volume, respectively. However, market trends in 2016 suggested a shift of consumer preference from carbonated soft drinks to health oriented soft drinks to meet their nutrition needs. Its major competitor brands include 7 UP, Limca, Sprite, Surge.

Mountain Dew is the second most valuable soft drink brand of PepsiCo behind Pepsi. The brand was launched in India in 2003.